You’re A Woman – For Break The Machine 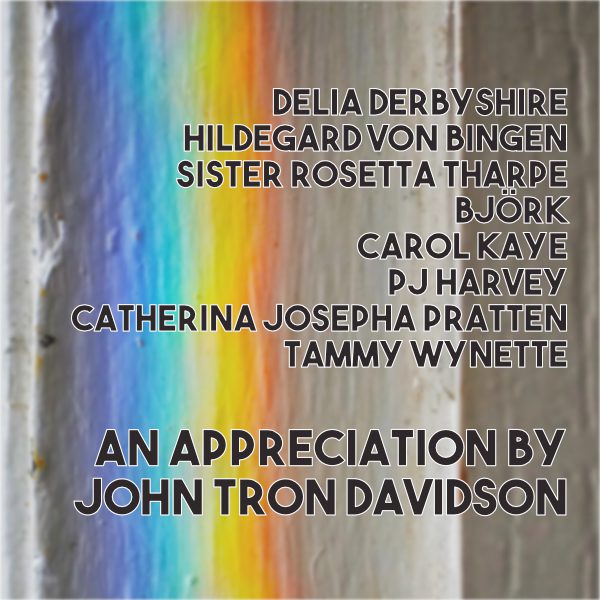 Originally posted for Break The Machine – head over to http://www.breakthemachine.co.uk for the maximum pedal ace!

It seems insane to be writing about this in the era of limitless information and human connectivity, but the epithet ‘female-fronted’ is still very much a thing. Much has been written about the patriarchal nature of rock and heavy music particularly, but instead of bemoaning the lack of coverage afforded to women, I’m going to talk about some of the people who aren’t men that made a big difference in the music world, and give you a chance to get stuck into some artists you might not have encountered.

Delia Derbyshire
One of the names bandied about most often in the ‘women in music’ sphere, it’s worth remembering that Delia was a colossus in the development of electronic music. Though the majority of people point to her creation of the theme from Dr. Who, she was active at the Radiophonic Workshop from 1960 onwards, creating music under the name White Noise, working at the Electrophon Studio, and producing film scores. The music and sound effects she created during her tenure – in an era where if you wanted a particular sound, you had to make it – directly influenced the development of electronic music, not to mention fostering in generations of fledgling artists a truly gung-ho approach to the creation of sound. See also: Daphne Oram

Hildegard von Bingen
Not just a composer but an actual saint, the Sibyl Of The Rhine was a writer, philosopher, visionary, polymath, and is credited with the foundation of scientific natural history in her native Germany. Literally physically sickened by not committing her visions to paper, she finally acquiesced and composed a minimum of sixty-nine pieces of music, the largest known body of work from a medieval composer. Many others are believed to have existed but have been lost. In addition to 400 letters to dignitaries of many different offices, she also created a language called lingua ignota which had its own alphabet, which is something you’d never see Steel Panther do. See also: Louise Farrenc

What do Little Richard, Elvis Presley and Jerry Lee Lewis have in common? They all followed in the footsteps of Sister Rosetta Tharpe. A titan in the world of gospel, she had a towering influence over the British blues boom of the ‘60s, casting a monumental shadow over the future works of Clapton, Beck and Keef, as well as being one of the first players to use heavy overdrive. She brought a previously unknown swing and urban aggression to gospel, spanning 17 albums, and influencing generations of electric blues players in the process. See also: Bessie Smith, Memphis Minnie

Madder than a burning house, Iceland’s fearless chanteuse has spent an entire career torching the notion of what a successful musician should be, whether electing to tour her records with only flutes for accompaniment or releasing her albums in an interactive, re-orderable format. It’s easy to think of It’s Oh So Quiet as all she’s done, but with a discography spanning 40 years and 9 solo albums – not including her early work with the Sugarcubes and any number of collaborations – Bjork has fully ignored the notion of musical boundaries, pushing out material with incredibly high quality control. Brave to the point of lunacy, she’s a genre on her own, irrespective of what the world does around her. See also: Imogen Heap, St. Vincent

Quite literally a legend, Carol Kaye was part of the Wrecking Crew, and has been on north of 10,000 recordings, playing for Brian Wilson, Phil Spector, Quincy Jones and Lalo Schifrin. And Ritchie Valens. And Glen Campbell. And the Righteous Brothers. And Frank Zappa. And Frank Sinatra, Stevie Wonder, Barbara Streisand, the Supremes, the Four Tops, the Monkees, Isaac Hayes, and more, as if more were needed. A bebop jazz guitarist first, she took to bass when another session player dropped out, thus fundamentally affecting musical history on a permanent basis. Oh, and she played on the original Batman theme, so there. See also: Mary Osborne

The Peej is no slouch, and aside from being bestowed an MBE for services to music in 2013, she’s thrashed out 13 records – including a retrospective Peel Session – and inspired many others. Harvey plays just about everything, from saxophone and guitar to zither, harmonica, vibraphone, violin, cello, piano and marimba. Entering the Guinness World Record books for winning the Mercury Music Prize twice (and being nominated twice since), she’s been nominated for 8 Brit Awards, charted endlessly, made her way onto the Rolling Stone Top 500 albums of all time list, been nominated for 7 Grammys, and received an Outstanding Contribution To Music award from the NME. She’s worked with Mark Lanegan, Thom Yorke and Nick Cave as well as getting heavily involved in the Desert Sessions, and is about to put out another record this year. Serious. See also: Patti Smith

The Burt Weedon of the Victorian era, the virtuosic lady known colloquially as Mrs. Sidney Pratten made her solo guitar live debut at the age of 9, before moving from her native Mulheim, Germany to London. She taught guitar in aristocratic circles, and, finding that many wished to learn the guitar in order to be more active socially, wrote a tuition book called Learning The Guitar Simplified by Mme. Sidney Pratten. By the time of her death in 1895, this book had been through 12 editions, and her collection of 19th century guitars – including a large number built to her specs by the likes of Boosey & Sons – was of some renown on its own. She also owned a ‘bambino’ guitar, which had a full-sized classical neck and a tiny body. See Also: Jennifer Batten

A murderously pained woman, Wynette was country personified. Born Virginia Pugh, she grew up with her grandparents in a house with no running water or indoor toilets, wed her first husband at 18 – she would marry a further 4 times –  had 26 major surgeries, and would come off an oxygen tank in her dressing room to demolish the stage with her staggering voice in the last years of her life. She also released 42 studio albums between 1967 and 1995, scored 5 number one hits during 1968 and 1969, and sold more than 30 million records. That puts her just outside the top 50 biggest selling artists ever, though it must also be noted that Madonna, that most enduring of female performers, is up at 300 million, which is quite a lot. See Also: Dolly Parton, Bonnie Raitt

Not even the seagull hovering above the tip of the iceberg, these are but a few scant examples in an endless tide of deeply worthy musicians who made a huge difference to the musical landscape we know today. There are countless others, so go out and discover if you haven’t already.