The Young And The Plucky 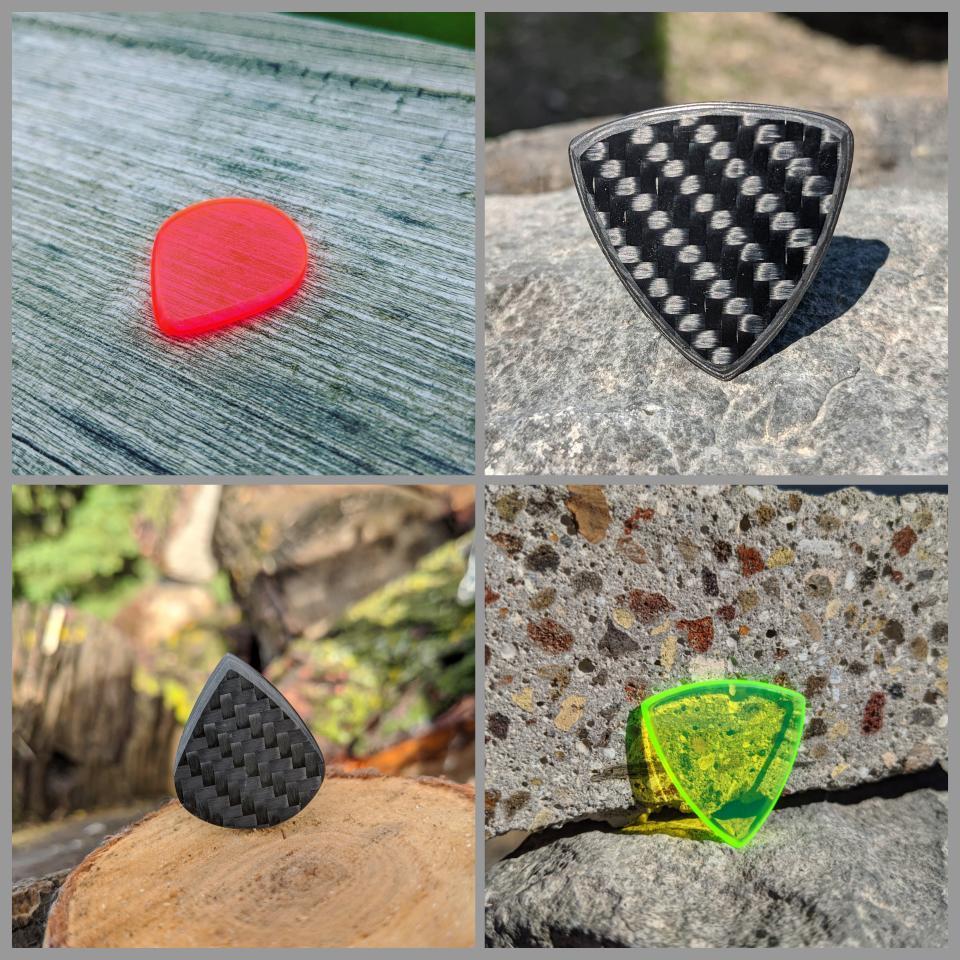 So often when musicians talk about picks, the assertion is that they’ve always been the same way, made by the same companies, and that although it’s definitely possible to look outside of Dunlop, D’Andrea, Pickboy etc, a lot of guitar players don’t. How different could a plectrum be?

Luckily, there’s a fertile crop of young makers coming up through the ranks. Some of them are already getting their plectrums in with the big names, or taking their works to makers long-established. Today, I’m going to run down a few of these exciting individuals, explain where they’re at, and how I’ve had the chance to watch them grow in real time.

Hendrix Plectrums
Hailing from the Netherlands, Rens Hendrix is a blacksmith whose work was one of the earliest examples I came across of proper hand-shaping and a firm approach to his own style of pick-making. Used to making knives, axes, swords and hammers, Rens’ deliberate, serious approach to his craft has resulted in some of the most incredible plectrums I own. From Acetate to Poisonwood, and from Mammoth Ivory to Ivoroid, Rens’ work is meticulous, definite, and possessed of a signature flair. He’s a big thrash fan and knows an awful lot about wood, something that I’ve found myself drawing on a fair old bit in the past. His plectrums favour sharper, more slender designs than most makers, and while this isn’t definitive, it’s indicative of his aggressive taste. With the Fork – a prototype Ivoroid/Cork amalgamation – he made one of my favourite plectrums of the year so far, so keep an eye on his activity at @rens.hendrix on Instagram.

New World Picks
Crafted by Bailey Erickson, New World is one of the makers I’ve been able to watch develop from day one. Although not the youngest person on this list, Bailey is still rather youthful, and is still shy of his 20th birthday. With an affinity for taking on all sorts of materials from wood to resin, New World’s approach has evolved from pointed and 351-shaped picks to much thicker models, often with broad, rounded tips. I’ve watched Bailey go at carbon fibre, acrylic, kirinite and all sorts – glow in the dark models, ridged edges, insane colours – it’s all here. He’s also taking a crack at guitar restoration, and for someone so young to be so heavily invested in the scene, and in pick culture, is a glorious thing to see. Follow him at @newworldguitarpicks.

Glitch
One of the most intriguing characters in the Plectroverse, Jacob Strauss is the youngest maker to date that I’ve come across in the scene. Jacob was popping up all over the pick community on Instagram before he started making, with his first fancy plectrum order taking place in December of 2019. Since then I’ve watched him go from using the Lichtenberg technique on guitar bodies to shaping his first pick in April of this year. The community has taken to young Jacob with some excitement, not least because of the fact that he livestreams most of his making, both showing his working and letting everyone watch him learn. Electing not to go the conventional route at all, the Mako is multi-tipped model with three pronounced striking areas and one that’s a bit more subtle. Because of his lunge into the deep end of design from the get-go, I’m keen to see what this resin-centric maker comes up with next. Follow him at @glitch_picks.

JmetalR
One of the OG Rep fans and no mistake, James Romanow is a top cat who has served the Plectroverse with unyielding devotion. When I first encountered James he was a pick collector just getting underway, starting to spread his collecting dollars across the many makers that inhabit our glorious environment. A fellow modern collector, he’s grabbed plectrums from Rombo, Honey, Dava, Dragon’s Heart, Velocity, Suibhne, Wingbeat and more, and recently sent his first creations out into the world. Starting with cow bone and diversifying into carbon fibre and acrylic, James’ focus is on the cruiserweight division (2-3.5mm), and while he draws on modern traditions with Jazz XL-derived carbon fibre work, his Razorblade Suitcase model harks back to the Bert Weedon/Ritchie Blackmore Homeplate shape of the early 20th century. Follow him with no small amount of anticipation at @jmetalr_plectrums.

All of these young makers are doing their own thing while drawing on the makers who went before. The plectrum is not finished being defined, and it’s going to be fascinating to see what happens with shapes, materials and approaches as time marches on. I’ll be writing an article on fresh makers who came up or flourished during 2020, so stick around for that, but in the meantime, go and follow these fabulous young creators – encourage their work and watch them grow!