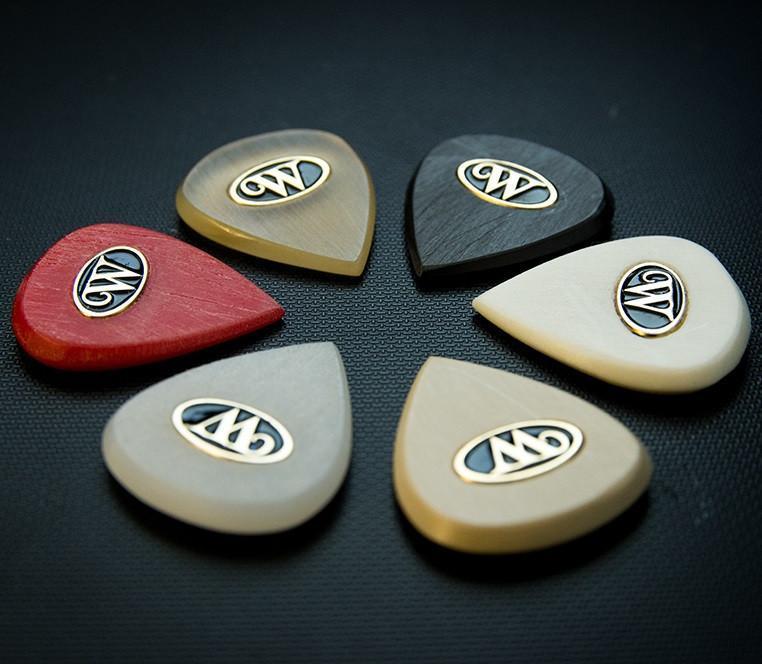 For players who fan their frets and like a preset or two, there’s few companies as beloved as Winspear Instrumental. Founded in 2013 by Tom Winspear, this English plectrier, cable and string maker has gone from lashing Dunlops together to being a main sponsor at Techfest, and with such a devoted following and handsome picks, it seemed insane not to have a chat with him. Here is that chat!

HR – Thanks for talking to Heavy Repping! For those who don’t know, how would you describe Winspear Instrumental?

TW – Thanks for having me! Winspear Instrumental Company is a small but rapidly expanding guitar accessory company I founded in the UK, mostly known for high end guitar plectrums (which was all I sold until just over a year ago).

HR – Winspear’s been running for a healthy period of time now – how did you get started? What sparked your interest in it?

TW – Indeed, coming up to 6 years! I’ve always been a bit of a gear nerd as a guitarist and enjoy design of all sorts – I’d recently checked out a handful of boutique picks and had my own ideas I wanted to try. I’ve always known I’d have to do my own thing in terms of work and this seemed like a pretty safe business to start up – it worked!

HR – You’ve made picks from Ultem, UHMWPE, PEEK, Ertalyte and U-Glass – which of these was the hardest material to work with? Why did you select these materials specifically?

TW – I just try to get my hands on anything with good wear characteristics. Even the softest materials take a bunch of handwork, which I’ve got to charge for – so I figure it makes more sense to add on some quality material cost and have it last 10x as long. From there I see how it works, feels, and sounds.

Ertalyte (PETP) is actually the cheapest material I use and perhaps the least special – but it can be a pain to work! You have to be careful sanding it as it likes to melt and the solidify real fast, so you can end up fighting against all this edge buildup getting in your way. It’s so a pain to keep white whilst working. Really need a separate room for that one ideally!

HR – A lot of plectriers make thicker plectrums, but what made you decide to go heavy?

TW – Honestly I just saw a picture of one once and put a load of tape round a Dunlop to mock it up. I liked how it felt so that’s when I bought my first 4mm pick – a VPick.

HR – Where did the inspiration come from to taper the entire plectrum, i.e. the Shiv/Longsword?

TW – I got hold of a Hufschmid eventually, and found the taper really comfortable but felt the slope at the back could be fleshed out for more grip. He said he wouldn’t customize them like that – that’s perhaps the single event that led to me making my own. The first design was the Battleaxe which was an even bigger triangle wedge, and is my largest pick to date.

HR – You’ve been quite active in the tech/death/prog metal scene – what was it like to be a stage sponsor for Techfest?

TW – For sure, I like a lot of music but those communities are where I’m active online so most of my customers are into that stuff. Techfest was awesome. It’s a really special festival and so nerdy. My good friend Chris of Carillion Guitars (get one!) was sponsor for a couple of years and I’d already been attending the festival religiously. He had to pull out and helped get me in last minute. It was great to get involved, see more of the festival and meet so many people. I should be back this year.

HR – Although Winspear is known for picks, you make a lot of cables and strings – what came first?

TW – I launched cables for Halloween 2017 and then strings around the same time 2018 so those are pretty new.

HR – How did your relationship with Fortin Amps come about?

TW – That was me taking a very deep dive back into analog rigs with a Meshuggah head and a bunch of their pedals – amazing gear. They had faith in me to cable up their NAMM booth – it was awesome to hear feedback and see pics of famous guitarists plugged in with them!

HR – One of your most famous models is the Fountainhead signature – how did that relationship start? Who else is playing Winspear?

TW – That was actually through some session bass for a good friend Paul Ozz. Fountainhead had a guest solo on the same track. That was my first real signature model and definitely stepped up the game in terms of ideas I’m comfortable working with. It’s definitely a best seller. Jason of Cytotoxin, Mendel of Aborted (though he just left the band today), Andy of Mors Principium Est, those are a few recent additions! Honestly I barely have time to keep the orders going out currently so networking and such is definitely a challenge currently.

HR – You’ve been quite open about the low-tuned, extended-scale tendencies of your products – what is it that’s so thrilling about such guttural tunings?

TW – When you say “of my products”, that’s more a product of my mostly metal orientated audience, but certainly the clarity and comfort of my picks are welcomed by metal players needing endurance and attack. I’ve got a huge interest in extended range and generally unusual guitars myself. There’s nothing quite like low tunings for a dark foreboding atmosphere – I love it for fleshing out solo jazz guitar too.

HR – What do you think it is that’s getting players so interested in the real details of their rigs?

TW – We’ve seen a really interesting movement over the last 10+ years, with the whole djent thing (is that word allowed here?). I’d been into metal for a long time and was already keen on home recording, but seeing so many artists with fresh sounds and foundations based in home recording was inspiring. People like Misha certainly popularised a more expensive taste, and also the lack of availability of non-custom extended range guitars back then – as well as the challenges involved with making them sound great – I think that’s all helped get more modern metal fans into gear. We’ve also got the whole YouTube/social media thing for which gear is good fuel – leading to conversations like this interview. So I guess new young guitarists are seeing and hearing about more high end gear early on. It’s been a really good push for brands to push their boundaries and keep up with the times. Very exciting. However, it’s important to stay grounded and keep in mind that average gear can definitely get 95% of the same results in the right hands, but nice things are fun and can certainly help.

HR – What’s next for Winspear Instrumental in 2019?

TW – My family moved across the country before Christmas and I’m in a professional facility for the first time with plenty of space to expand. Knowing how fast time goes by and how busy I am, honestly I don’t have anything planned this year aside from getting the business running more smoothly. A bit less winging it and being in a constant rush to fulfil orders. That’s my plan this year haha. To make room for an awesome 2020 and make the company an environment in which employees could work. Though I’m delving into the electronics front already so some new products may rear their heads this year with any luck.

HR – Thanks so much for talking to Heavy Repping! I really appreciate it.

TW – Thanks for having me and for checking out my work!