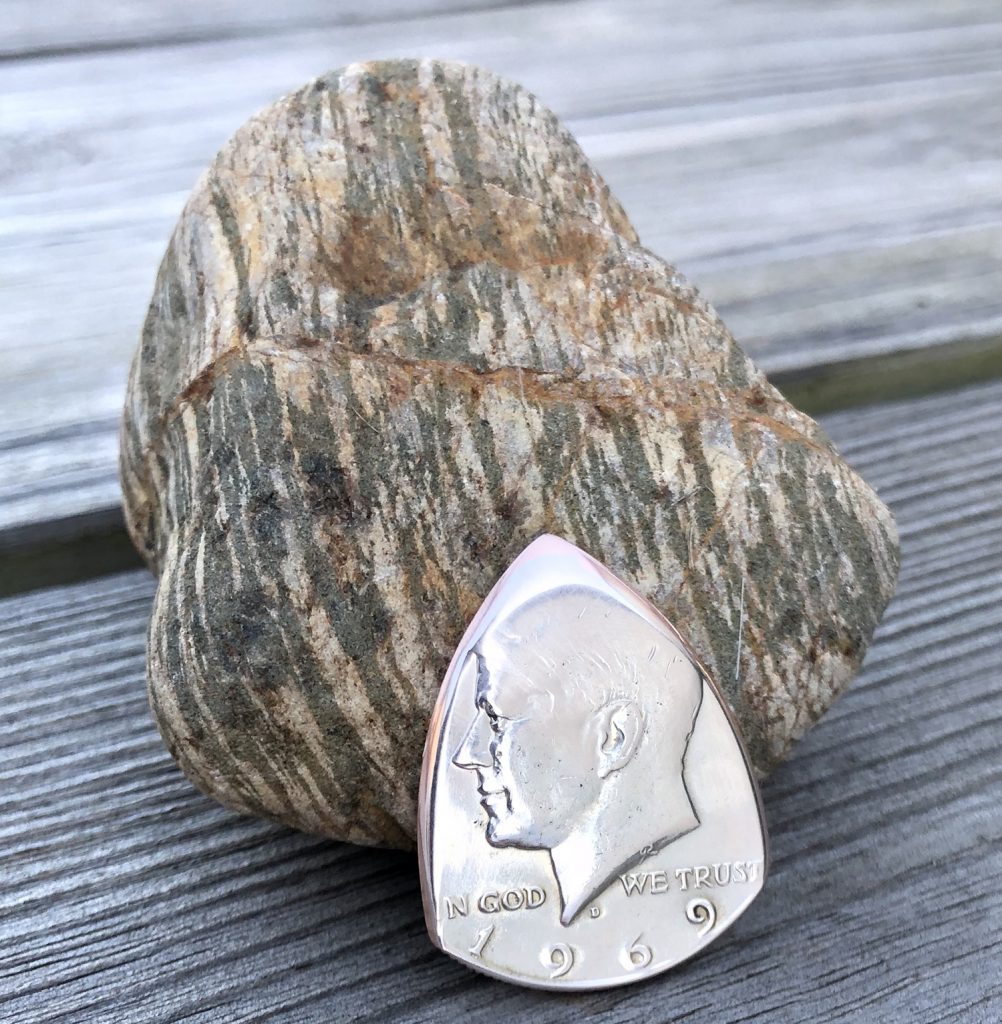 Here at Heavy Repping! I do my best to get close to the people that make the picks you love, whether they’re using Carbon Fibre, Ultex, or, in this case, legal tender. Yes, today I’m having a chat with Ruvane Kurland from The Original Coin Guitar Pick Company, a man with a true love for the globally sourced materials that he’s chosen for his plectrums. Money money money, must be plectrums – it’s a pick man’s world!

HR: Thanks for talking to Heavy Repping!. For those who haven’t come across your picks before, how would you explain The Original Coin Guitar Picks company?

RK: My pleasure! The Original Coin Guitar Picks is the world’s foremost company specializing in handmade coin guitar picks. I create every piece myself, and make picks for every genre and virtually every stringed instrument.

HR: So, first things first – of all the materials you could have gone for, why coins?

RK: Everyone has grabbed a coin in a pinch to play guitar. Without proper finishing technique however, the sound is clunky and imprecise-and potentially harmful to the instrument. Although the coin guitar pick concept is particularly old, it wasn’t until The Original Coin Guitar Picks entered the scene that the picks were actually playable. What The Original Coin Guitar Picks has done, is create a pick, or plectrum if you prefer, that is safer than plastic in most instances, has greater attack and sustain, and increases accuracy. I achieve this by beveling and perfectly mirroring the edges (along with some proprietary techniques) to reduce friction and string wear. This has truly taken the coin guitar pick concept to a new level.

HR: Compared to Delrin, Acrylic etc, how different is the process of shaping when it comes to a coin? What’s the by-hand/by-machine ratio? (this question at your discretion)

RK: There is nothing punched, pressed or mass produced about my process. The picks are each individually designed and shaped with my unique finishing process.

HR: Coins, as I understand it, differ in composition all over the world – what sort of difficulties present themselves when you’re working with such a varied set of materials?

RK: I actually view the various metals as a benefit as opposed to a difficulty. This is because each style of metal and composition has its own tonal nuances. I love working with nearly every metal. The only one I really don’t enjoy working with, which I’ll likely not do again, is grade 1 titanium. As the purest form of titanium, it is extremely difficult to work with. I made one just to prove it could be properly done, and sold it as a bass pick.

HR: TOCGP doesn’t just do coins – you’ve made picks from casino chips, fairground tokens, even Alcoholics Anonymous tokens. Was that your decision or something that came about from a request?

RK: I absolutely get a thrill from working with new materials. Some of the shapes and sizes were dictated by customer requests, but the materials for the most part have been my experimentation. As a professional touring musician, I get to tour the United States and visit various coin stores, antique shops, and other various locations to source my pieces. Some of my most memorable have been pieces that random people  hand me when they learn about what I do.

HR: Of the many, many picks you’ve made over the years, what’s been your three favourites?

RK: The Original Coin Guitar Picks was the first to offer a solid 24K gold, as well as a .995 solid platinum coin guitar pick. They turned out extremely well! One of my favorite picks to tour with is a 40% silver US half dollar. For my style of play, and for both acoustic and electric, it’s probably the best bang for buck pick that The Original Coin Guitar Picks offers.

HR: You’ve used a lot of old coins as well – how far back in history have you gone so far?

RK: I’ve made picks from back to around 200 CE. I’ve made ancient Roman pieces, Eastern Han dynasty, and countless other ancient, unique pieces.

RK: While The Original Coin Guitar Picks’ list of celebrity owners is extensive, and includes more than 50 prominent artists, I am probably even more proud of the thousands of working guitarists and those just beginning their journey, as it inspires them to play and better their technique.

HR: Tell the readers about the Bonfire Boost, and how that came to be.

RK: Bonfire Boost was an idea I had a few years back to be a versatile clean boost with variable gain setting. Although many clean boosts exist on the market, Bonfire Boost addressed the need to be really quiet in a studio environment, and particularly robust for touring. I needed a catch all type pedal and Bonfire Boost was born. It works great as an acoustic boost when playing with a band, and does equally well with clean electric, all the way through heavy stuff. I found that players around the world have gravitated toward Bonfire Boost for its build quality and versatility.

HR: What was the drive behind making your own coffee?

RK: I love GREAT espresso, and partnered with a local roaster to create a special blend for sale when I’m on tour. The finish of the sip is probably the most important part of the tasting experience for me, and I was quite dissatisfied with existing options.  Most were bitter and acidic. I wanted a full bodied coffee that performed equally well in an espresso machine as it did in a 4 minute french press. Ruvane’s Blend is a celebration of rock and roll, late nights and early mornings!

HR: What’s it like being a plectrier in this time period? Have you found players are more interested in picks now that boutique pedals/amps are more commonplace?

RK: Thankfully, players have been very receptive to our picks. The Original Coin Guitar Picks began prior to the boutique pedal “boom”, and our clients have really seen the value in creating better tone with a specialized handmade pick. They’ve realized the plectrum absolutely makes a difference!

HR: What exciting things have you got planned for 2019? Is there anything the readers should look out for?

RK: I’m always stewing on new ways to increase tone and playability. There are new shapes, coins, and  designs that we will release throughout the year. I’m currently in development of a new pedal or two. Also, I’ll be releasing my 9th album mid-year, so there’s a lot going on. Wouldn’t have it any other way!

HR: Thanks a million for talking to Heavy Repping!, it was a pleasure indeed!

RK: Thank you! Appreciate the support.