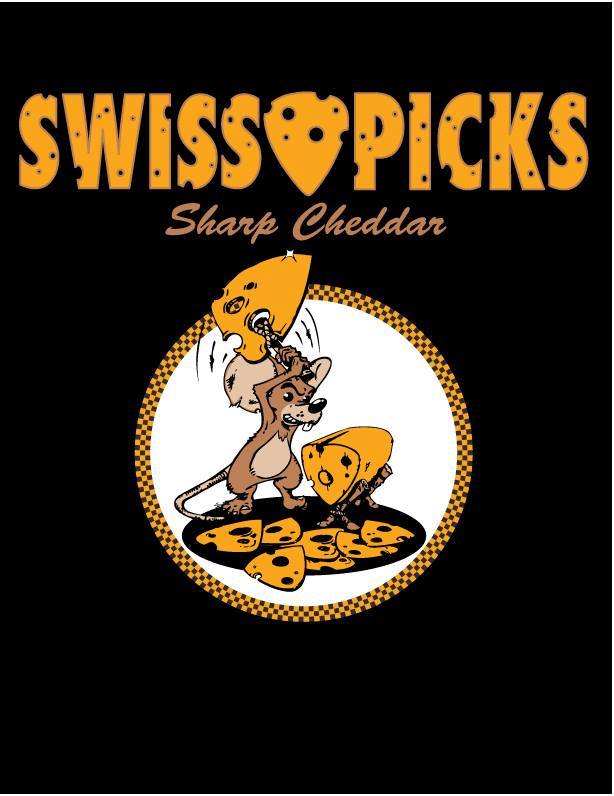 Even if you don’t know anything about the history of the company, you’ll no doubt have spotted Swiss Picks somewhere in print or online. Providing all-important tools for a speed-centric player base, the company has gone from strength to strength, supplying truly cost-effective plectrums to a growing roster of players with specific needs. I sat down with mighty mouse Pete Punckowski to talk cheese, chops, and the beauty of utility. Brie-d on!

HR – Thanks for talking to Heavy Repping! For those who are unaware, can you describe Swiss Picks?

PP –  Hi John! The official description is, “Off center holes and raised edges.”  The first appeal are their ‘locked in’ grip which being able to readjust the pick when going from rhythm playing to leads, and for the Sharp Tips, it’s “All the glide and none of the chirp while retaining the snap dynamics”.

HR – So, cheese. What made you go with this categorically distinctive design?

PP – To be honest, it first started as just a design idea and while I found it to be a very cool image, there was a point where I got the grip holes to elevate, and that’s where the utility was discovered. And while there have been others with holes in picks for grip, I realized that their placement of those holes were not in the right places for an actual grip. My holes are strategically placed.

HR – What was it that was lacking in picks that made you want to start making your own?  What was your background before getting into pick making?

PP –  I never thought that I would be where I am today with this. It just escalated. I was a guitar teacher and a competitive shredder for some 20+ years. My metronome was never far from me. Lol. In the decades of playing guitar, I had ideas on how a pick could be improved, yet, when you’re just a player, it seemed reasonable that there would be a pick company that would see the same issues, but that hadn’t happened. And I think you have to be a musician to improve a product for a musician, as we’re more in the know.

HR – As you’ve experimented with a number of materials – Delrin, Polycarbonate etc – which has been the most enjoyable to work with?

PP – An interesting question! My Rusty Cooley Polycarbonates are pretty straight forward, but the Sharp Cheddar and Atomic Delrin materials have been fun to work with different ‘secret sauce’ additives for longer lasting picks and improved tone. One thing that gets overlooked is a picks tone. The Jason Becker Blue Cheese picks are Acetal which most guitarists know as Tortex. That is the softest of the materials and in some ways, a more difficult material to modify. All the materials used for Swiss Picks are top shelf, with no corners being cut. And it shows in their tone and performance.

HR – How conscious was the decision to make Swiss Picks as affordable as possible? Was it a by-product of the process or something that you set out to do?

PP –  We’re in an age where it’s okay to have a pick that costs $5 to $50, but there also has to be a reasonable ceiling for the average guy out there. My prices are more affordable because I’m factory direct, which avoids the distribution middle man and the retail store mark up. I can imagine a player losing a $10 pick, shit, that has to hurt, right? LOL !! I’ll never sacrifice quality, but do my best to make these affordable. They’re injection molded as opposed to stamped, so the production costs are a bit higher.

HR – What made you decide to create the Jason Becker Bleu Cheese?

PP –  Jason Becker is one of my biggest heroes and musical influences, so when it came time to do an improved Tortex, the Becker Bleu Cheese seemed like a perfect concept. I was Facebook friends with one of Jason’s buddies, so he went to Jason’s family with the plans for it, and we made it happen. Before that though, I had to send samples of the picks to Jason’s family and some of his musician friends for a demonstration because Jason wasn’t up for having his name on anything that wasn’t an amazing piece of gear. So, that being said, the picks passed with flying colors, and the Becker Bleu Cheese became a reality. Jason’s family sells them on eBay exclusively and Jason gets a high percentage of those sales. As I’m honored to have Jason’s name on the product, it feels even better knowing that I get to help him as much as I can.

HR – You’ve been quite vocal about your love of one Mr. Cooley in the past – how did your relationship with Rusty come about? How much input did he have into the design of the Nuclear Cheddar?

PP –  It was 2014, and I had just made the Sharp Cheddar series which was a year of making in design. The Sharp tip was where I got to change the game. Like many, I was a Dunlop Jazz III user, so when I created my Sharps, they had to be a game changer. Like the other 4,999 people, I was Facebook friends with Rusty and asked him if he’d like to check ‘em out. He was using Dunlop and open to it, and 4 days later he called me and said, “These are the greatest f*cking picks I’ve ever played in my life! If you’re in, I’m in!’  I’ll never forget that day, as Rusty is another hero of mine. So, a few months after Rusty was onboard and loved the pick, he felt the tone was a little muddy on the low end of the 7 and 8 string guitars. So, I went to the Polycarbonates, which are bright in tone, and Rusty was a happy camper. Hence the Nuclear Cheddar was born, the color modeled after his green Dean RC-7.

HR – Who else is playing Swiss? Have you found that you attract a certain type of player?

PP – I have some GREAT players and too many to list. They’re mostly technical players. Shred, Metal, Djent, Some of the newer guys like Sims Cashion, James Norbert Ivanyi, Patrick Somoulay (Reflections), Ronny Gutierrez (Soilwork, Kobra and The Lotus), Andrew Kingsley (Unleash The Archers), Jack Kosto (Seven Spires),  Brian James (ex-Fallujah) & Ando San Washington (Ando San) are all incredible and that’s just scraping the surface. What’s really been AMAZING are the veterans of Shred that have left their Dunlop picks of 25+ years behind and moved over to Swiss Picks. Guys like Rob Johnson (solo & Magnitude9), Scott Mishoe, Shrapnel record artists Brett Stine (Haji’s Kitchen), Scott Stine (Solo) and Derek Taylor, and of course Rusty Cooley. It’s been mind-blowing for me and a confirmation of the product.

HR – What’s it like being a plectrier now from when you started?

PP –  Y’know, I’m not sure. LOL. I just do what I do and while there’s all sorts of cool looking picks coming out, there HAS TO BE the utility. Personally, I don’t go for all the big thick plectrums that are like 10.0mm, so I’m a bit out of touch with that crowd. And there’s a lot of different materials like stone and wood being used as well as Ivory, but I see it as more a novelty as opposed to a full time performance product. I will say, for the last 4 years, it’s great to be recognized as one of the top independent pick companies out there.

HR – What do you think has changed in the musical landscape that players are starting to look to smaller firms and bespoke builders for their equipment?

PP –  Most of the time the bigger companies are a bit out of touch with a player’s needs. I think that in the pick world, most play what they found at their ‘big box’ stores and settle for inferiority, but the players who really care about their craft seek out the cutting edge of any musical product. I think we all have to be open to improvements in gear if we’re going to take our craft to the next levels… and the smaller companies are willing to go there.

HR – In the history of the company, what’s been the most rewarding moment?

PP –  It has to be the phone call for Rusty Cooley. When one of your biggest influences says it’s the greatest pick they’ve ever played, y’know, what could top that. The second most rewarding moment was NAMM weekend in 2017 where I got to meet Rusty and hang with him for the weekend. He’s an awesome guy and we all had a BLAST !! I’m still recovering. Haha!

HR – What’s next for Swiss Picks?

HR – Thanks for the interview – both I and my readers appreciate it! Keep carving the good stuff.

PP –  And thank you, John! I appreciate your interest and dedication to these Shred Weapons! And a BIG shout out to my fellow plectrum builders and inventors out there.