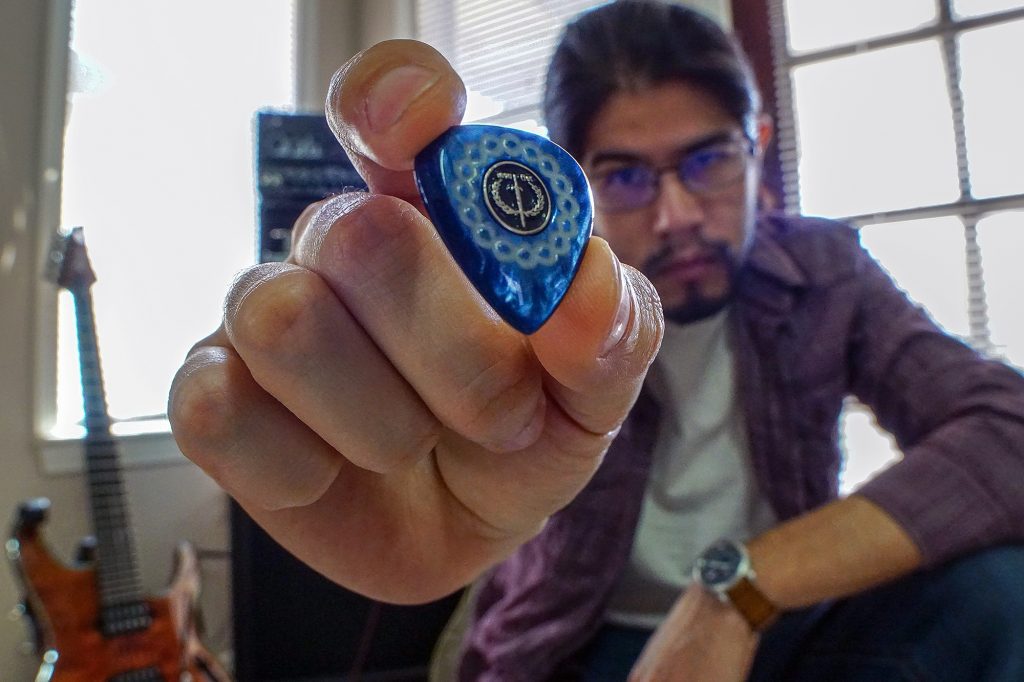 The most purposeful, determined-feeling plectrums I’ve come across so far, Iron Age Accessories are not to be messed with. Cut from all kinds of materials and heavily inspired by ancient warfare, they’re tools for the committed musician to make their mark with. Heavy Repping! tooled up and sat down with founder Alexis Radeo to talk Norse mythology, kill switches, technical metal and personal battles in a frank and welcome interview.

HR – Thanks for talking to Heavy Repping! For the unaware, how would you describe Iron Age Accessories?

AR – Hi John, happy to share a bit of insight into the brand. I think the word that comes to mind instantly is “unconventional”, and I’ve heard this as both a good & bad thing – So definitely not for everyone. The products themselves are of course guitar picks, knobs, & even kill-switches. It’s all done with the underlying theme of the “Iron Age” era in time, whether that be about the Roman legions, its imperials, or even Norse mythologies.

To take it further, the archetype of the “Warrior” also plays a part in the overall vibe of the brand. I think that is something timeless & universal across all cultures. A “Warrior” might mean something different to different people, like having courage, discipline, endurance, or just willingness to fight etc. But it’s the thing that ties things up & that nearly everyone can relate to, regardless if you’re an actual solider. We are all fighting out our personal battles on the daily.

HR – What was your background before starting the business?

AR – My background is in electronics & “turning wrenches”. I served as an avionics technician (for harrier jump-jets) in the Marine Corps in my earlier years. This mostly consisted of troubleshooting problems across the various systems (radar, weapons systems, fuel, engines…), like if the component had wires attached, I got to work on it. It was all very hands-on & challenging at times but seeing these machines take to the air was a rewarding experience in itself.

HR – What do your former colleagues think of your new line of work?

AR – Well I don’t physically talk to them much anymore. After the squadron life, everyone just kind of parts ways. Like some people lived on the west coast, I went back to Texas, & others towards New York. There have been a couple who have stopped by the website & made purchases, so there’s that, but I think for the most part it might seem a bit strange from outside. After all, who sets out to make a living doing what I do? Perhaps a more suitable occupation would have been working for Boeing or a commercial Airliner!

HR – What is it about Roman and Norse history and mythology that inspires you?

AR – I think this goes back to the whole “Warrior” thing; it’s present everywhere, especially in myths & the stories we tell (including so many movies). You know, it’s about the legendary feats & heroic journeys. It’s all so extraordinary & I find that helps to inject some inspiration into the daily grind.

HR – What came first – the kill switch or the pick?

AR –  The kill-switch was first & is the longest standing product.

HR – A lot of boutique builders favour thicker designs – what picks were you using before you founded Iron Age? What was missing from conventional plectrums?

AR – Definitely a big fan of the Dunlop Jazz IIIs & Jazztone 208s. There was nothing “wrong” with traditional picks, but I felt they could be re-imagined & brought to life – like personalized & infused with a certain character.

HR – Choosing from your current range, which 3 picks paint the most complete picture of Iron Age’s ethos?

AR – First & foremost is none other than the “Spearhead” (in any of its 3 models), the ever-resilient Centurion (Legio Ferrata “Ironclad Legion” Series), & the distinguished Imperator (Imperial Series).

HR – Your Instagram (@iron_age_guitar) shows a lot of new materials coming into the workshop, and you’ve been known to use a lot of different mediums. What’s been the most exciting one to work with so far?

AR – Currently I’ve been experimenting with various types of resins. Many of them are hand-made by other artisans who are dedicated to their craft, & so they are one-of-a-kind materials. I’m also developing some techniques of my own in order to make use of softer materials which might not of been suitable for making picks initially.

AR – Yes, the collaborations with Charles have been very successful. He’s been a supporter of the brand even before I realized who he was exactly. After he made a kill-switch installation video, it really caught my attention & then sought him out. I think it was a natural match since he liked the gear, but most importantly, he was also a 1-man show & managing to get ahead.

I’ve also met up with Dave Dunsire at a show in Austin & we talked about making a signature pick. That was the 1st signature pick ever & that launch went well too. I think he might be releasing an album this year so we might do something for that as well. Other than that, I haven’t gone looking for high profile artists to fill a roster. It’s definitely the norm in this industry but I believe results can also be achieved in other ways.

Regardless, I’ll be working on a small endorsement program this year, even if it’s only for a select few.

HR – You’ve been going since 2015 – What’s been the most rewarding moment in the company’s history?

AR –  Well, the most rewarding moment(s), have been receiving genuine glowing reviews from happy customers. There’s not really a roadmap for this type of business, like say knife-making. If you’re making knives, there’s forums & communities where you can go to learn techniques & business processes related to that industry. So when the ground got shaky for me, it was the steady stream of feedback that kept me going.

HR – What do you think has changed in the modern landscape that players are taking more of an interest in the details of their setups, picks included?

AR – I think it’s a big shift across many industries, more & more people are moving away from mass produced “one-size-fits-all” items it seems. Perhaps it’s because they want a more personalized service or something bespoke just for them, and sometimes it might even be about sustainability.

Also nowadays, it’s easier than ever to start a brand, so there’s more businesses in more niches. The options available are becoming very specific to certain groups of people.

AR – Well, there’s a new pick series in the works & I think that will be a major addition to the lineup.

You can expect various limited edition items & one-off throughout the year as well. There will also be some more collabs with Charles of Berried Alive, and as mentioned, I will also be working on setting up a proper endorsement program.

HR – Thanks for talking to Heavy Repping! I sincerely appreciate it.

AR – Thank you for creating a place to showcase this sprouting craft. Really appreciate the exposure, thanks again John.