The Little King – Cult Of The Jazz III 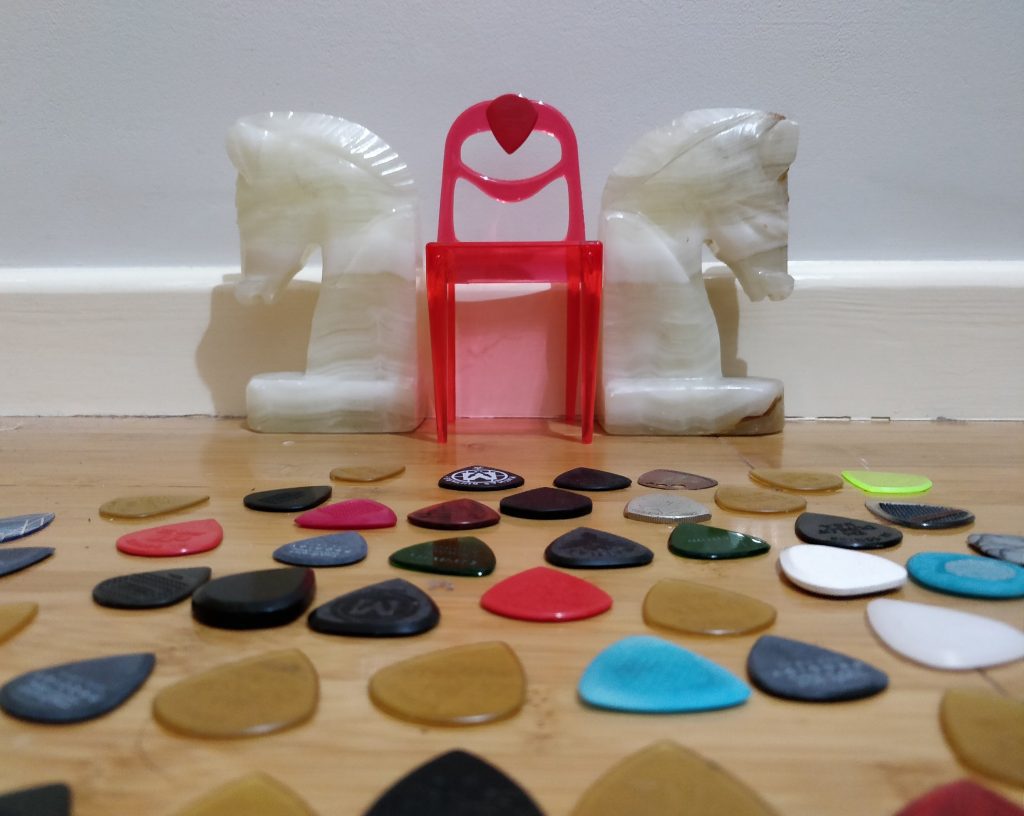 The guitar universe has a penchant for devoting itself to improving things. A case in point is the Ibanez Tubescreamer, or the ludicrously revered Klon Centaur. Both these pedals have legend attached to them – the Klon is exalted by some players like the ark of the covenant – and builders worldwide have reverse-engineered them, revised and rebuilt them, modded and straight-up copied them, chasing a sound that’s so much more than the contents of the pedal itself.

In the pick game, these examples of slavish devotion are less common, but the one that gets the real revision treatment is the Jazz III. Joe Bonamassa has a signature one, and states with total conviction (in this video) that he can’t use anything else. John Petrucci has had so many signature Jazz III’s that it’s almost as silly as his band, and while players’ tastes in guitars and pedals fluctuate depending on the wind, those who have crossed over into the land of the Little King often don’t want to come back. To this end, Heavy Repping! decided to look into this, and figure why it’s such a draw.

Made from rigid Nylon, the original Jazz I clocks in at 1.10mm, and has a rounded tip. Coming from the 1.38mm III, both the I and the slightly-less-rounded 1.18mm II are a weird experience. There’s a slacker feel to it, and less definition. Hardly surprising given the nature of the tip, and the extra mass does help to push your notes through. It’s interesting to note that the grip doesn’t change that much, and if you’re used to the tiny size they all feel more or less the same. So far, ace.

The grip is something else though. You’d think that such a small plectrum would be useless for strumming or chord work, but no. The bevels and sharp tip glide through the strings with ease, and this means that less physical effort is required. If you’re wondering why these things end up in the hands of so many metal players, now you know.

Tonally, the stiffness of the Jazz combined with the relatively relaxed, bright-ish sound of Nylon means that your notes stand out. Dunlop thoughtfully make a lot of these, so there’s one to suit your precise needs – more on this in a minute – but the one you’re probably turning round in your fingers (or biting) is a brilliant all-rounder. Robust and precise on both acoustic and electric, it might not have the extra top or bottom end delivered by its boutique counterparts, but for a mass-produced pick it’s very good.

It’s interesting that boutique companies do roughly equal variants on the III and the XL – the big lad has more power and greater scope for strumming, but doesn’t move as swiftly as its wee pal. The variations I’ve encountered naturally use different materials – steel, carbon fibre, Delrin etc – and so the tone can have more highs or bigger bass, more flex or greater physical thickness. They also tend not to mess too much with the dimensions, though a lot of makers do give this diminutive tool bigger shoulders as a way of increasing the surface area without throwing the extremely well-judged weight distribution off.

This pick is fast, partly because there’s not a lot of it, and partly because of those excellent bevels. There are, as previously stated, many alternatives even within Dunlop on this classic – Max Grip, Ultex, Kirk Hammett, John Petrucci, Joe Bonamassa, Pitch Black, Stiffo, the entire Tortex series, Flex, Primetone, Tosin Abasi, Carbon Fibre etc – so if you fancy one, you can have whatever you like, thick or thin.

There’s a special, different feeling in using a pick this small. It forces your hand into the right position, and unless you’re playing heavier gauges, the rigidity and strike is plenty to do everything you need to. The appeal to lead players is very strong because of the articulation, and the minimal drag means you get right up into it. There’s better picks for strictly rhythm work, but if you like to make faces and bend, grab a couple of these from your local shop and see how you go.