THE GUITAR PICK- A DEEPER FOCUS by Chuck Kirby 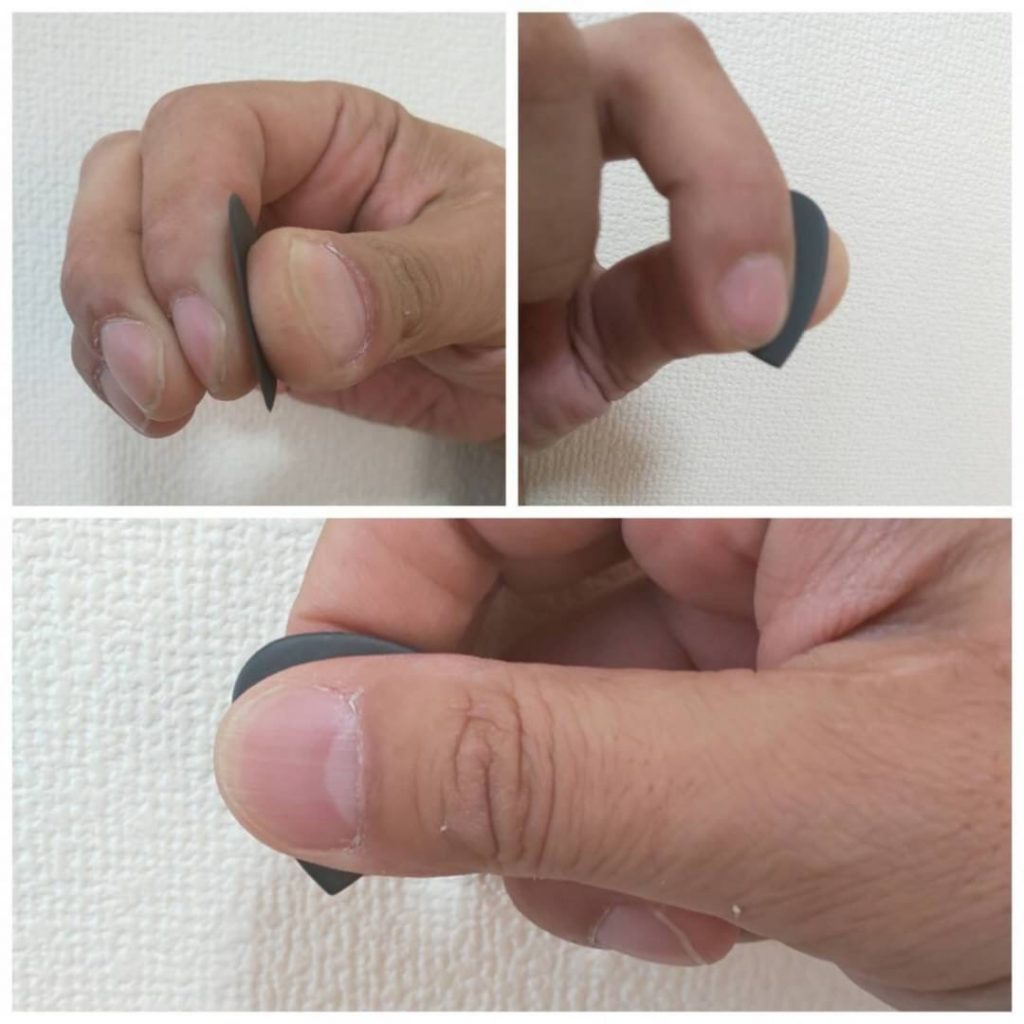 Dedicated pick collector and keen admirer of Japanese guitarists, Chuck Kirby submitted this piece following a discussion with YouTube guitarist Norizo. Much and many thanks to Chuck for his submission – read all about it below!
– JTD

A vital component of any guitar player’s arsenal of gear is probably the smallest, which is the type of pick (or some prefer plectrum) that one uses.    Guitar picks made of various materials have been around for many years, but the modern guitar pick that most players are familiar with originated with the D’Andrea company in 1922 with their celluloid picks.

Since that time, there have been a plethora of new and different guitar picks that have come into common use throughout the world, with D’Andrea still being a dominant force among pick makers.   They even have the statement, “The One Pick that Started it All” emblazoned across the top of their homepage.

Others followed and have become household names like Ernie Ball, Jim Dunlop, Dean Markley, Herco, Guild, Martin, and to a lesser extent, brands like Clayton, In TuneGP, D’Angelico, and others.    And probably the largest outside of the United States is Japan’s Pickboy, whose parent company is Nakano and was founded in 1967. Two of the biggest names however, being Fender and Gibson, have had their picks made by D’Andrea for many years as have other major brands of musical equipment.

Just as manufacturers of picks have exploded over the years, so have the advancements in materials and colors of picks, along with the printing techniques on picks that now incorporate actual high resolution photos of the artist if requested.   There is now a massive array of shapes of picks, gauges, and even exotic materials such as bone, ivory, stone, wood, and real tortoise shell still legally made in Japan from the shell of the hawksbill turtle.  This is only a small list of materials that are being used to fashion guitar picks as more and more advancements are made to create new and more efficient picks to fit the needs of any guitar player, so he, or she,  now has more options than ever for their choice of a pick to use.   This brings forth numerous factors that determine how each player can achieve their own unique style of playing in which their pick can sometimes play as much of a role as strings, and even their effects do.

As they say though, “It’s all in the hands”, but the correct pick in the right (or left) hand can sometimes make a difference that can be quite obvious.  As a guitar player and a collector of guitar picks for a number of decades, I have tried dozens of picks in order to find the ultimate pick that works best for me and I’ve always been curious about the process that other players go through to arrive at their ultimate pick, (and in some cases, the search is ongoing).   I think now is the time to really explore this topic and begin my quest in earnest by reaching out to the guitar community and conducting some in depth probing into what each player is looking for in order to create their own unique sound and style with their choice of pick, or picks.

Interview
CK: At what point in your guitar playing career did you really start to focus on what type of pick you were using, and what were you looking for in a pick that would really help you to create your style as you wanted it to be?
N: I started playing the guitar when I was 14 years old.
In the process of improving my playing ability, I used picks of various
thickness, length and hardness when trying out several music genres.

CK: Tell me about the gauge of the pick that you prefer and if you prefer a certain shape.
N: I use a teardrop type hard pick with a little shorter length.

CK: Do you have a preferred brand of pick?
N: I’m not particular about the pick brand, but I have been using
PICKBOY’s high modulus GP-33R/100 for over 25 years.

CK: Is there a preferred material that your favorite pick should be made of?
N: I like carbon nylon for the above reasons.

CK: Please describe how you grip the pick and if you have more than one method of grip and how you change the grip to use different techniques if that’s part of your repertoire.
N: The angle of the finger is an orthodox forward angle.
I hold the tip of the pick so that it only comes out about 1 mm.
This is because picking harmonics are used for chord tone and solo tone at any time.

And, when doing the cutting play, rotate the pick 90 degrees.
At that time, I do not use the tip of the pick, but pick at the rounded
pick edge.

CK: Some players incorporate finger style picking techniques while concealing the pick in their palm or fingers and then bring it back into use during a song. Do you use the pick to create special effects such as scraping the strings, or using the edge for tapping techniques, or other unique effects that you like to incorporate?
N: I don’t use pick scratches toward the guitar head side.
And I don’t perform tapping technique using pick edge.

However, I am good at using scratches near the pickup as sound effects.

For example, right before you use your finger to grease down the strings with your left hand, very fast at the pick edge between the 1st and 6th strings, producing scratch noise and then grease down. Also, scratch the strings in a circle, I can intentionally produce noise with a range of pitch.

CK: Some players change strings after every gig, or quite often.  Do you put a lot of wear on a pick before switching to a new one, or do you reach for a new one after just a short period of use?
N: As for the song I play, the tip of the pick wears out very quickly, so
I will change to a new pick after playing a few songs.

CK: Do you only use one type of pick regardless of what type of guitar, or song that you may be playing?   If you use other types of picks, please describe them as well.
N: I use it properly according to the guitar that plays the pick. I use the triangle pick when playing acoustic and bass guitars. I use a teardrop pick when playing an electric guitar.

CK: Are you, or have you been working with a particular pick maker to make a pick that meets your personal needs and specifications, or do you simply buy off the shelf in the gauge, shape, and brand that you prefer?
N: I am using a commercially available product from a manufacturer that I like.

CK: If you order custom picks from a pick maker, do you have special printing applied to your pick such as your name or signature and the band logo if you’re in a band?
N: I think I’ll print my name on the pick.

CK: Many artists are known to have custom printed picks made with their names, band names or logos, and even photos printed on the picks.  If you have that done, do you also use those same picks to play with, or do you use those primarily for promotion and to give to fans?
N: Yes.

CK: How much importance do you place upon your selection of the pick that you use on creating your style and sound and if it’s as important to you as your choice of strings, and other gear?
N: I think picks are just as important as strings, as they directly
affect their playability.

CK: Do you have any other opinions or thoughts on your picks, or anything else guitar pick related?
N: I don’t know the feeling when playing a pick until I try it out, so I
want a system that allows me to actively try out the pick at an
instrument store.