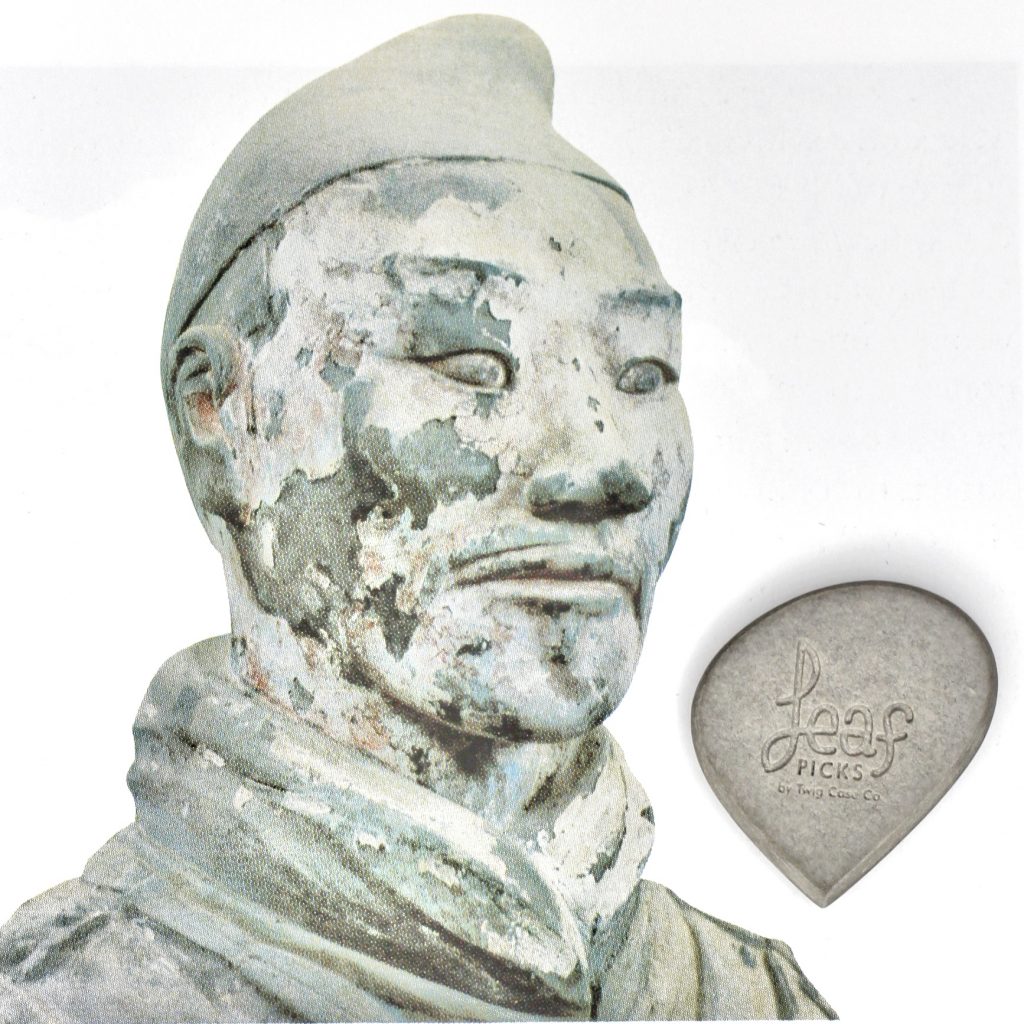 The guitar industry is full of people who beaver away behind the scenes, seldom leaping into the limelight. They are the inventors, the technicians, the innovators – the ones who make things work. Recently, one such individual reached out to the Rep about their picks, so we’re going to talk about them. With our eco hat on, let’s take a long hard look at the Twig Case Co. Leaf and Ghost Leaf.

Specs
Though both picks measure 27.85mm across by 30.05mm long, the Ghost clocks in at 2.4mm thick, and the Leaf at 2.20mm. Presented in a striking offset shape, Twig Case Co. say they’re inspired by the Jazz III, though parallels can also be drawn to the Xufoy GO and, in a more historical context, the old D’Andrea 347. The Leaf logo and the legend by Twig Case Co. is perfectly cut into both sides of both picks. Despite the crispness of the debossing, neither one felt intrusive. Both the darker Leaf and the spectral-grey Ghost being crafted from compressed layers of paper.

Feel
There’s a shapely, buoyant appearance to both Leaves that lends them a very organic quality, despite the high level of finishing on display. Given Twig Case founder Jon Lucca’s design background this shouldn’t be surprising. Nevertheless, bridging such a divide is no small task, and to be commended.

The Leaf is lightly textured, possessing the smoothness that Richlite is known for. A more present texture appears on the Ghost, reminiscent of construction paper or parchment. On the examples I received the Leaf was bevelled gently compared to the more sharply-contoured Ghost. Both picks are lighter in weight than even their Dunlop 1.5mm Delrin 500 counterpart, which was a pleasant surprise.

In Operation
Being a fan of Richlite, the Leaf felt immediately like home. As this material is used by makers like WooDo and Dragon in significantly thicker settings, it’s eye-opening to experience it below the 3mm mark. String noise is minimal and the grip is firm, which is a big plus. On acoustic especially, the warm breadth of sound is to be commended, carrying as it does a measured, sincere aspect. By contrast, the Ghost has a less immediate hold, while producing more bass and accentuated treble. It’s less serious – wry, rather than explicitly joyful.

The Leaf pushes the player to slow down and enjoy the graceful bloom of notes it’s producing. There’s a softness to the attack, and compared to the 2mm Delrin 500 Series from Dunlop, there’s more bass and less muffled top end. The scrape so common in stone picks is tacitly present, though without the immediate power for which the likes of agate are known. Our spooky friend kicks out a heftier sound than its sibling, and by far the more striking of the two.

Conclusion
Make no mistake – if you’re anywhere near this site, checking these out is imperative. While the Richlite variant generally behaved as expected, the Ghost Leaf is an unassuming powerhouse. At $20 it’s not the cheapest thing out there, but if you’re looking for one of the most devastating acoustic or mandolin picks in existence, this should be on your shopping list. Hard-hitting, sleek, and imbued with a definite feeling of significance, it’s a piece that the discerning plectronaut must encounter. Wonderful!