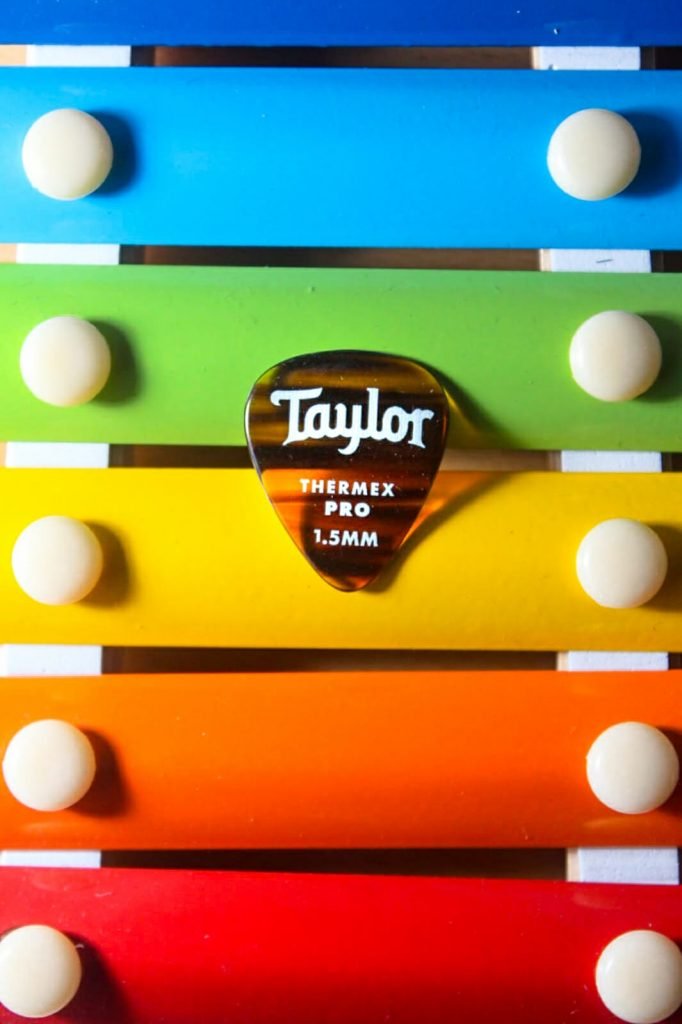 Maybe you have to know the darkness before you can appreciate the light.

Since it was possible to do so, guitar companies have had their logos on picks. Even back in the earliest days of the impressed era, distributors and brands have had people knocking out picks for them. In the modern day though, that’s not enough. Taylor have seen fit to release their own picks – the Darktone Series – and it’s from this crop of items that we’re going to take a stiff old look at the 351 Thermex Pro 1.5mm.

Professional
Measuring 25.2mm across by 29.7mm long, the Thermex Pro is around 1mm shorter both ways than our reference 351 Tortex. The neat doming along the edges is closer to the 500 Series, with a truly quality feel throughout. Having played a lot of variants of this range, I would also add that the Pro looks more sophisticated than the Abalone or the Onyx. This may seem inconsequential, but don’t forget that the colours shown in each pick type are generated from the material itself, and each one of these materials has its own characteristics.

Straight Lines
In my experience, Thermex has been deeply consistent. The very first of these picks I received, the Ultra Abalone, had some very unusual inconsistencies in the finishing, including a couple that were half the thickness shown in the print. The Pros, however, have an air of defiance about them, which initially I found a bit odd, but the more I played with them the more I understood it.

Firm
You see, these aren’t toppy, jingly-jangly picks. Taylor themselves state quite firmly that the whole point is to reduce twang and convey a warmer, richer response. The density of the material – a proprietary thermoplastic (pick code for ‘we’re not telling’) – is very high, and a drop test demonstrates a very dark, unfussed nature. Combined with a tip that’s as rounded as a conventional 351 but on a smaller body, I was expecting some sombre slink.

Lurker At The Threshold
Boy oh boy is this a shadowy Steven. Compared to the similarly-appointed Delrin 500 Series 1.5mm, the Pro is deliberately grim. Playing minor chords with both picks reminded me of Westworld; the 500 is the tourists’ Wild West, all yes-ma’ams and Stetsons – the Pro is the first time a wounded patron peers through the gunsmoke of a looming robot. If you’re really into darkened tones, this is a must. I’d say that this is the least trebly, most bass-heavy model in an already brooding series, and the curled, evil smirk of it is like nothing else in my collection.

Draw
This isn’t a pick for playing quickly – though the careful beveling and neatened shape make that fairly straightforward. It’s the anti-hero, the sinful, troubled duster with few cares and nothing to prove. Acoustically, there’s very little top, and the push in the low mids is huge. On electric, if you don’t pair this with tremolo and a tuned-down, Bigsby-equipped hollowbody, you’re missing out on one of the most likeable villains of our time. The Thermex Pro is one for the permanent toolbox – when you’re done jangling about the summer and want to spin a story of madness in the twilight hours, this is a must. Smoking.