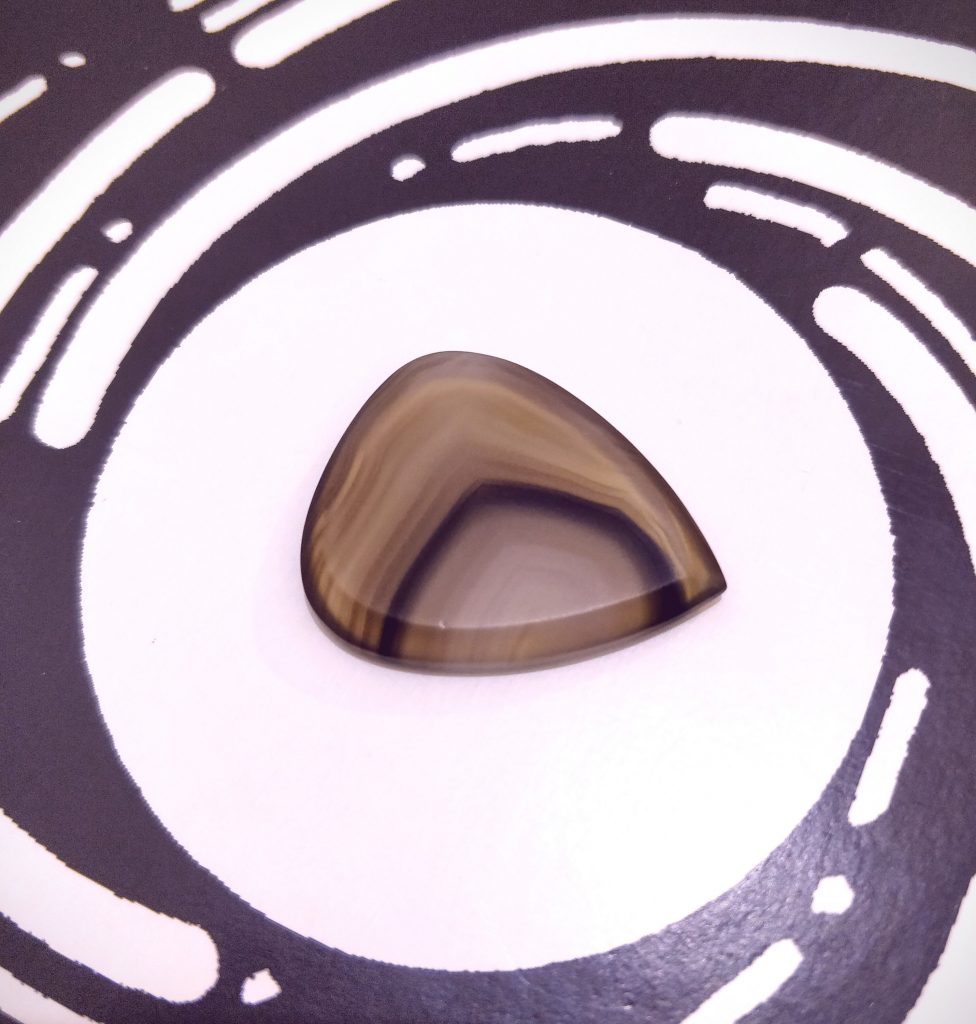 I’m going to take a punt here and operate on the premise that only the smallest numbers of you have considered using a pick made of stone. ‘That’s far too hard’, you cry – ‘are you insane’?

Madness not withstanding, why not use stone? After all, we’re not talking about plating with a Mayan spearhead, but a beautifully polished, carefully selected piece, deftly tumbled and finished by hand. Heavy Repping! has already seen it’s share of steel, carbon fibre, glass-infused thermoplastic and palm tree nut, so nature’s most abundant solid is a natural progression.

This fine example of ancient technology is a plectrum I have named Old Grey, supplied by Matthew Halliday at Stone Age Guitar Picks. I’ve had a few picks off him, and each one has been perfectly finished, well packaged, and capable of delivering a phenomenal, unique sound. The Agate used here genuinely doesn’t sound like anything else, and everything from the weight to the initial contact on the string is completely different to what you’d expect from any material you’ve tried before.

Closely resembling a 351 but with a sharper tip, Old Grey is, first and foremost, a looker. She’s got a knowing feel, and gives plenty of indication that she’s seen a few things. Yes, Old Grey is a lady – not for her the brash, muscular aggression of ultra-macho Ultex, but an airy, refined rasp with fantastic top end. On acoustic, this potent pebble plunges deep into the bass realm and breathes out treble like an icy winter wind – the electric experience is much the same, but with even more power, and incredible clarity.

Not being my first stone rodeo, I was expecting certain tonal behaviours, but to quote Marti De Bergi, I got more – a lot more. Single notes were galvanised by grace, and chords were cleaner, more even, and intelligently controlled. The biggest surprise was on the bass end of things, as my flatwounds took their new striking companion with immediate urgency. I was soon attempting all sorts of strident activity, and delving into my trick bag for massively melodic passages that suddenly had more air and majesty in them than before.

The grip is excellent, and given the non-porous nature of the material, my hands continued to hold the pick without even thinking about dropping it. Granted, it takes a bit of time to get used to wielding 3mm of bevelled stone, but no more than a few minutes of playing. I wouldn’t say that this particular size and material would be great for jazz – it’s far too shimmery and snowy for that – but if you want to hear exactly what you’re doing, get your tone from the stone! Boss.