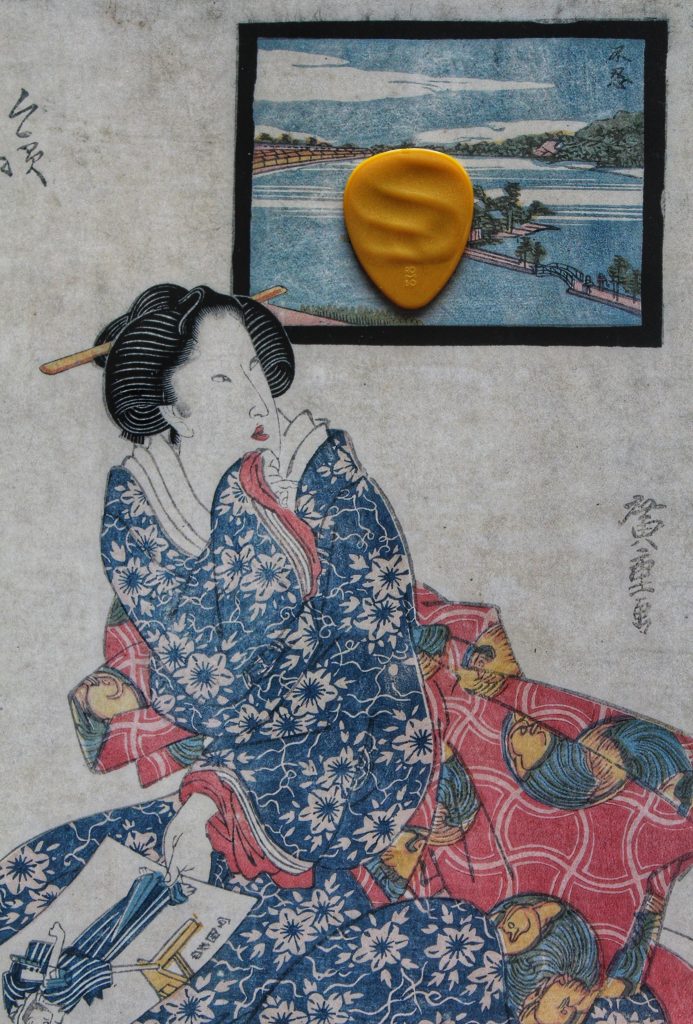 It’s no secret that I find this to be an extremely exciting time for the Plectroverse. Not only is it gaining steam and notoriety for its importance in the sound of millions of players, companies like Rombo are approaching this centuries-old device with new outlooks, shapes and materials. Aside from being one of the companies I’ve contributed to for a Kickstarter, they were also one of my earliest interviewees, and getting to witness their exemplary marketing and exciting, extremely well-thought-out campaign has been an intriguing part of HR!’s journey.

Today I thought I’d take a closer look at their Yellow Wave, whose closest physical relative would be the Dunlop Stubby. However, unlike Jim’s hardy sort, the Wave is made from ‘a thermoplastic polymer that’s part of the polyamide family’. If you didn’t know this and just held one, your first thoughts would likely turn to Nylon, but this material is much more resilient, and to my hands, more grippy. At 27.2mm long and 22.1mm wide, the Wave is the same length as a Jazz XL, but much narrower. The polished tip clocks in at 1.2mm, and the risen, undulating grip surface peaks in thickness at 1.9mm. Rombo have elected to make these picks using injection molding, implementing drip runners instead of gates, which makes for a much neater finish.

There’s an air of purpose to it, which is not surprising – Rombo designed their picks for specific applications, so rather than having a single shape and varying its thickness, they’ve got a uke-friendly one, an all-purpose Dunlop Yellow equivalent, a more aggressive, thicker design for predominantly single note application, and this, which is for strumming. But John, you scream, surely all picks are designed for strumming? Well, my young friend, this is not the case. If you’re thrashing away at an acoustic all night, a rough-finished or thicker plectrum can fatigue your wrist quite easily, and not everyone is going for punishing, unrelenting power.

This is where judging the Wave becomes unique. While it would be utterly ridiculous to state that one couldn’t use a strumming-orientated pick for any other purpose, being aware that this was its creator’s principal intention meant that I went down the acoustic route immediately. I don’t often find myself playing only chords, so applying myself to a specific activity was quite enlightening. For contrast, I put the Wave against my current favourite acoustic plectrum, the Taylor Thermex Ultra 1.25mm, which seemed fair, and was rather surprised by the results. When strummed exclusively, they both projected a pleasingly dense, reassuringly languid sound, ideal for any self-accompanying situation. Entering the single-note/triad realm however produced a very different outcome. The Wave was buoyant and clear, its highs ringing out perfectly, devoid of string noise.

I was very pleased. I started to try the Wave out on other things – my classical, a dulcimer, both hollow and solid-body electric guitars. Consistently, it was pretty good – not the brightest or most open sound I’ve ever heard, but that’s part of the design. In the context of strumming, the most important aspects of a plectrum’s tonal character are a lack of string noise, evenness, and clarity. The rounded tip and relative thickness of the Wave pushed its sound into a slightly hooded, relaxed thrum with lightly sparkled highs, which, looking at its breakdown on Rombo’s website, is exactly how it’s supposed to behave. The grip is also pretty good – detailed enough to feel tactile with my slightly dry hands, and reassuring enough that I could strum full chords quite comfortably for extended periods. It didn’t rotate in my fingers, and encouraged me to concentrate on playing, rather than thinking about what it was doing.

For the singer-songwriter who doesn’t require taut, focussed aggression in their sound, or for the acoustic player in your band, the Wave is a must. In broader application I found its single note tone a little reserved, and under normal circumstances I would be sitting here pointing out how it could be altered to broaden its appeal, but that would be missing the point. It’s like a city car – if what you want to do is drive around in comfort at your own speed, I can’t really think of a more appropriate vehicle. If you want to squeal your tyres while looking out of the side windows, continue in your search (or try the Diamond!). Graceful.