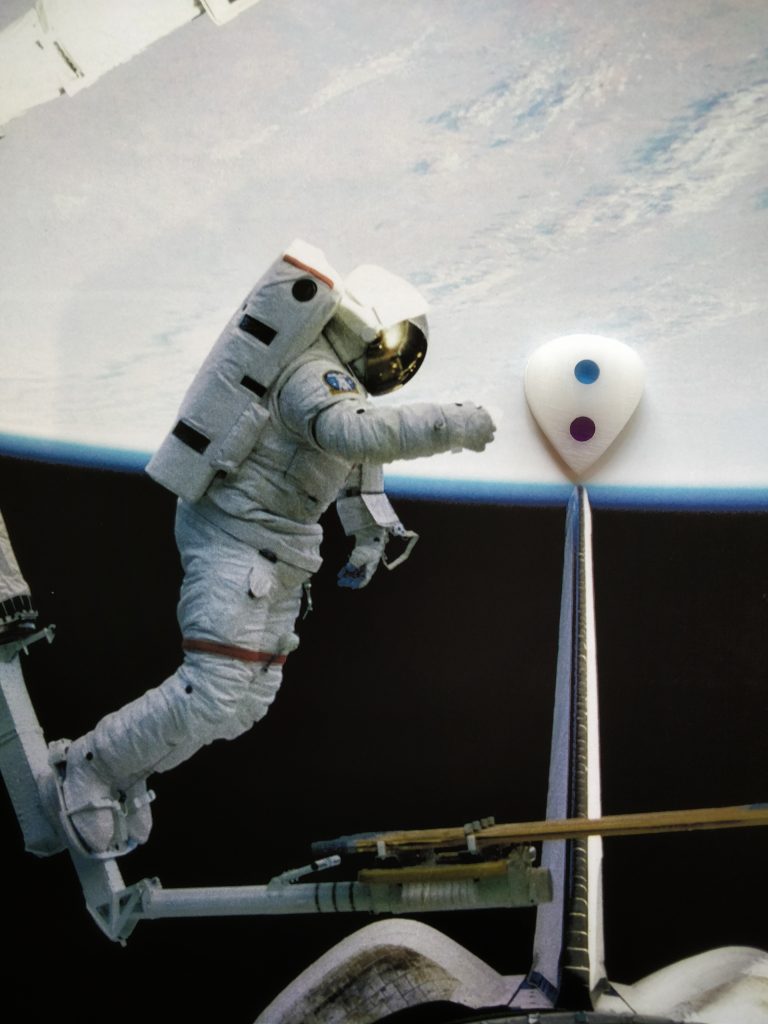 In the times before HR! was a thing, I remember scouring the YouTube for information about plectrums, and one of the most common videos I’d stumble across was that of Rob Scallon talking about The Picks I Use. In this piece he talks about the Purple Plectrum XXL, a monumental bit of gear that looks like a stolen organ. That is not, of course, what it is – rather it’s a huge plectrum that immediately and fully had my attention. I’ll never get my hands on one of those I thought, that seems impossible.

Dreams, of course, come half-true, and fast-forwarding to the present day, and I’ve got quite a few pieces from the company also known as Plexstrum. This incredible-looking thing is the Slash Optic, a UHMWPE (Ultra High Molecular Weight Polyethylene) creation that is even more striking in person than it is in the ridiculously dramatic photo above. Although it’s far from the first time that this pick has been mentioned here at The Rep – it came up as a featured plectrum in my Is Bigger Better? video – it is the first time that it’s had it’s own review, so let’s take a closer look at this remarkable device.

Measuring 6.8mm at it’s widest point, the Slash is no Sharkfin. Although its body is made from that most lightweight and hardy of plastics – UHMWPE- the two coloured ‘tubes’ are made from what looks like polished thermoplastics, though I initially thought they were Acrylic. Either way, it’s easily one of the best-looking picks in my collection, and the finishing – like all the stuff I get from this company – is excellent. What you might not see in the photo is that the top lines of the Slash are concave, making it a very carefully designed plectrum indeed, and adding an ergonomic touch.

One of my biggest bugbears with UHMWPE is that the grip is incredible if your hands are damp. If they’re not, a light grip is rewarded, at least in my case, with a wayward, irritatingly-loose hold on the hammer, and no-one wants that. However, the combination of the shape and optics in the Slash meant that it really fills the hand, giving you control over the slightly bewildering tone that these picks produce. I say bewildering in a truly kind sense too, as the whole Plexstrum range share an odd sense of otherness that it’s hard to describe. To date, UHMWPE is one of my favourite tone materials, and its ludicrously low drag means that it travels through the strings as if they were thickened air rather than steel. There’s greatly reduced string noise and the overall tone is one of both maturity and sophistication, not to mention the joy of holding something that looks like part of an alien starship.

The depth of the tone that comes from such a thing isn’t immediately apparent. Rather, it’s when one goes back to conventional picks that the nuances of the Slash become completely clear. Compared to an acrylic plectrum of the same thickness, the Slash was more composed during strumming, and delivered categorically bigger single notes. I would add however that it really does give you what you put in, so if you’re hesitant it really shows in the sound. If you play with glee or abandon, this will also be at the forefront of your tone, so it’s a great confidence booster as well.

Yes, the material can be off-putting at first, especially because grip is so crucial in a plectrum, but stick with it. I honestly find the benefits so rewarding compared to the conventions of any other material I’ve come across, and as UHMWPE has extremely high wear resistance, you’ll likely spend a year playing this thing and not even realise that it’s still the same shape. Sounds boss on acoustic too, so take the plunge!