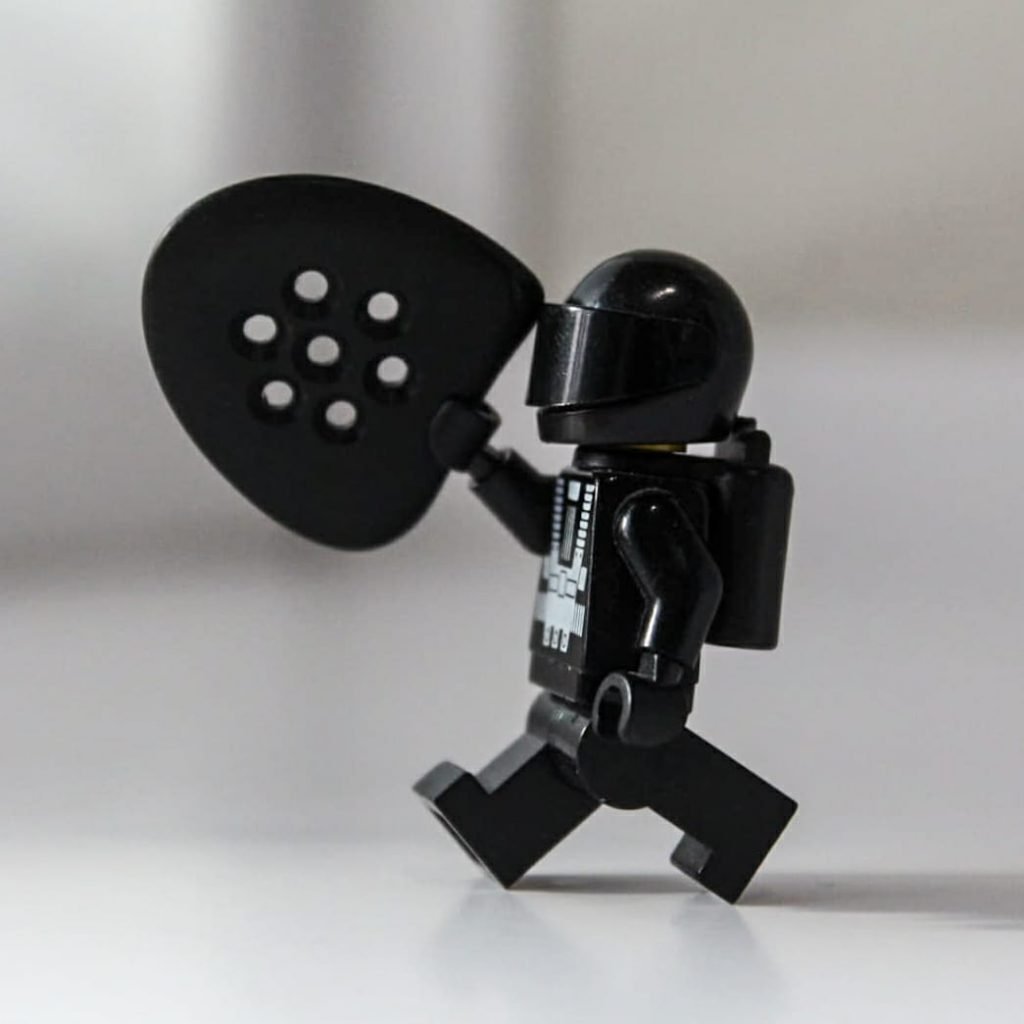 Ye shall know the tooth,
and the Tooth shall set you free.

Of all the genres in the realm of music, the most pick-centric is gypsy jazz. While other styles can be realised using any number of plectrological mediums, those players who favour the style known as “manouche” need heavier, blunt plectrums in order to facilitate their true vocabulary. One maker who builds these tools is Pedro Scassa, a Brazilian architect living in Rome. No stranger to the Rep, Pedro has made some of the most heavily-used picks in my collection, and today, we’re going to look at one of his most unusual – the Zanna.

Moustache
Measuring 25mm by 27mm, the Zanna is 3mm thick. Such an undulating design makes comparing it to other things almost arbitrary, but in the interests of common decency it’s a bit shorter than a Jazz XL and twice as thick. The closest comparison historically would be to the French Jura Large Fish of the 1930’s, or if one were to squint one’s eyes and be rather forgiving, the Landstrom Sharkfin. Neither of these is anything like this in practice. So there.

The Shadow
As it’s made from Delrin, the Zanna should, on paper, be pretty dark. Once this material passes the 2mm threshold, that looming, hooded quality associated with the thicker Dunlop Gator Grips or the Fellow Gorilla XL tends to be quite pronounced. The three-tips approach should help to balance that out, but instead, Pedro appears to have made a pro-plectrier move.

Triad
All three tips have a purpose. The biggest, roundest edge is chords forever, with a true softness that’s deeply understated. Slack, swinging strokes slip salubriously from my guitar – there’s no tie with this suit. Keeping the collar open but easing forward in its chair is a tip I’ll affectionately call The Hump – the second un-pointy one. The length of this edge maintains the dark, smoky feeling, but builds on it with a higher protein count, like the mute, knuckle-cracking thug standing behind a nightclub boss. I’m into it, but not as much as the Fang itself.

Hook Hands
The hooked fang tip is where it’s at. Despite the conventional murkiness associated with beefy Delrin, the sharpest point of the Zanna is easily one of my favourite tips. Compared to the conventional nylon ponk of a Stiffo XL, it’s a resolutely thick, bullish tone that hints at greater depths to whatever you’re trying to play. The absence of any real sharpness means it hurtles through the strings, and although it lacks treble, it doesn’t want for presence. Low notes are neat rather than tight – endlessly confident body-blows, calmly and firmly delivered.

Call On The Dark
Within my own style of playing, where I tend to eschew sharpened, glassy sounds, this is excellent, and ideal for the purposes for which it was designed. If you’re a sunny, acoustic strummer I would look elsewhere, but if the neon sign outside your favourite bar flickers in the night-time rain, get yourself one of these. Dig.