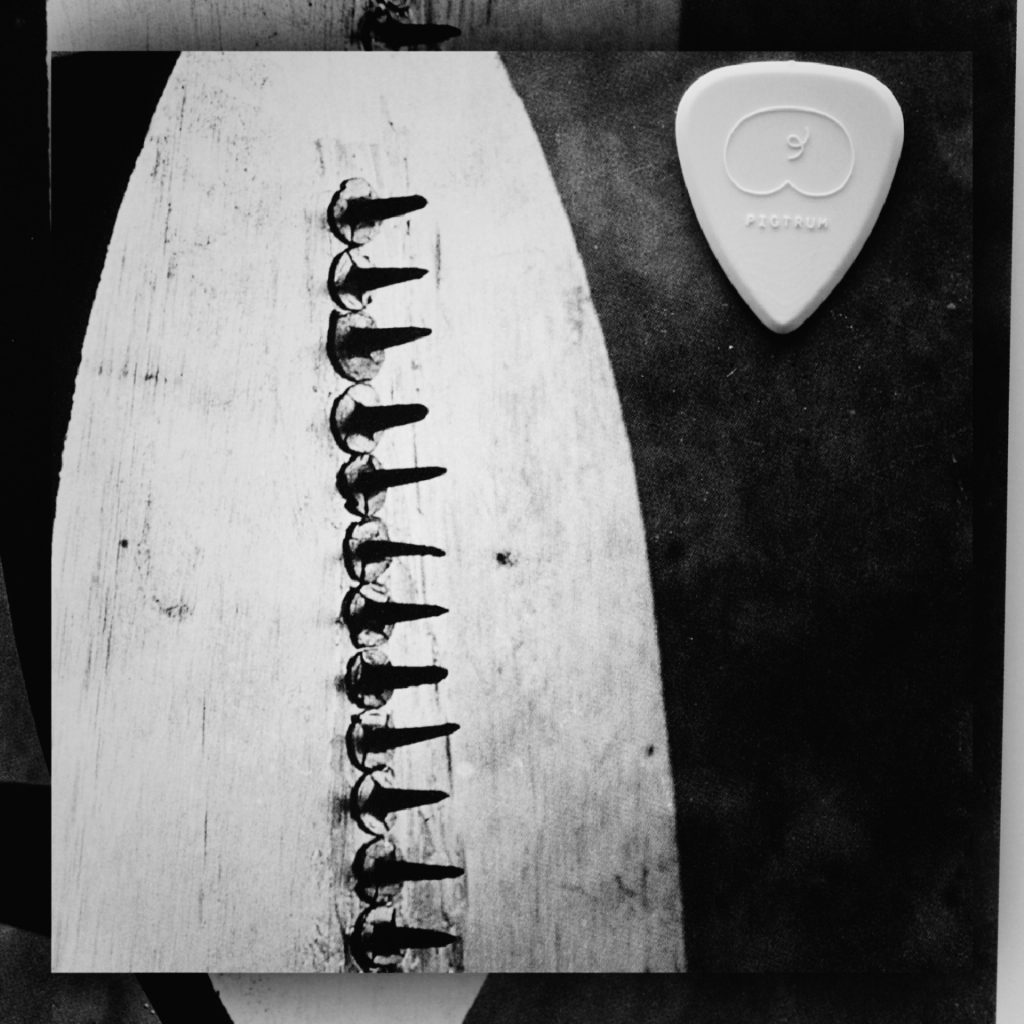 Since the 1910’s, the Plectroverse has been centred around plastic. This is perfectly understandable – materials like Celluloid, Acetal, Nylon and Acrylic are relatively easy and cost-effective to produce, and as guitarists are pretty careless as a general rule, it shouldn’t come as a surprise that synthetics have dominated the community. From the biggest names to the boutique end, plastics are still the norm, but there’s a few companies out there looking to change that. Of course, the most efficient way to make something become the norm is to make it affordable, and that’s where Tibor and Pigtrum come in. Today I’ll be looking at this new company’s only current model, and finding out if we’re entering a new and exciting age of Plectrology.

The Butt – as this model is known – comes in at 1.2mm thick, and has very slightly broader shoulders than a 351. Given creator Tibor’s taste in dj0nty-tech it’s refreshing to see Pigtrum not going straight for the Jazz III shape, and if anything, this reminds me of the Grover Allman picks, with its high, straighter corners and sharper tip. Much care has been taken here to give the Butt more poke and integral strength than its forebears, and this is principally due to the material from which it’s constructed. You see, Tibor has opted to have this pick made from a plant-based biopolymer, meaning that it’s biodegradable. It’s also extremely stiff, with a flex similar to that of Ultem, and a slightly tacky feel even to my dry hands. Instead of simply rolling the edges from the horizontal, there’s quite a lot of bevel here, something that contributes significantly to the sound of this Germanic design.

If you’re at the stage in life where you’re reading plectrum reviews you’ll know how much of a part beveling plays in the sound of a pick, from the way it can soften the sound of Ultem to the manner in which it removes bass from Nylon, and in the case of a material this hard it’s a merciful addition indeed. The first thing I noticed about the Butt is the absence of string noise, which is always a plus. It’s worth remembering that even at this thickness string noise can still be an issue for rigid materials, so chalk one up to the Pig. The grip is also very good, as it doesn’t rotate or migrate with aggressive use. Should you sand off the raised rump section, the grip remains very high, and I greatly prefer it to both Nylon and Delrin. I’d also say that it’s rather a handsome piece, finished in ‘creme de la creme’ and even having a little bit of a grain.

For comparison’s sake, I pitted the Butt against a conventional Celluloid and Delrin 351. Compared to the springy, wide-eyed jaunt of the Celluloid and the older-but-still-young sprang of the Delrin, the biopolymer pick was very serious. Not joyless by any means – perhaps ‘studious’ would be the best description. I loved it on acoustic, especially where grand, slightly jarring chords were concerned, and on electric the feel and delivery were much the same. It reminded me very much of the Killy Nonis Turbo I reviewed a few days ago, in the sense that its creator’s character seems to fundamentally inform its sound. Listening to Gaudiopolis’ music with my Pigtrum experience in hand, the off-centre, straight-faced cuts, jabs and slaps make complete sense viewed in the context of this plectrum – the music is not a comedy, and neither is the approach that Pigtrum are taking.

At a price of 4 Euros (if you buy two – it’s on a sliding scale) this is pretty cheap pick for what it is. The material feels like it’ll weather the storm of your constant hammering pretty well, and it’s worth remembering that at this price it’s not designed to be indestructible, but a viable alternative to plastics like Nylon/Delrin etc. If you buy 10 of these they run at 3 Euros a time (£2.58 or $3.39US at the time of writing), and as Pigtrum are pretty new this utterly reasonable price may come down in the future. Fiscal matters aside, this is a great piece of kit for playing most styles you’d care to mention, as long as you’re serious. Sehr würdig.