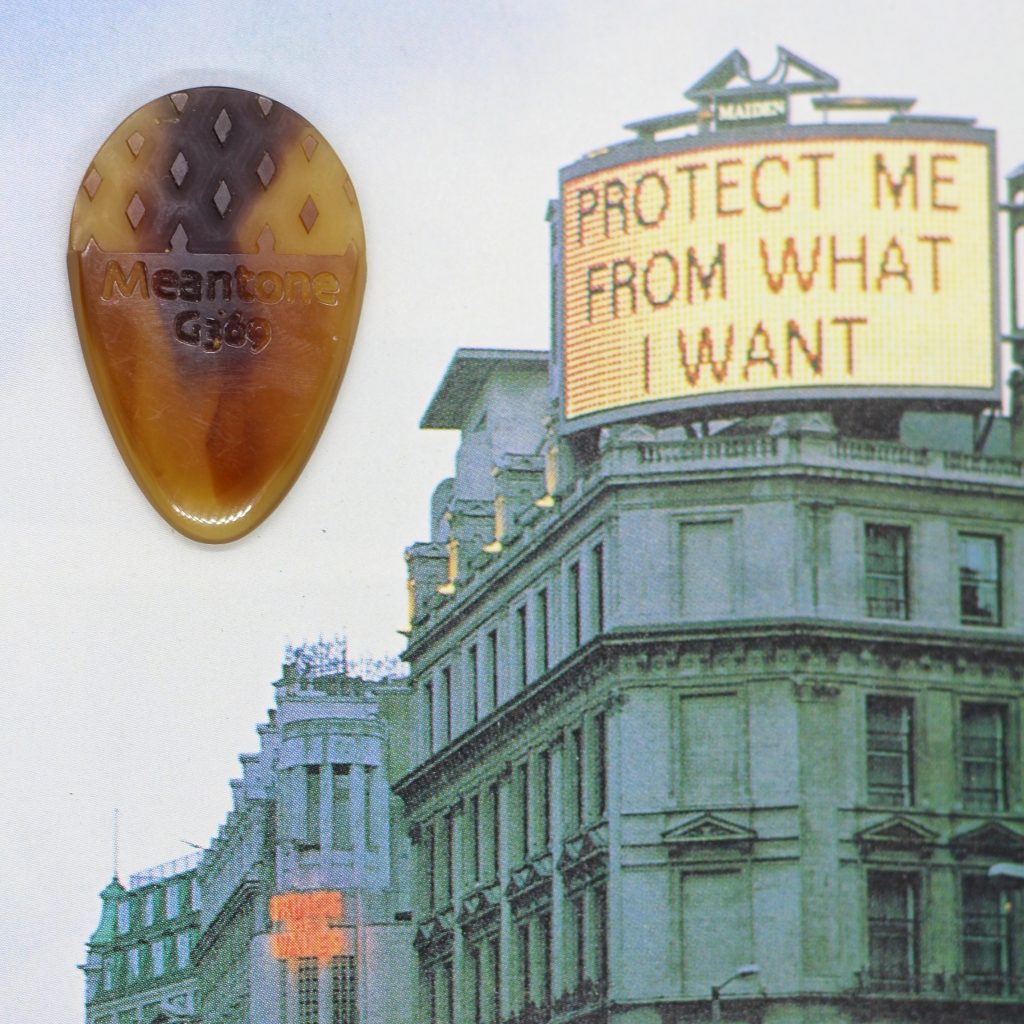 Of the makers who have risen to prominence in the last 12 months, few carry the inherent elegance of Meantone. Nestled in Belgium, life-long musician Michiel has consistently delivered concise, immaculate picks in both bold and traditional shapes. This piece, however, is something else. Today, let’s take a look at the G369, and find out what’s what.

Specs
Measuring 31.88mm long and 20.92mm across, the 2.85mm thick G369 is made of Galalith. A hair longer than a 351 and significantly narrower, the shape is based on the vintage mandolin picks from the turn of the century. The upper section is sanded, sporting miniature diamond grips, with a highly-polished lower section. This style being so far removed from the modern landscape, one would think that an alien, awkward holding position would result. As we’ll discover, this couldn’t be further from the truth.

Feel
Holding this slender piece in the hands feels like an event. Being in the position of having the original designs to compare it to, the highly robust nature of Galalith makes this a truly different experience. The grip section being so elevated means that it installs firmly against the fingers, and against the crook of my index finger the G369 shows no signs of unwarranted movement. Any initial oddness from the disparity between the gleaming polish and tactile top part melts away as you engage with your instrument, so fear not. A tip this blunt would normally place a plectrum deep into gypsy territory, but the slim cut makes it surprisingly articulate.

In Operation
First and foremost, this is an old design, reimagined. Any thoughts of blazing Jazz III tremolo picking or aggressive downstrokes are far from the land of G369, but what remains is an entity in its own right. Rarely does a pick lend itself more to hybrid picking than this. Comparing the feel to other Galalith entries in the collection, there’s a muted quality to the upper mids, with reserved treble poking over the top. The bass is typically tight, offering a discerning, mature strike. It is as one might imagine in that sense – resolutely old-school and forceful.

Stacked up against its contemporaries, this is clearly not a pick for everyone. That being said, it offers a number of things that the casual guitarist might not consider. It’s like a time capsule, augmented for the modern day. The G369 is extremely serious, its hard, committed nature offering a glimpse into the nature of plectrology in the days long since past. Remember, prior to the Nick Lucas breakthrough at the start of the Golden Age, this shape and others like it were very much the norm, with the forms we take for granted being in the minority. Used as nature intended, this is a tremendous pick on mandolin, where its character changes from stern professor to jolly bard.

Conclusion
Michiel (along with James at Northern Ghost) is at the vanguard of the reimagining trend currently taking place in the Plectroverse. A lot of these older shapes are considered impractical from a modern players’ standpoint, but great care has been taken to ensure it performs not only as it should, but better. Immaculately finished as all Meantones are, the G369 is unbelievable on its native instrument, and a hard, focused plectrum everywhere else. Enchante!