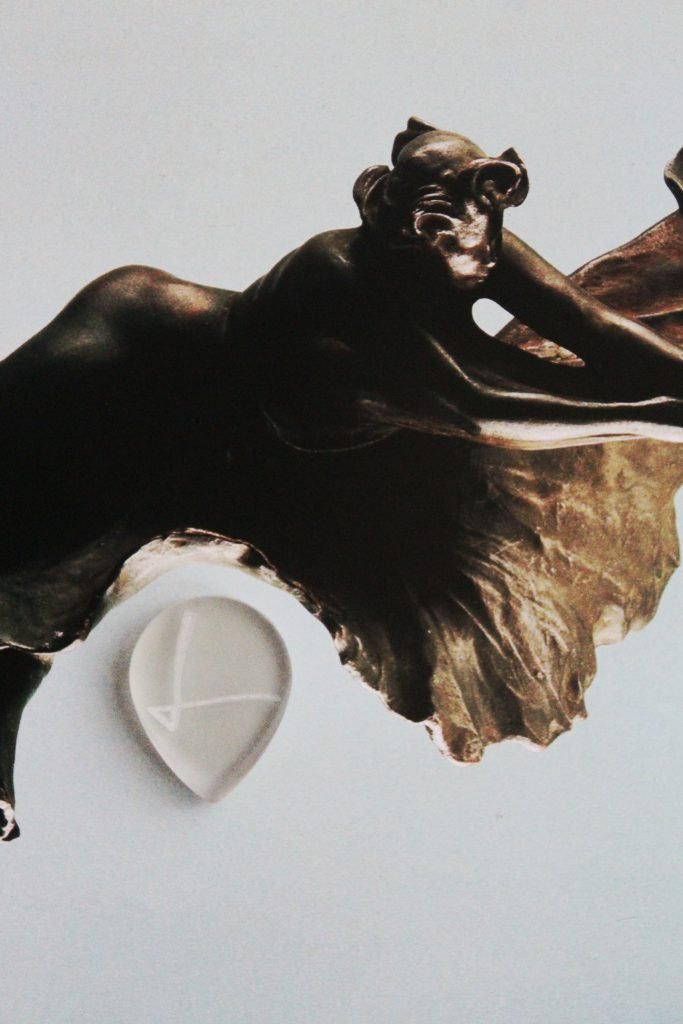 I brushed it until it shone and looked somewhat like it used to look, only far thinner, and less glorious.
― V.C. Andrews

It’s not often that a luthier makes picks, in earnest. Though there are exceptions to the rule, the majority of makers concentrate on specific fields and the refinement thereof, rather than spreading their talents across such disparate – albeit related – fields. One of the outliers in this crazy game is Ben Liggett of Liggett Guitars, who has built some amazing kit like the Picasso. I spoke to Ben a little while ago about some picks he was making, and today we’re going to talk about his stubby sweetheart, the Liggett Sweep.

Shake The Broom
Measuring 33mm by 25mm wide, the 5mm-thick Sweep is crafted entirely from frosted Acrylic. The top is both hard-edged and neatly domed – this misty gem looks like it would have been perfectly circular had the impetus to bevel not intervened. The fancy-looking ‘L’ on the face of this plectrum isn’t cut especially deeply, and although I could feel it with my fingertips, I didn’t notice it in operation. It’s not as intimidating a pick as some of the bigger pieces can be. It is, however, blunt as a spoon.

Stump
Why is it so rounded you might ask? Well, the purpose of the Sweep is just as the name implies. Ben wanted a plectrum that was ideally suited to swift string-to-string transfer, and shaped this big boofer accordingly. Most of the makers I know who’ve done these sorts of shapes have been aiming for the jazz crowd, but the Liggett is predominantly gunning for electric players who want to have zero resistance when moving across the instrument. This isn’t like the Pointless Picks though. Where those plectrums are a literal circle devoid of power, the rounded tip of the Sweep is meant to allow sweep picking with almost comical ease. Sadly for the Plectroverse, I never learned how to do that. All is not lost though, as I do an awful lot of raking, and the striking hand approach is very similar.

Brushed Aside
Positives first. Those of you who are accustomed to the upper end of the cruiserweight division will be right at home here. The Sweep feels soft, but meaty. The grip is great – the rounded shoulders go into the crook of the finger with ease, and although the right-angled upper edge is noticeable at first, it’s by no means intrusive. Because the bevels start immediately where the fingers end (my fingers anyway) the pick makes full use of its beveling, resulting in an almost soap-like transition when striking. It’s impossible to go into the strings with any anger – if you’ve ever tried to stack Hiscox cases, you’ll be familiar with this feeling of contact. The sound is rather charming and good-natured, and isn’t lacking in power despite the almost glancing-blow sensation. Notes appear curiously plump, and if I were strumming an electric all night, there’s very little to complain about here.

Humpty Thumpty
The downsides to this design are few, and likely obvious to the seasoned observer. Picking individual notes is an odd experience, because the tip is so round that you’re past it before you know where you are. Combined with a 5mm thickness and a point that is itself 1mm across means that mandolin-style cross-picking is a near-impossibility. Any rhythm guitarist who takes a spin on one of these would find other picks to be needlessly sharp and urgent afterwards. Even compared to the corner-free Killy Nonis Turbo, the Sweep is softer than a worn-in couch, and makes the Turbo sound like a raving lunatic.

She’s Lump
If this were made of a material like Derlin it would sound like a woollen muffin. Being made of acrylic balances out the softness of the design, resulting in a truly excellent strumming/rhythm pick. Let’s not forget, the purpose of the Sweep was to glide effortlessly like a shreddy cloud across whatever graceful pattern you’ve been practicing, and I can state outright that this will definitely happen. With that in mind, it’s not meant to be a mando-sharp, trem-picking sword swinger, and stands very happily in its own world. Grace.