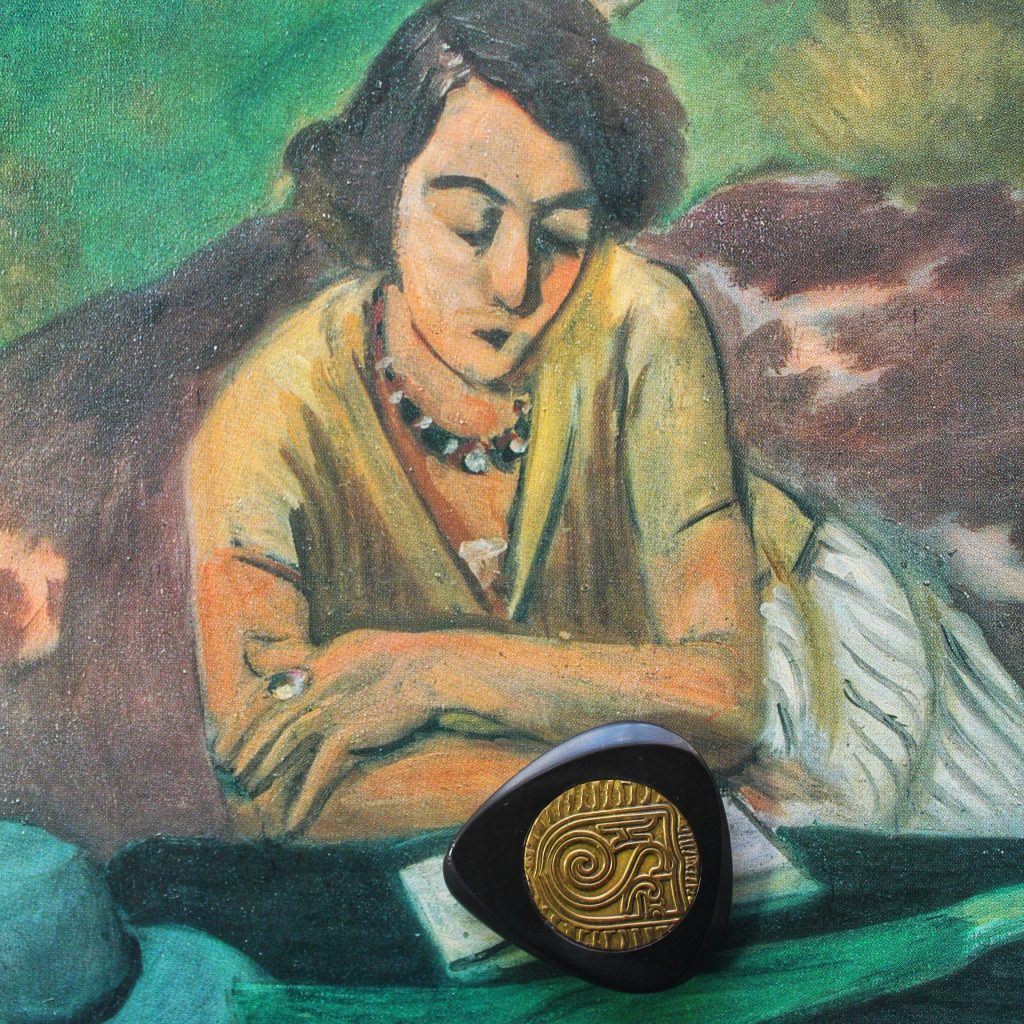 Easily the most pick-centric genre in music, gypsy jazz has more dedicated plectrum companies than any other. Even though I’m no jazzist and certainly not a gypsy player by any means, I can still judge a pick based on its functionality, and some time ago while wandering the ‘Gram I came upon Killy Nonis picks. Comfortably some of the most handsome work I’ve seen from any maker, I felt it was my duty to get my hands on one of these and report back to the Plectroverse, so today, I’m going to give the Turbo a stiff going-over.

Standing properly rigid at 3.3mm, the Turbo is made from a highly-polished black material that behaves like Casein but with a subtle tactile difference to its surface. That dramatic centrepiece is crafted, solid brass, with a material called Stingray on the back. Mottled and lumpy, it’s a genuinely confusing substance, which seemingly smooths itself out instantaneously as soon as you get your hands on it. I shall confess that this was initially a rather odd situation, but as I was to discover, this was hardly a shame.

The Turbo is a little larger than a Jazz III XL, with oblique, right-handed bevels on all three corners that are pretty extreme. Any and all of them do the business good and proper, though the obvious edge glides through the strings with immense grace and gravity. I can’t remember any pick other than the Wegen Trimus 250 that delivers as much power as this thing – acoustically it’s almost hilarious how focused it is, and indeed, as it was designed for Macaferri interaction, the Turbo pushes out single notes like a cannon. This is something that I discovered when taking it for a spin on a Vintage Viaten tenor guitar, where it produced more volume than I though humanly possible from such a tiny instrument. Watching the footage that I shot back, the combination of an all-laminate Tenor and the Turbo managed to completely drown out a solid-top orchestral acoustic.

As a predominantly eletric player though, I spent a lot of time taking Killy’s creation out of its comfort zone – here’s where the really interesting stuff happens. Clean, there was a crazy amount of poke, which let me deliver exactly what I wanted to say (particularly with compression), and driven, the scope of it was absolutely daft. Chords and riffs roam around like prowling, swaggering panthers, with a big wide grin lurking in every flick of my right hand. It made me toss out all sorts of slithery lines, and unlike other picks that are this rigid, it doesn’t possess an inherent darkness. I’m a great believer that the true spirit of each maker is bonded to their work, and so far, I’ve found that to be the case. Everything I’d read about Killy prior to my dealings with him let me know that he was a stand-up guy, something that was reinforced in the postcard he sent me with the Turbo (which was a picture of his cats). I didn’t feel like playing doom, grimy horror or black metal with this thing, and even though I could, it felt wrong, like I was going against its creator’s wishes.

So, a win all round? Well, at $32.00 it’s not cheap, and the chirp – which is to be expected from a plectrum this rigid and thick – was clearly evident. Although the grip can, like a lot of materials, be a little slick when my hands were cold, as soon as there was a lick of heat, it clung in there like there was no tomorrow. This is, however, one of those occasions where we need to be mindful of the Turbo’s intended use. Killy makes Macaferri guitars which have a singular purpose – old jazz – and his picks were designed and crafted for exactly that. The fact that I was able to take this incredibly specific tool so far outside its remit was frankly astonishing, and it kept creeping back into my pocket time and time again. I’ll add that I hit my pickups a lot when I play – not intentionally but as part of my physical approach – and the initial battering I gave the Turbo resulted in a couple of significant marks. Miraculously, those have completely disappeared with extended use, and without the aid of abrasives of any kind.

This pick is a work of art – a positive, jolly piece that feels like a true event in use, and acts as quite the talking point whenever I pull it out. Does it work for everything? No, but as it was really only meant to do a single job, it covers way, way more ground than it should. Glorious.