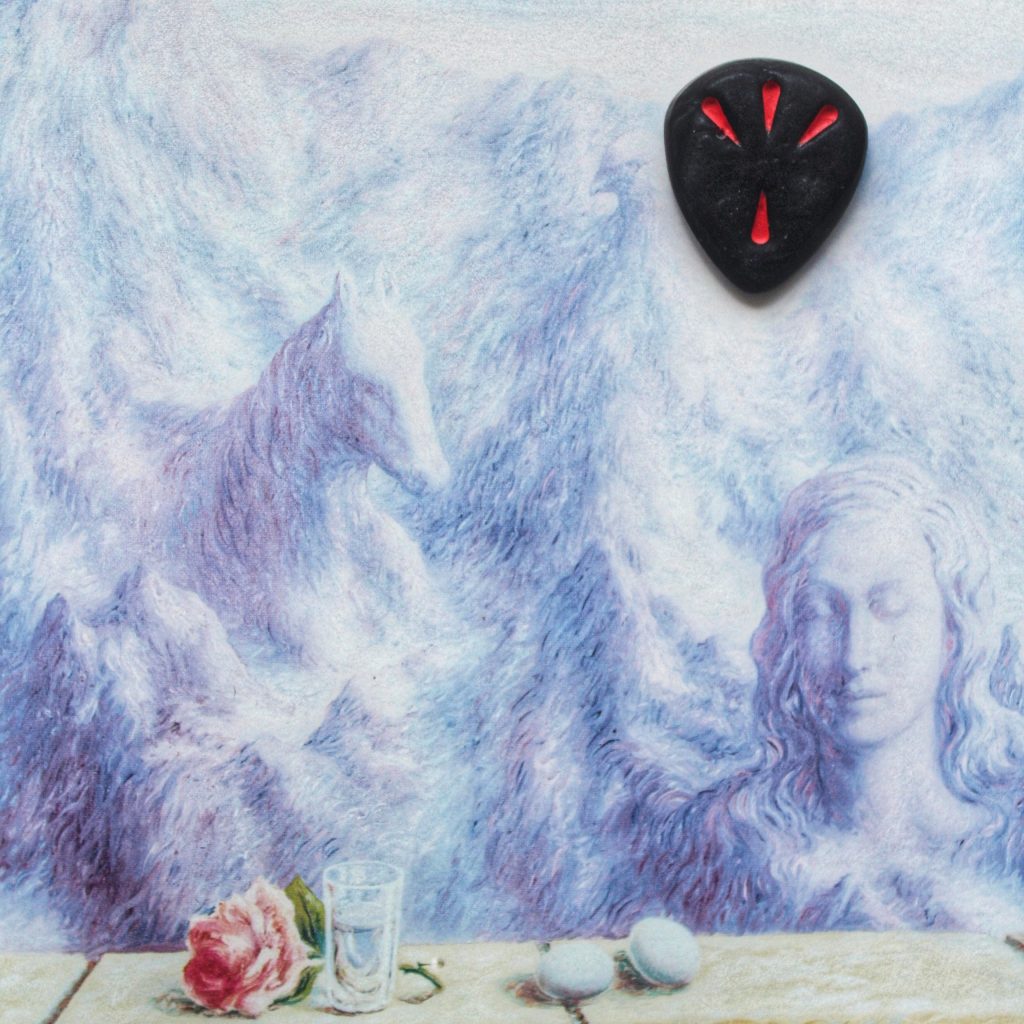 “It’s a cruel and random world, but the chaos is all so beautiful.”
― Hiromu Arakawa

I’m a big fan of people taking risks in the Plectroverse. Every new maker that gets added fills me with excitement, especially when they’re looking to do something different. In the last year, there’s been an increase in new makers, and one of the most marvelous additions to the Plexicon is JRC Plectrums. I’ve been lucky enough to see Johnny’s style begin and adapt over time, and today I thought I’d finally give his Chaos Blackbird Flow a spin.

Crafted by hand from Epoxy Resin and clocking in at 3.1mm thick, the Chaos Blackbird Flow is a hybrid of the 351 and the XL. Johnny’s gone to great lengths to shape this thing, and although there’s physical similarities to Dunlop’s middle child, there’s a number of key differences. Aside from being more than double the thickness at it’s most pronounced, the resin that makes up the body of the Blackbird feels lighter and stiffer than a conventional XL. If I were to really place my hat, I’d say it’s closest relative would be the Dunlop Petrucci (the half-and-half one), with which it shares a similar lightness. Johnny’s signature ‘Raven’s Claw’ is carved into the front, and although the grooves are relatively deep, I didn’t find them to be in anyway intrusive.

This pick presented me with an interesting situation. I don’t have a lot of stuff made from resin, and I’ve seen varying results with it in terms of wear. I don’t baby any of my picks – they’re tools after all – and I shall state that giving the Blackbird a good rattle didn’t yield any markings or sudden abrasions, which I put down to a few things. Firstly, resin comes in different forms and differing levels of quality, so I can only assume that Johnny has gone the extra mile here and opted for some very serious material. Second, particular attention has been paid to the beveling – the tip of the Flow isn’t sharp by any means, and the edge of the ridge running round the striking area has been gently smoothed to prevent it from notching.

As a result, the tonality is not what you’d expect from such a thing. To give it something of a benchmark, I put the Blackbird against an Eric Johnson Jazz III and a V Pick Medium Pointed Woodstock, which served to measure it against its peers. With resin not being as common in the Plectroverse, I wasn’t going in with the same assumptions I would have about, say, acrylic, and was therefore completely open-eared when it came to its behaviour. Due in part to the rounded tip, the Blackbird has a dark, brooding quality to it which made me think of the rooftop solo in The Crow – no pun intended. It sluiced through the strings like a ghost with a drawn sword, its brow furrowed and with a hooded, albeit balanced nature. In contrast, the V Pick was positively beaming with joy, the Johnson giving a slightly bass-light approximation of the same, minus the sparkle inherent in acrylic. Going back to the Blackbird felt like reading Edgar Allen Poe – a grim drama, heavy with its own charming darkness.

The grip is excellent, and managed to perform the task of working for all the skin types in my testing pool, which is not a given. In conjunction with its natural lightness, this gave the Blackbird a curiously carefree feel in operation, which I enjoyed very much. I say curious, because you’d expect something so naturally morose to feel heavier, but it rattled away no bother at all. In reference to that musky tone, I wouldn’t put it in the same treble-less bloom as the Taylor Thermex Ultra – the Blackbird has much more of a driving nature to it, and the extra thickness gives more in the mids. There’s a few finish imperfections on this example, but I received these picks a couple of months ago, and Johnny’s addressed the issues since then, so if you’re into these you can buy them with resolute confidence.

I’ve never been an especially sunny guitarist – the music for which I’ve reserved my heartfelt appreciation has always contained the spirit of the dark and the dramatic. Spending some quality time with Johnny’s creation really did put me back in touch with my roots, and that’s something that I truly appreciate. If you’re looking for a pick to go with your slightly gothic tendencies, I strongly recommend this. If you want something airy and bright, look elsewhere, but for those who love reverb and operating from the shadows, this is a beast. Foreboding.

Painting is Rene Magritte – View From Above, 1950