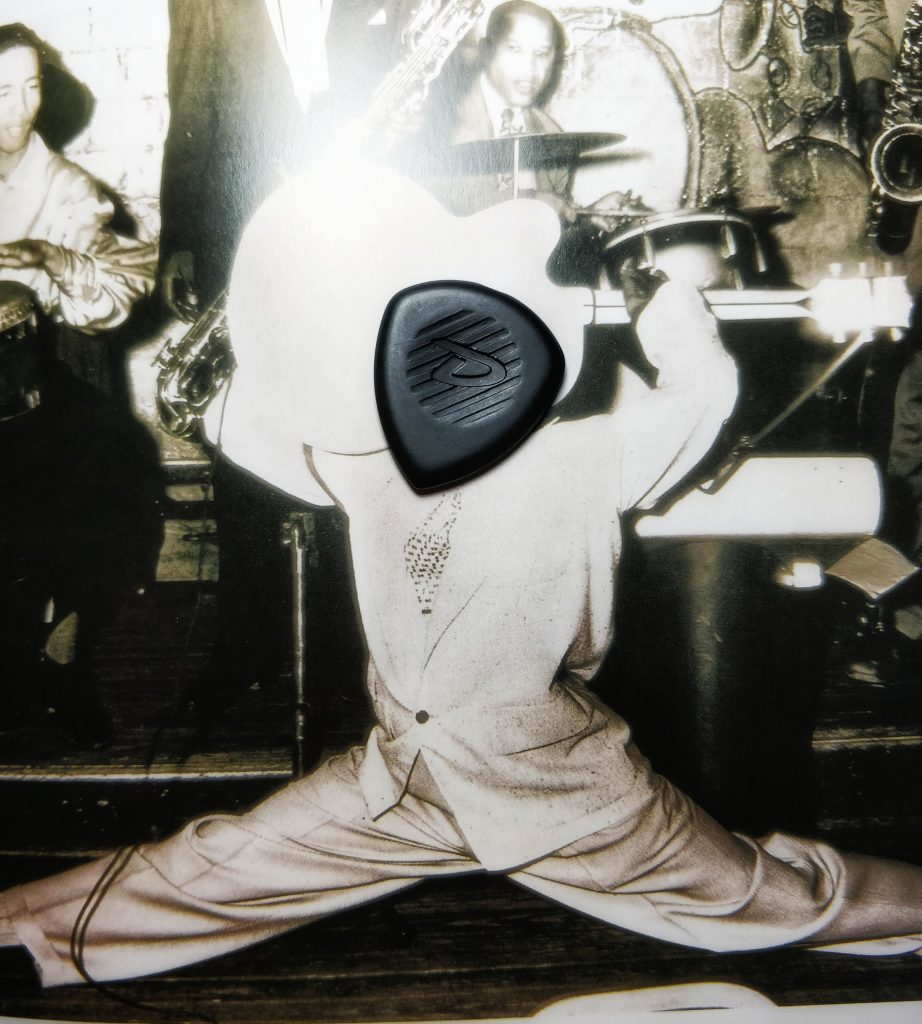 200 times stronger than glass, Polycarbonate is a relatively commonplace material in plectrum construction, cropping up in the catalogues of companies like Swiss Picks and PickBoy. However, there’s one plectrum that doesn’t really get its due, and that’s an especially undersung item in the lineup of the Plectroverse’s big dogs, Jim Dunlop.

The Primetone Polycarbonate is a plectrum you’ve probably never thought about, but it’s worth cocking an ear to this off-centre offering. I first came across these because fellow plectronaut Conan Burke of Backhand Saloon kindly gifted me the 5mm rounded tip version, but as I’m not a jazz guitarist, I ventured out to find if a pointier version exists, and was confronted with the pick you see before you.

3mm thick and made of very black Polycarbonate, the first thing that struck me about this less-seen gem is how much grip there is. It’s not just the obvious slat-grooves – one side of the pick dips gently in the allow for even better handling, and I found that this was a bonus whether you used it to aid the grip of your thumb or fingers. This plectrum also comes with different styles of tip, with this particular model being the sharpest. It’s not like the disconcerting razor-point you get on a Tortex Sharp, but it’s pronounced enough to have a comfortably broad field of application.

As I am an honest man, I’m not going to pretend that this material, in this form, doesn’t chirp. On the plain strings, you’re going to notice a borderline-Acrylic level of high-pitched activity, but after some extensive testing, I can assure you that this is confined to the bridge pickup in the event you’re using higher levels of overdrive. If you’re playing gently, the relatively slow pace of the pick over the strings will also cause this phenomenon to manifest, but if you’re strumming, chugging, trem-picking or raunching away in any sort of chord-based manner, you’ll probably not notice it. I also like the fact that the rounded bevels get through the strings good and proper, with a slicker push than you’d perhaps expect.

Tonally speaking, the Primetone has a slightly bonky quality. It leans towards the mid section of the EQ, with the bass being less evident than that of the more serious and composed Dragon’s Heart Original. Compared to the Swiss Picks Nuclear Cheddar 2mm – also Polycarbonate – it’s darker and less urgent. These two picks are 1mm apart in thickness, with the Dunlop being the broader of the two, and the difference is quite clear. I banged out my usual practice routine with the Primetone and found that although it played very well, the notes didn’t jump out the way they did when using the contemporaries listed above, and that on acoustic it was disappointingly stiff-sounding. This was a shame, and something that I also found when using the right-hand-beveled 5mm version, so look somewhere other than Polycarbonate if you’re a bronze-clad strummer.

I said to a colleague of mine the other day that this was a categorical example of a 6.5/10, and after further testing, I stand by it. It’s very tough, good-looking and with excellent grip, with a flat, reliable tone that, while non-descript, is acceptable. The problem is, that compared to other picks of a similar nature, it doesn’t stand out enough, and side by side with its cousin the 208, doesn’t feel all that special. That being said, if you’re looking for a hard-wearing, grippy plectrum that’s ideal for players who wish the Jazz XL had a higher surface area, this is exactly that. Certain, in a clumsy sort of way.