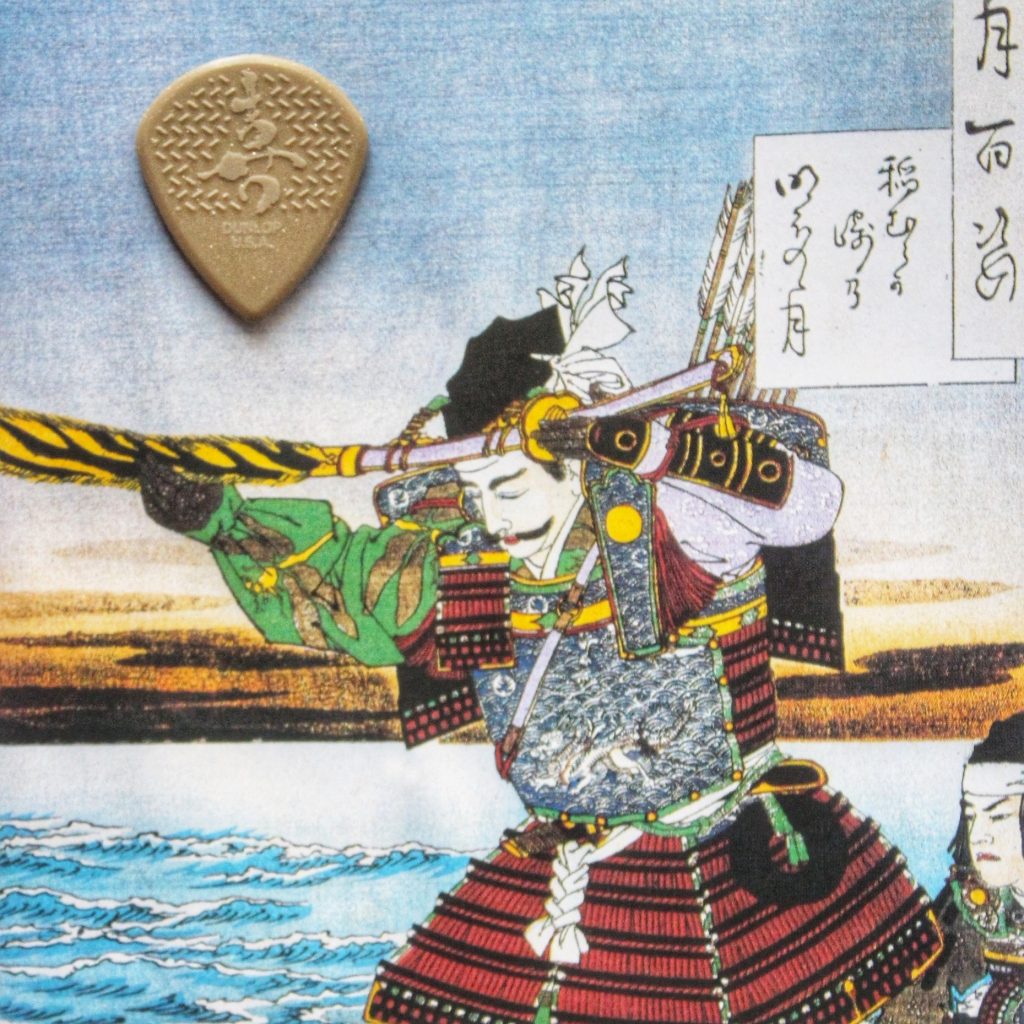 Weathering the storm like a pro, Matthew Heafy has taken a fair bit of heat over the years, ever since his band Trivium leapt onto the scene in 1999. For all the beef and slander, Heafy has risen above it, with Trivium releasing their eighth album (What The Dead Men Say) on April 24th 2020. A guitarist of some note and ability, Heafy has been using Dunlop Jazz III‘s for years, and Dunlop have honoured this by issuing the pick I’m going to have a test of today, the Matt Heafy Signature Jazz III Gold.

So what’s different about this from the normal Jazz III? Heafy has been quite open about how the source material was pretty spot on, and that his collaboration with Dunlop didn’t change a great deal. However, that’s not really telling the whole story. The MH has the kick-plate embossing of the Max-Grip series, with the kanji of ‘kii’ (undefinable) on one side and ‘chi’ (one) on the other. The material itself is a more dense blend of Nylon – a special mix that Dunlop concocted for this pick – but more on this later. The striking tip is 1.3mm thick, identical to that of its standard red Nylon counterpart.

Despite being modelled after and having the same footprint as the conventional Jazz III, the MH is more pick. Being in the position to compare it to the Red Nylon, Black Stiffo, Max-Grip Stiffo, Carbon Fibre and Ultex versions of the same pick, I would poke my head up for slapping and say that this might be the best all rounder out of the lot. Sharing the same tip as the shredder’s favourite red bean, it nevertheless delivers a deeper poke than you get from the standard model, with a little more joy in it than the rather serious, flat-sounding Stiffo and more grace than the single-eyed, club-swinging Ultex. Compared to the normal Max Grips, it feels more organic than the Stiffo and less mechanical than the carbon, placing itself at something of a tonal crossroads.The grip, at least on the versions I had, is the first in ages to make me think of the BHL Exultem, a plectrum so dangerous that its grip had to be tamed before it went into production. It’s almost uncomfortably clingy, and while this will no doubt back off with repeated use, it’s something that might put players used to a smoother surface off.

That would be a shame, because if you’re into the Jazz III, this is a beast of a pick. Given Heafy’s chosen discipline and fixed-wrist play style, this thing goes beyond making sense to being almost compulsory. Though unlikely to be many player’s first choice for acoustic work, if you’re reading this article, I’d suggest grabbing some immediately. Full-bodied, purposeful, cheap and, dare I say it, rather handsome, it’s proof if proof were ever needed that changing the tiniest of things makes a colossal difference. If Dunlop bring out a Jazz III in this material, it should give Old Red a bit of a shake. Very, very good.