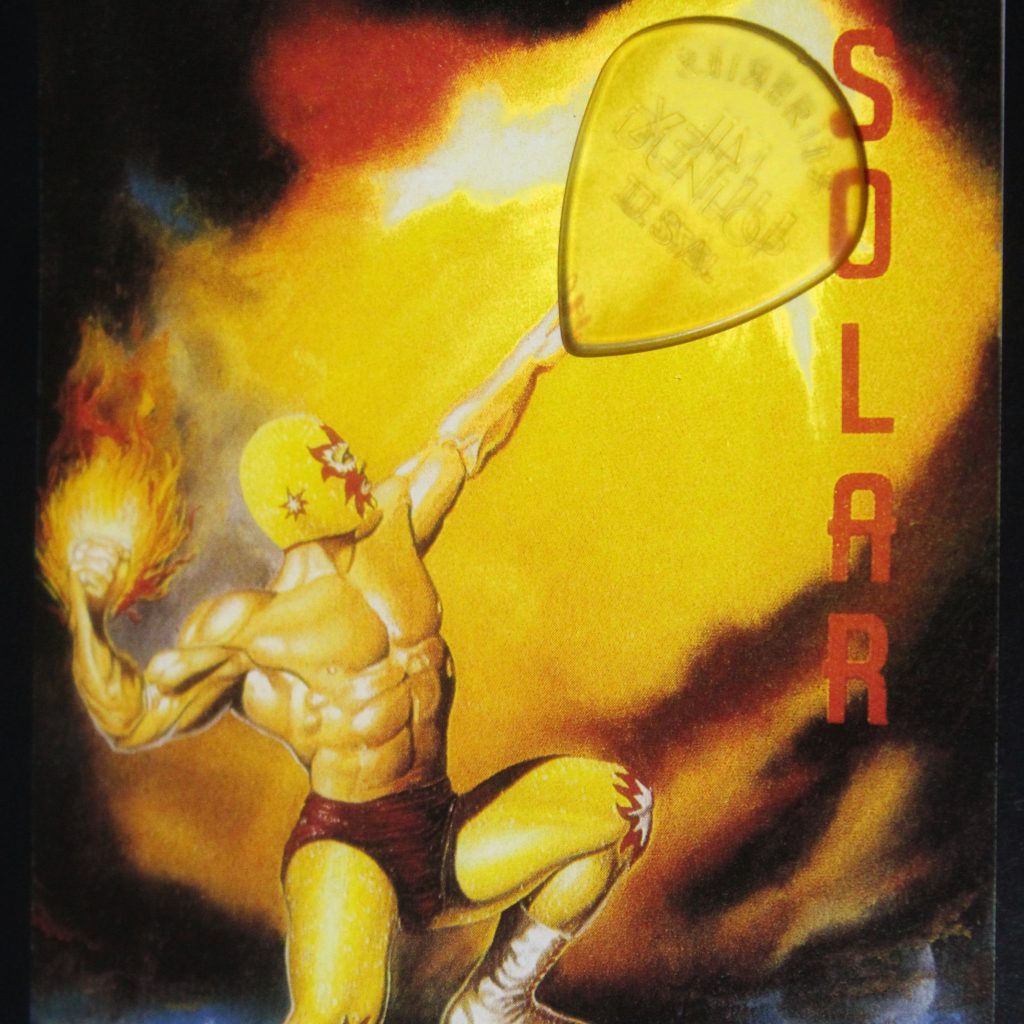 In many respects, it’s surprising that we don’t talk about this plectrum more. Any player who has encountered the Dunlop Ultex Jazz XL will remember the first time – the rush of brute force, the grip, the ridiculously high level of power – it’s all a bit intoxicating really. I even remember where I was when it happened – we’d just got a bunch of picks delivered to Wunjo Guitars, and I was starting to get into picks more seriously. This pee-coloured, bone-sturdy plectrum was among them, and one of my colleagues told me that they’d been relying on these for years. It’s the reason that playing a pick with any flex feels wrong to me, so you can thank it for everything on this site. Today, I’m going to review it objectively, with the benefit of hindsight, so let’s go.

The Ultex XL is, as far as I can tell, the most stiff of all the Dunlops. Yes, there’s the unyielding Jazz Polycarbonates, but there’s a certain elegance to those thick, slinky weapons. What’s different about the XL is that it’s stiff in every possible respect – grip, rigidity, tone – and there is no real grace to it. While it can certainly be applied in a more reserved manner, it’s a crashing, square-shouldered thug of a pick, so if you’re seeking the glassy stride of Agate or the slick slither of Acrylic, please search for your princess in another castle. It’s not especially joyful either, and because it hits so hard it’ll make your acoustic sound like it’s exploding.

Why, then, do I love it so much? It’s the same reason I choose a melee class in games – knocking the crap out of everything is great. When you’re on stage in the heat of battle, thrashing with everything you’ve got, you’re not thinking about subtlety, note separation and nuance, you’re ramming your tracks down the collective throats of the audience. 30 people came out to see you and you’re damn sure going to grind every one of them into a coarse powder, and hell, you’ve been using this pick for months without it even starting to change shape, so why stop now? It’s the reason we love action movies, kung-fu flicks and watching James Bond cause untold collateral damage – there’s something primal and satisfying about the shoot first/ask questions later approach that we can’t turn away from.

The tone is like brick, with little scope for genteel anything. There are a number of reasons for this; Ultex is extremely hard, the beveling is arbitrary, and the lightness of the XL means you don’t know how hard you’re swinging it. That being said, even the most tepid adventurer would still be holding a screaming, raving caveman in their hands, a genuine Dynasty Warriors button masher of a pick that operates between a straining 8 and a solid 10. The focus is in the bass and mids – lots of mids – and the attack almost seems to precede the note you’re about to strike. The grip is one of the few that seems to agree with the majority of skin types, something I can confirm from playing other Ultem/Ultex picks from other makers. Bonkingly hard to the point of devastating, it lacks the suited-boxer charm of a Wegen or the knowing thrust of a BHL – more George Foreman than Joe Louis.

This isn’t to its detriment – Evander Holyfield once said of Foreman: ‘He hit me in the arm and my entire body went numb’. During Foreman’s post-retirement fight with Holyfield, he took punch after brutal punch without answering, slowly advancing towards his utterly stunned opponent like a zealotous terminator. The Ultex XL is his pick – a savage shotgun of a thing that hits like an iron bar. If any of this sounds appealing to you, go to your local music shop and buy one immediately – I can promise you won’t be disappointed. However, be warned – this is what started my collecting fever, and it could happen to you too.