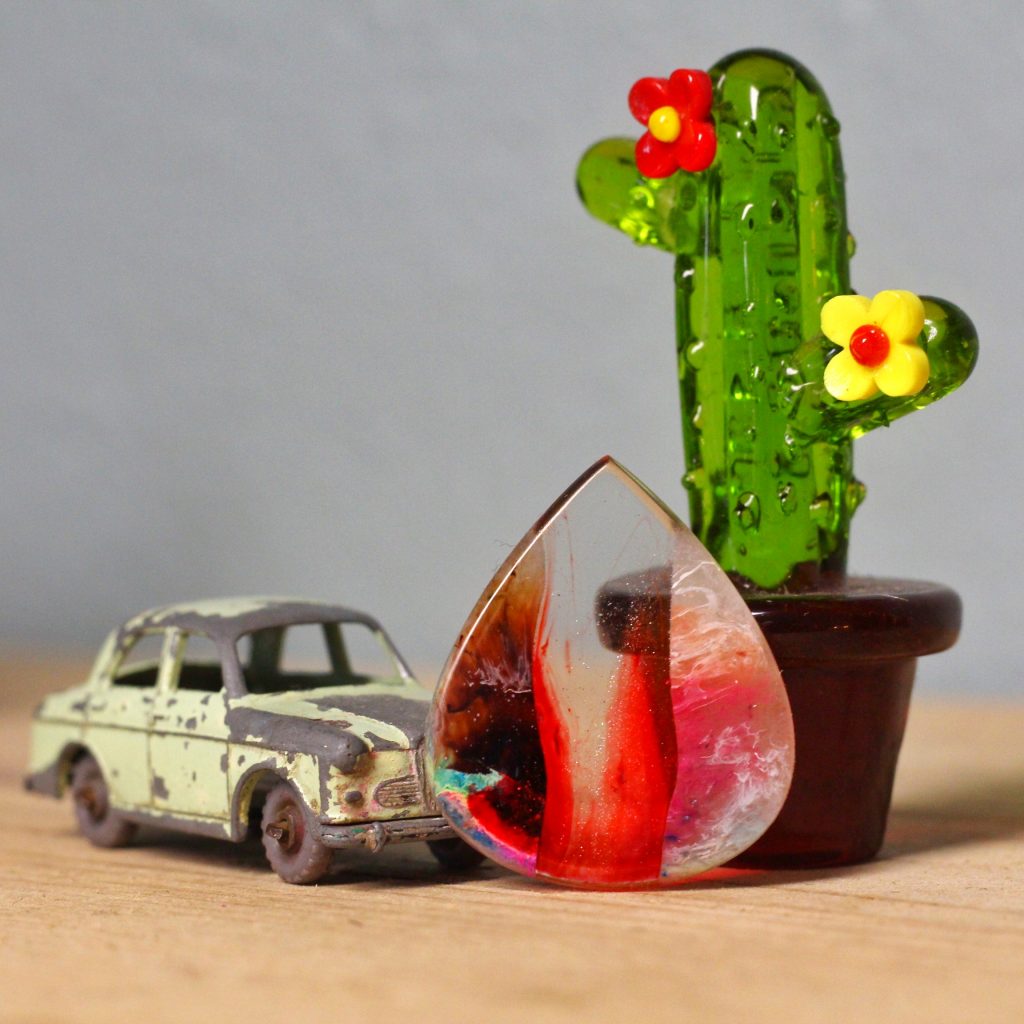 I no longer feared the darkness once I knew the phoenix in me would rise from the ashes.
— William C. Hannan

In the space of what seems like minutes, Australian plectriers Jaketto have gone from an idea to one of the most popular makers of recent times. Specialising in outrageous-looking resin, Jack and Smitty sent me a hearty example of their work to check out. Keen to see what’s got so many people hurling money at them, I’m going to wrap my hands firmly around the Phoenix.

Composition
Measuring 28.6mm wide by 33.8mm long, the 4.5mm thick Phoenix is a sizeable pick. For comparison, the Dunlop Tortex 351 is 26.2mm wide and 30.9mm long. This titan’s closest off-the-peg cousin is the 208, which is 26.8mm wide. The top of the Phoenix has a pleasing dome to it, with the bevelling coming in about 0.5mm from the tip. That doming effect continues down the sides until 1cm from the point of the pick, where a centre line emerges and becomes quite pronounced. Because of their resin use, each plectrum comes out looking it’s own way. This example has greens, whites, and that huge clear/red section in the centre, though my favourite bit is the scorched-looking piece on the right-hand side. Reminds me of toasted marshmallows for some reason.

Feel
If you’re looking at this and thinking it’s a beefy handful, you’re half-right. For the thicker plectrum user, the Phoenix’s dimensions aren’t cumbersome by any measure. There’s a gentle dip in the back of this example that acts like a small thumb groove. Picks that force the player’s hand into a certain position can be divisive, but here it’s more of a welcome suggestion than an instruction.

I’d call the size ‘reassuring’ rather than large. If you’re already on this site it’s safe to say this won’t be your first leap over the hefty fence, but if it is, don’t be afraid. The Phoenix slopes from 4.9mm at the top to 3.4mm at the tip, and this gradient means that it doesn’t feel like you’re holding a briefcase. The surface is buffed to a high sheen, but rather than feeling slick, the nature of the resin keeps it in place without being cloying.

Tone
Every material’s characteristics become pronounced the thicker they get. Resin tends towards quite a dark front end with flowing bass, as is very much the case here. There’s a seriousness to the sound – an intent that’s stately rather than joyful. While it’s not morose by any means, the Phoenix is definitely happiest when it’s delivering a more grand, weighted composition than up-stroking pop-punk. On the scale of darkness, it’s nowhere near as muted as Surfite, and less rampant than Ultem. If I were being pointed, I’d say it’s what Polycarbonate could be if it took itself seriously.

The cleans are meaty but not blown out, and while the note separation is pretty even, the tone does slant towards the mids and bass. Resin’s natural slickness was especially helpful with lower tunings and heavier gauges, so if you’re chonking about, get in.

Conclusion
I like this. It’s a fairly extreme pick on paper, but in practice, it nestles in the hand nicely, sounds good, and looks amazing. Knowing just how much goes into the making of these and how many variables there are in the material, I’m fascinated by the resulting shape. If you’re looking for a healthy-feeling plectrum with a wry, darkened tone, grab a Jaketto immediate. Bonza.

Vitals:
– 4.5mm thick
– Resin
– Made in Australia
– Better than a ham sandwich
– Cost Per Unit: around £15, numbers are very limited
– Beaut