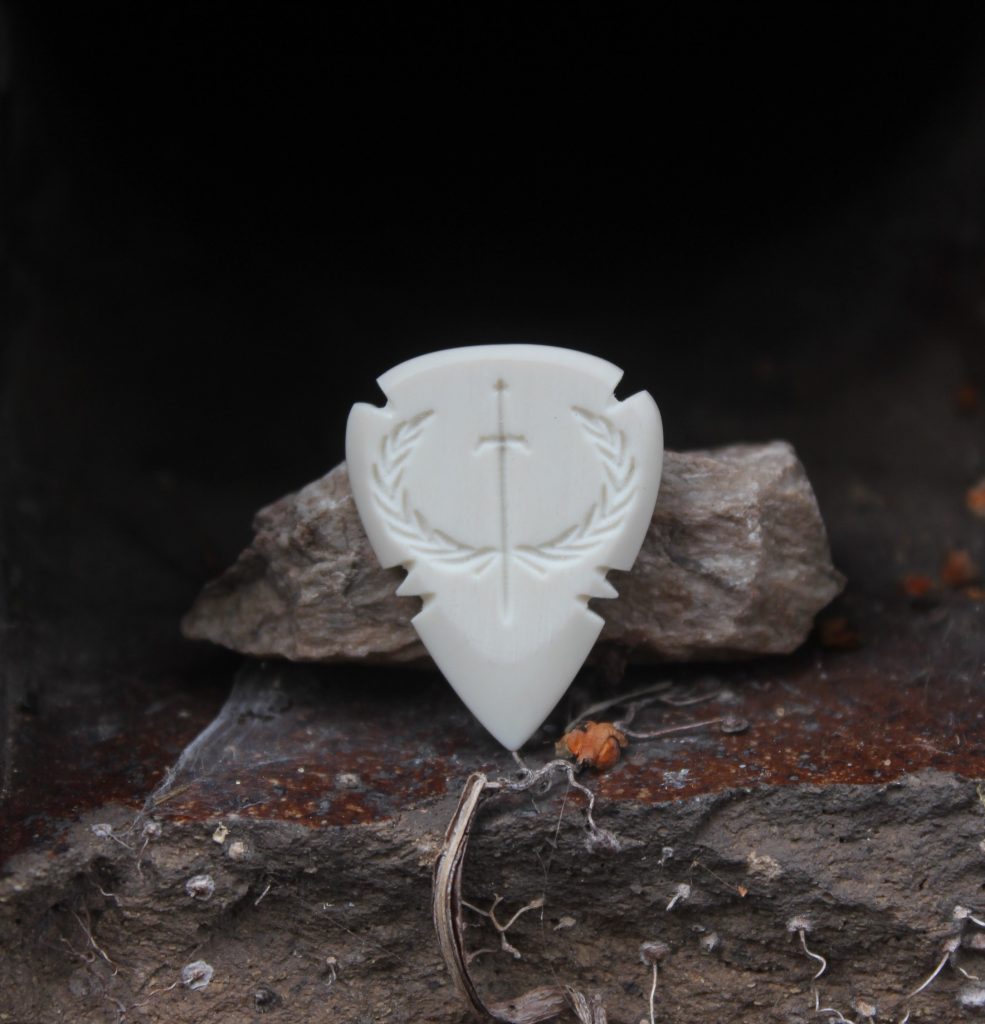 A well-aimed spear is worth three.
– Tad Williams

It’s been some time since the Rep featured the work of Alexis Radeo. The sheer volume of companies, models and developments that have made their way into the office over the last few months have made covering everyone a bit difficult. As I received a number of picks from the legio ferrata (and took the rather silky accompanying photograph) I thought I’d give the old girl the full treatment and take a closer look at the Iron Age Spearhead.

Conquer
Made from bone substitute and measuring (in this instance) 30mm long by 23mm wide, the Spearhead is finished in typically imperial fashion. This matte-finished pick doesn’t feel anywhere near to its 4mm thickness, and I found myself measuring it a number of times to make sure that was right. This is partly due to the 6 notches around its slender body, and the fact that the bevels are very long and gradual. Much is made of the aggression and pointedness of Iron Age’s flagship model on their website, and it’s clear from the moment it slid out of its silky pouch that this is a quality product.

Front Line
Keen to go hard into it, the Spearhead carries the IA sword/wreath logo on the front, with nothing on the back save the brushed, striated finish. The grip on this material is unusual – the mildest amount of heat or moisture makes it a very confident prospect in the hands, and even though I struggle with some materials because of my naturally dry fingers, this was robust.

Pokey Thing
In operation, this stabby sort is exactly as advertised – aggressive, certain, direct and fundamentally disinterested in your cloudy nonsense. The Spearhead is committed to deadly speed, and sent me on a path of spanking out every note I could get my left hand to as quickly as possible. I’m not an especially sweepy or slick player, but this thing had me tearing up all sorts of silly sequences I would never normally have attempted. It’s not as though I can’t play slowly with this, more that doing so felt like a waste of time and resources.

Be Like Water
As opposed to something like, say, the Dunlop 420, the Spearhead is the opposite of languid. Heaps of gain led me to trem picking, chord work was sudden and deadly, almost to the point of callousness. There’s very little chirp because of the sharp tip and matte finish, and the tone, while not replete with sustain, is exact and definite. I found that hybrid picking with this was truly excellent, and while grossly heated and militant, it did make me wonder how a country player might enjoy such a plectrum. Oddly enough, the cleans were great, though the Spearhead was openly pining for war.

Death King
My experience of picks this sharp is that they often drive the player to flights of hedonistic shredding or chugging aggro. The Spearhead is a little too sophisticated for that – more Alexander the Great than Genghis Khan. In A/B tests its bastard sword mentality makes the Dunlop Ultex XL sound like a zombie club and the traditional Jazz III nylon sound like a bumbling peasant. If you’re looking for a pick that will view each scar as a trophy while pounding every one of your notes into the cold earth then this is the pick for you. A worthy adversary.