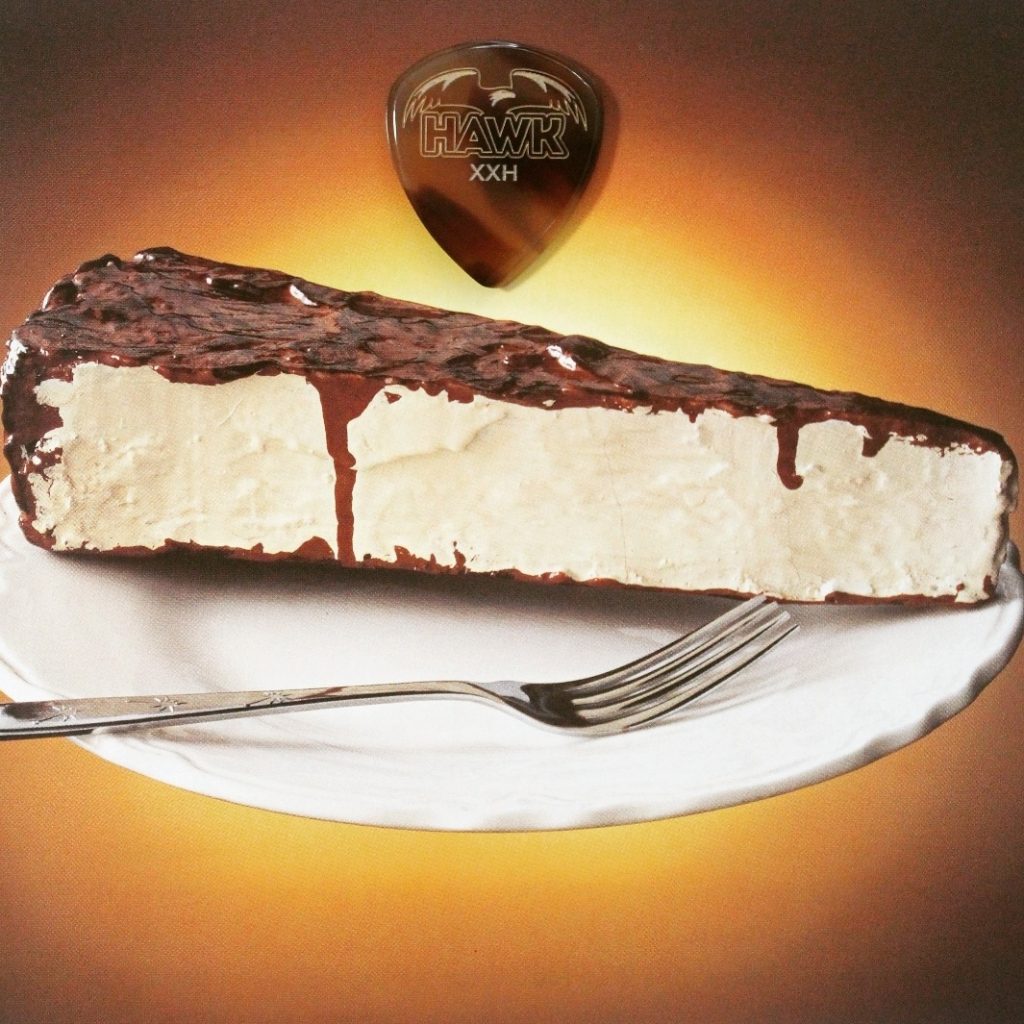 Poets have been mysteriously silent on the subject of cheese.
― G.K. Chesterton

Over the course of my journey through the Plectroverse, I’ve been presented wtih some incredible materials. Woods, plastics, bone, rocks, compressed corn somehow, recycled landfill – but cheese is right up there. Why am I mentioning this? Well, that’s because this pick is made from cheese. You heard me. If you’re in and around the community then you’ll likely know what I’m talking about, but for those of you who are still mystified by this, let me explain, as I take a look at the Hawk ToneBird III.

Measuring 31mm long and 26.75mm wide, this is the XXH version, with a thickness of 3mm. This is currently the upper limit of the Hawk output, with the range in this case floating between a pretty stiff 1.2mm all the way to its gloriously immobile maximum. You can spec what you want in regards to bevels too, so I went for right-handed bevels, as I didn’t have an example of this in my Hawk collection.

Now, the cheese thing. This Tonebird is made from Casein, which is a plastic derived from a dairy protein. Used most commonly in buttons and umbrella handles, it’s the less complex version of Galalith (which is a synthetic derived from an amalgam of casein and formaldehyde). Most often found in the gypsy jazz community, it’s extremely tough, grippy, and rather handsome, looking as it does like vintage tortoiseshell. I’d liken the grip to acrylic and kirinite, with Casein being stickier than both. The ToneBird III is ‘a curvy version of the ToneBird I‘, which is based on the traditional 351. The finishing is, as per Rob’s way, impeccable.

Slanted (or oblique) bevels are common in gypsy picks because the hand position for that style is very different. The arm is straighter, with the downforce coming from a more vertical approach than the arced or diagonal sweep of the conventional acoustic or electric player. In this instance, the shaped bevel replaces that arc, allowing the pick to move through the strings with greater ease. When I got this initially, I shall confess that I wasn’t into it – the contact with the strings felt quite different, and there was an urgency that I initially found slightly wayward. I set it aside and came back to it later on, and after spending a lot of time with the Killy Nonis Turbo and Acker – which also have slanted bevels – I picked it up again, and I understood.

As a non-gypsy player, that slant was counter-intuitive. It felt too easy, too fast. Once I let the pick do the work, especially on single notes, it was a breeze. The strange bit was the lack of impact. Tonally speaking, there’s an upbeat quality to this. Although it’ll do whatever you like, the III favoured major keys and swinging, jubilant chords. Compared to a 4.5mm Arcanum Cleric, it was less beefy but sharper, with a wider grin in its tone. I kept coming back to it, and it’s become something of a favourite. There’s poke, springiness and plenty of push to it, with a hint of the barmy urgency so in keeping with this beveling.

For a pick that I found a bit odd at first, this thing has properly won me over. Casein does chirp a lot, as with any 3mm-thick polished surface, but the sheer speed, exuberance and joy that comes from this pick is worth it. Add to that the fact that this material is pretty sturdy and you’ve got not only a worthwhile investment, but a very handsome plectrum you’ll be able to use for ages. I love this on electric, especially with heavier strings, so if you’ve got medium-dry to damp hands, get in about it.