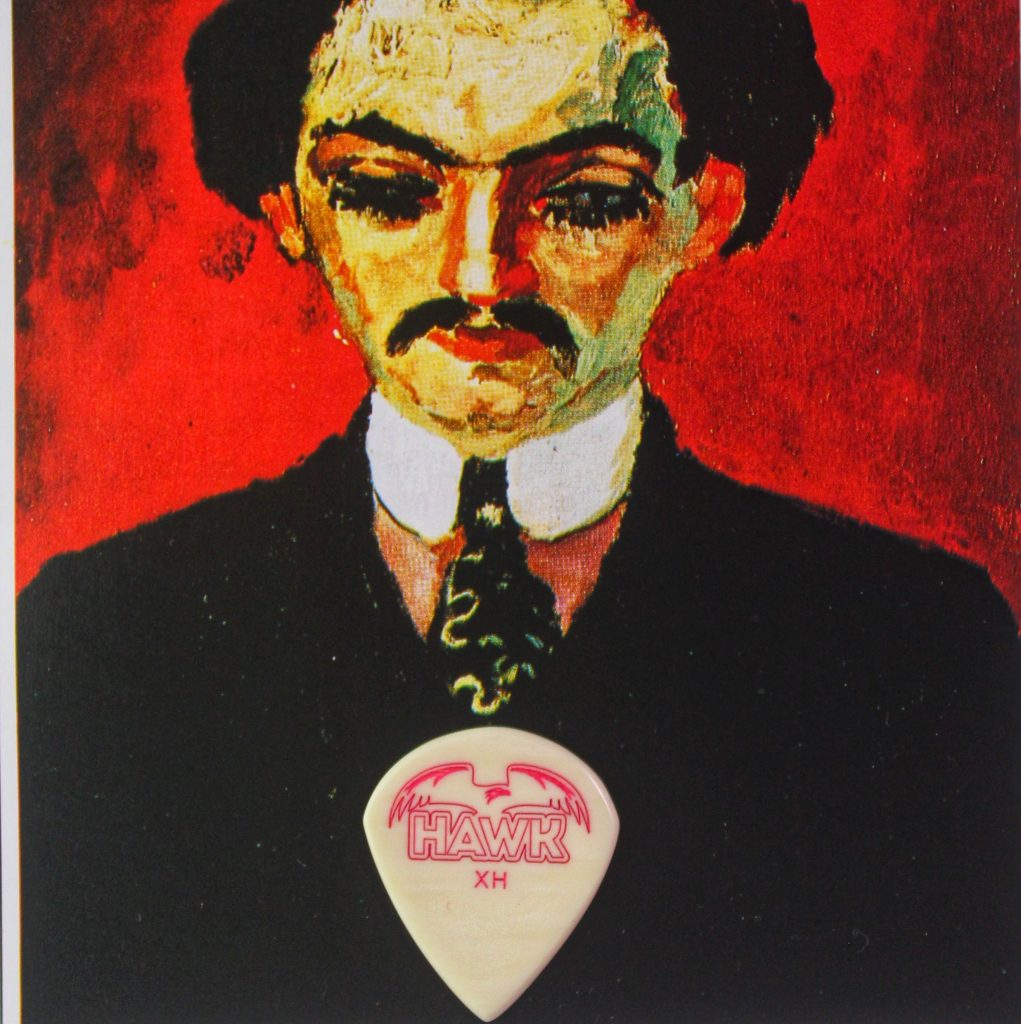 If you’re anywhere near the Plectroverse you’ll definitely know about Hawk Picks and the work that Rob’s been doing. Making stiff, handsome numbers from materials like Casein and Abalone, he’s not a man for the floppy stuff, and as I’m a big fan of picks with no give, I was thrilled when he sent me a bunch to try out. Although I’ve talked about his holey green Tonebird 6 on the YouTube, I’ve never had a chance to sit down and critique his work in depth – today, we’re going to change that.

The Tonebird 4 is openly based on the Dunlop Jazz XL, and while there are certainly similarities, Hawk’s approach, ergonomics and aesthesis are far removed from the utilitarian, injection-molded birthing process of Jim’s underrated masterpiece. It’s not the first Ivory substitute I’ve come across – Iron Age use a relative of this material for their Spearhead and Parthenon XL – but it’s one of the first I’ve tried with a gloss finish. The Hawk logo and ‘XH’ are laser-cut into the face of the pick, with the back side being blank. There are variations of course, but if you look closely you’ll see what looks like a grain in the finish, which is a charming addition. As per everything I’ve seen from Hawk, all the lines here are excellent, and when laid on top of its forebear, it conjures an image of a normal XL that’s been brushing its teeth at the gym.

So, let us discuss the Toan. On an unamplified hollowbody (my Gretsch G5420T), the 2mm Tonebird has better top end when compared directly with its 1.3mm Red Nylon counterpart. It seemed that there was more bass, but I wasn’t satisfied with the picture I was getting, so I reached for a Martin LX1E (this is important not just from an informative perspective but also because it only has a solid top). The differences in the acoustic realm were quite striking. Dunlop’s big lad acquitted itself well, but the Hawk had bell-like highs and a hefty power increase. The most noticeable change was in the sustain – the lightly dulled front end and injection-molded construction of the Dunlop gave it a slightly fumbled carry after the note was struck, whereas Rob’s wrecking ball was almost comically focused.

This was the part I couldn’t put my finger on right away – usually the power divide is obvious, with more pronounced treble or bass. Here the boutique pick was a super-composed, muscular version of the source material, while preserving the attributes that make the original so great. It’s like the pick the Ultex XL would be if it didn’t drag its knuckles all the time – the Timothy Dalton to the Ultex’s Sean Connery. The grip was pretty good, and though I’d like to see more makers putting their logos on both sides, it felt secure to the point of an almost excessive urgency. If you think about your mate that’s always half an hour early for everything, this is their pick.

If you’re reading this as a Jazz III lover and thinking ‘that lad is making some bold claims – how can this top the Jazz III?’, I’ll tell you right now that this chirps less than the Petrucci/Andy James Flow series, hits harder than the Red and Black models, and has more finesse than the Ultex. I think it’s perhaps a little aggressive for acoustic work, but in terms of chording, taut, punchy alternate picking and downright forcefulness, this is a winner. Not an especially subtle pick – it’s a little like using a scimitar to cut cheese. The biggest problem with the Tonebird is that it’ll make your Nylon Jazz feel inadequate, and although it’s £12 rather than £1.20 it’s infinitely tougher and more athletic. A serious plectrum, no messing.