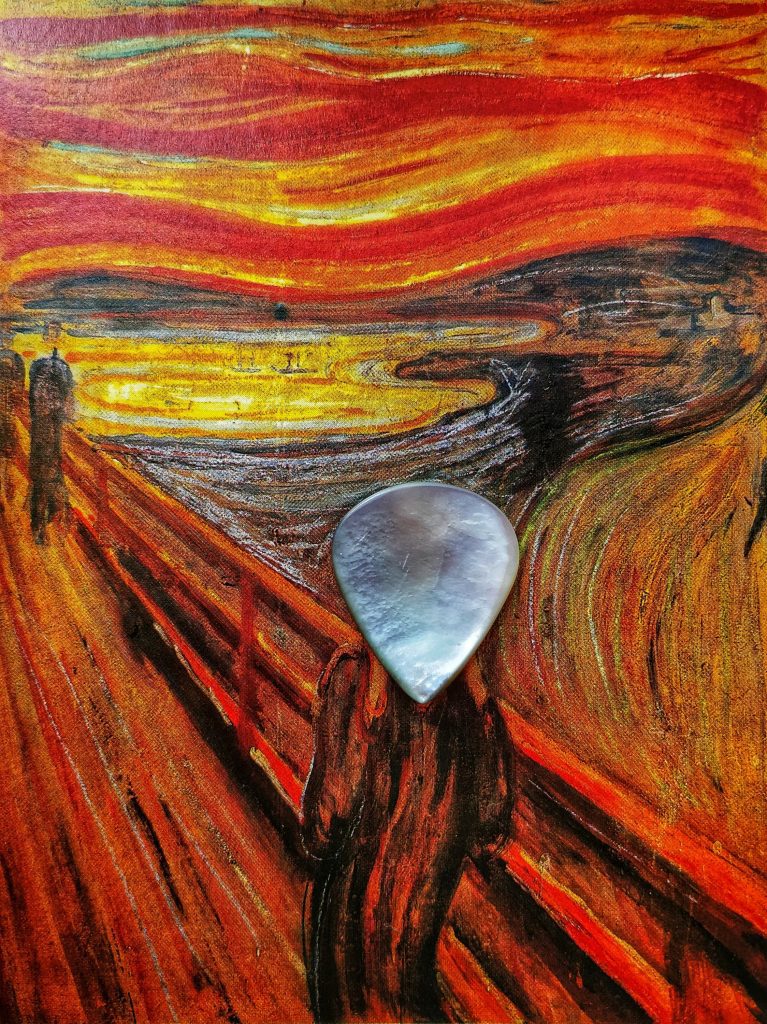 One of the greatest things about HR! has been the discoveries that I’ve had the opportunity to make in regards to my favourite topic. 6 months ago I had no idea that UHMWPE was a thing – 2 years ago I had never played a pick over 3mm, and the notion that a natural material like coconut shell or wood could be a viable, usable plectrum was completely alien. This is old news of course, and I’m now in the position to do a review like this.

This striking piece comes to me all the way from Gemstone Picks, Mexico, and was crafted by the hands of Alexis Ortiz. He kindly furnished me with a number of picks, and I’ve chosen to review this one first because it’s unique among my collection. That’s because it’s made of seashell, and like all of the natural materials I possess, it’s very far removed from plastic indeed. If you’ve never thought about a pick of this nature, stick around, because it’s a deeply curious piece.

Dimensionally, the Seashell is a millimetre longer than a Jazz III. The colour was what struck me most, and of the 5 plectrums Alexis sent over, this was the one I was most excited to try. I’m always honest with you wonderful people, and I shall say that the first thing struck me was how curved it was. I’ve no idea what type of shell this is, but I can honestly say that in this instance, I don’t mind not knowing. Here is where I divulge my only concern – and greatest curiosity – what the hell would seashell be like as a material for striking the guitar repeatedly? Would it disintegrate and shatter? Would it splinter into a billion crabs? Would anything happen at all?

All of this and more spiraled through my mind as I held the Seashell in my fingers. That first strike came with a pronounced degree of hesitation, which was hardly surprising. The terror of feeling my precious acquisition dissolve was quite genuine, and yet, it held itself in a single piece. I pressed on, and discovered that the combination of a friendly Mexican and the world’s oceans had, between them, birthed a grand old piece. Noticeably curved in one direction, it grips well. I’m not sure how I thought it would grip, but it’s very good. The bevel is a relatively mild, rounded affair, closer to a Jazz III XL Ultem than the conventional slope of a boutique plectrum, but it passes through the strings admirably, at least for single note work. Like many naturally-occurring picks that I’ve tried, the gentle curve means that downstrokes are both highly pleasing and easy, and chord work carries a degree of drag on the upstroke. If you’re playing with a considered wrist, this is completely acceptable, but if you’ve got a wild hand, you’ll be find the Seashell to be a little disquieting.

That being said, if you are heavy-handed, it’s extremely unlikely you’d abandon your PSU/Acrylic weapon for a pick that’s made of shell. A shame, because the tone of this plectrum is lively, clear and oddly graceful, carrying with it an innate joy that’s not always found in natural materials. Compared to a Jazz III and a 3mm Polycarbonate, the Gemstone was cleaner than the former and lighter than the latter, its presupposed fragile nature making it ideal for excursions into more delicate realms. In an improv context, I felt myself categorically drawn to the plain strings and the higher registers, and this pick felt at home there.

The biggest problem with the Seashell is a mental one. I can get past the curve by playing gently, but the fact that it’s made of shell does prey on my mind a bit. Granted, I doubt many people would choose a seashell plectrum for their main tool, but as it is presented thus it’s something I have to look at. The point of this pick would be, in my estimation, to be deployed like a shimmer reverb; using it all the time would be to lessen its impact, but there are a few situations where its clear, delicate tones speak more eloquently than plectrums of other materials would. For all this, it’s one of the most engaging picks I’ve used in recent times, and despite the manifest impracticality, I’d advise anyone with a Big Sky to give it a go. If you favour your guitar’s middle position and lots of delay, get one of these – you won’t be disappointed.