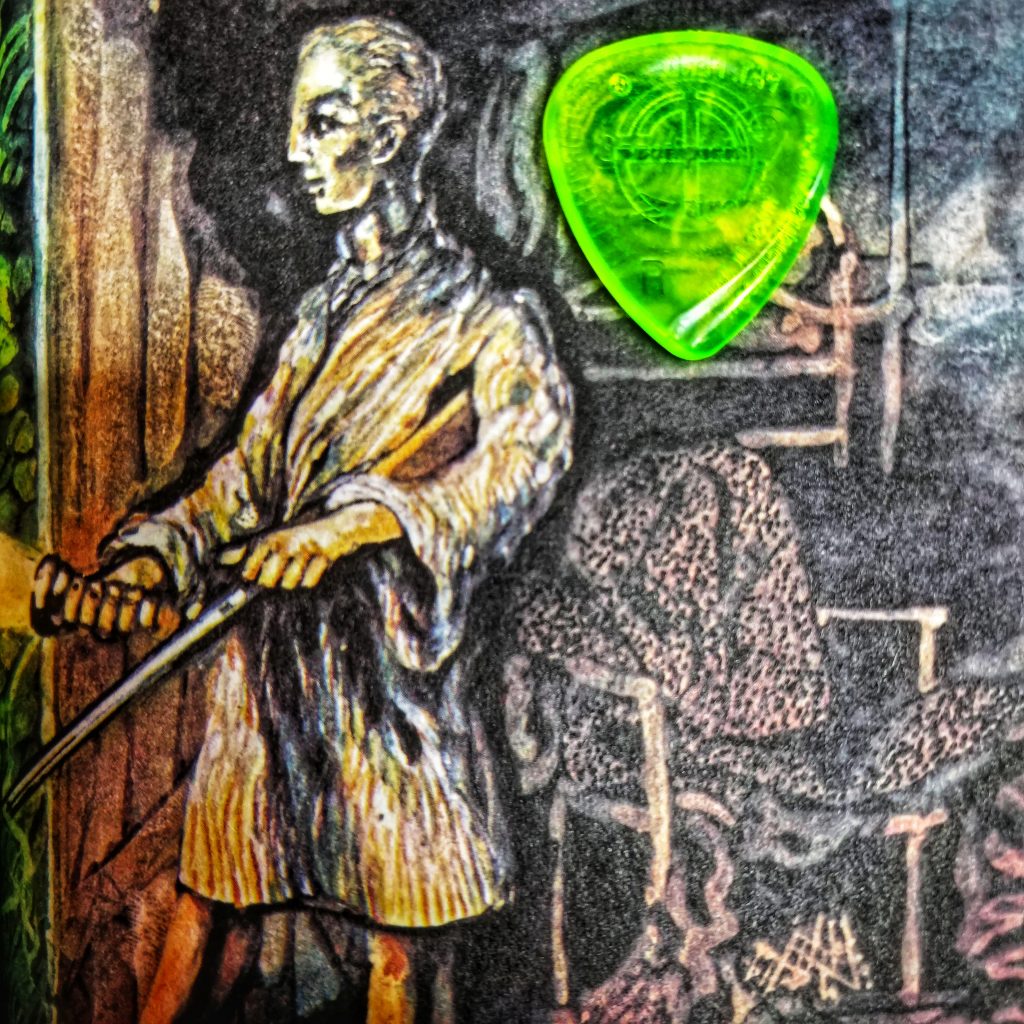 This calls for a very special blend of psychology and extreme violence.

I get to handle some pretty exotic stuff while I’m reviewing, and some picks come to me from very diverse sources. This particular review came as a result of having a conversation with everyone’s favourite shredding granny-cat-mother Mrs. Smith. One of her videos showed that the plectrums she was using were pretty dense, and being interested in such things, I asked what they were. To my surprise, I got a message back from the lady herself, advising me that the picks in question were made by Esseti. I hit up Mr. Esseti to find out about shipping to the UK, and before I knew where I was a whole load of them showed up at the Rep. Join me today as I cast a wary eye over the neon green Ziriyab Fluo.

Weapon Of Choice
Coming in at 3.2mm thick, the Fluo is 29.5mm long and 26.5mm across, which puts it in Jazz XL territory. This example is made from Methacrylate, which is found in windscreen repair kits and bone cement. Esseti really goes for the left/right-handed bevels in a big way, and I didn’t receive a single plectrum from him that wasn’t sloped for right-handed use. Like all the picks I got, the Fluo is injection molded, and aside from the conventional tang on the top, well-finished. There’s a lot of detail in these picks, something that I would perhaps take for granted in a hand-made plectrum. It really stands out here, partly because despite the fact that it has the full website address, the legend ‘made in Italy’, the Esseti logo twice, ‘PAT. PEND’, a US Parts number in full, the name of the pick and an R for right handed on it, none of these are cut in such a way as to be intrusive or, as it happens, take you away from the fervent hacking you’ll be doing with this plectrum.

Anatomy Of The Sword
I haven’t consciously come across this material before, and while Methacrylates are a wide family, I will say that it’s pleasingly sticky when it needs to be. Even the most slender Esseti models have a gentle recess in the face and rear to aid your gripping – an extra detail that I appreciate a great deal. The ridges of this example are neatly rounded, but the very tip is slightly more pronounced – not poking out, just a little sharper. Going even further, there’s a mix of matte-finish and polishing here, with the striking parts being polished while the non-debossed part of the surface is textured. It’s worth noting that this approach permeates the entire range as far as I can see, though the hand-made stuff mainly sports the logo without all the extra detailing.

Mortal Combat
The Fluo is a lot of fun, in the same way that a dog that’s a bit mad is fun. Though beveling of this kind can often soften the attack of a material like Ultex, I can’t even imagine how brutal Methacrylate would be if this is it dialled down. On an acoustic, I pitched the Fluo against an Arcanum Cleric (4.2mm), a Hell Super Black (3mm) and the Hawk ToneBird III in with right-handed bevels (3mm). As predicted, it was brighter than the Super Black and louder than the Cleric, with the closest comparison being the ToneBird, though the Fluo doesn’t have the same composure. It’s like a hatchback with a massive engine – you get in to drive to the shops but it’s burning rubber, squealing tyres and people scattering out of the road ahead of you.

The Madness Of King George
There’s much more power than I expected. The Fluo has an explosive, slightly wayward quality to it, which I found to be highly enjoyable. Tonally it’s very bright at the top end without being shrill, and there’s huge power in the mids, with a tight bass. It’s not as full-fat or mature-sounding as the Hawk, but it’s worth remembering that a pack of 6 Fluos is £24, and a single Hawk is £15. Not to mention that it’s insanely powerful for an injection molded plectrum. This is a stir-crazy monster, powered by rage and infinite fury. Ironically I found that it was especially good at bringing some real, palpable tension to the acoustic. On electric, the rhythm work I could achieve took on a similar zeal. Attempting softer work felt a bit wrong – like taking a body-painted football fan to a golf match.

Pistols At The Ready
If you’re a rhythm player looking to take the kneecaps off the rest of your band with your bladed chord work, this is the pick for you. It’s not a scythe or a foil, more like the ragged sawn-off of a desperate survivor. Should any of the language used to describe this plectrum feel engaging or diverting to you, get yourself one of these – you won’t be disappointed.