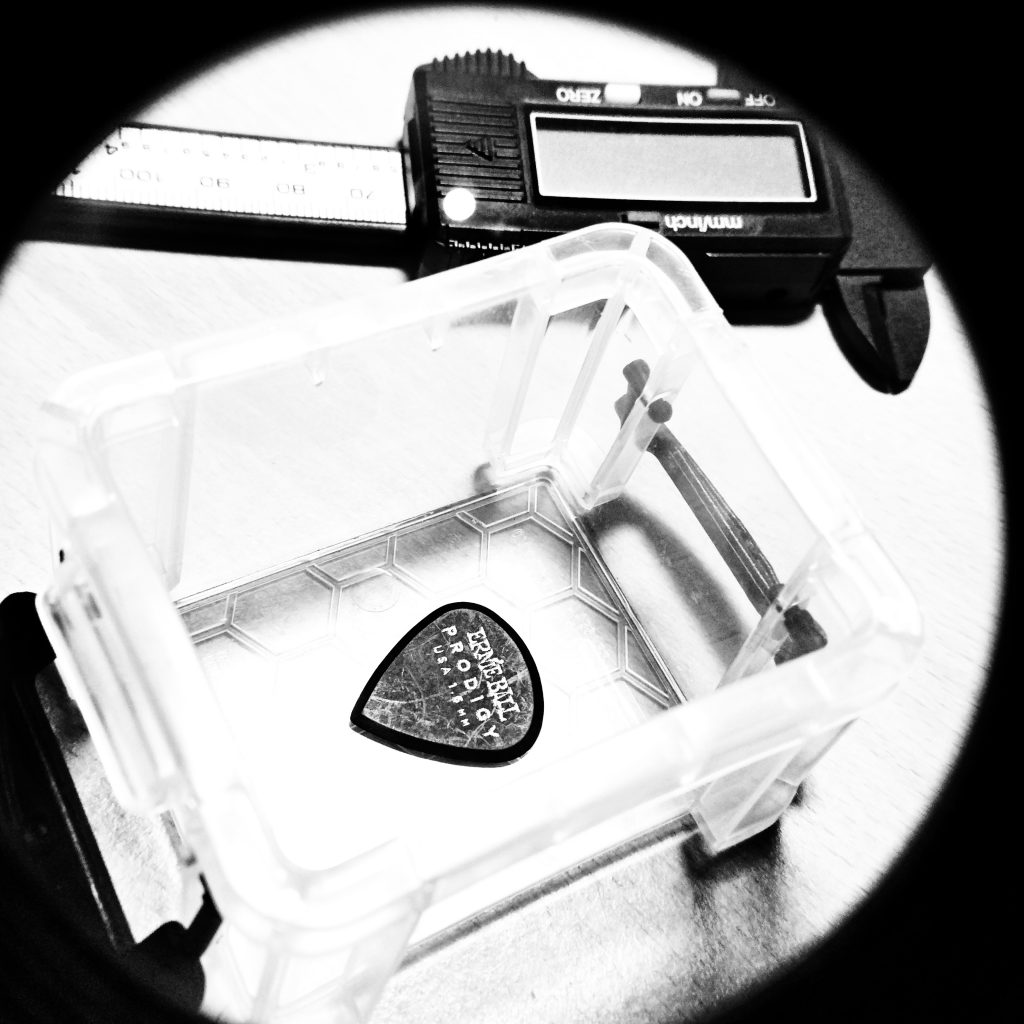 Let’s get this out up top – the Prodigy Mini 1.5mm is Ernie’s version of the Jazz III. There’s nothing wrong with that – the Jazz III is one of the most imitated picks in history, and with good reason – I’ve even done a whole article talking about it, calling it the Little King. It’s especially favoured in the rock and metal community, and while it’s chiefly championed in its Red nylon format, all the versions of it (Black Stiffo, Ultex, Petrucci, Johnson etc) have all been successful. These, then, are lofty heights for which to aim, particularly with Dunlop now offering a Delrin Jazz III of their own, but as many of you requested this review, let’s do it.

With such an obvious template against which to measure it, let’s talk dimensions. The Prodigy Mini is smaller than a Jazz III, 24.4mm against 25.2mm in length and 21.5mm to 21.9mm at the shoulders. The Mini is thicker at 1.5mm, with the bevels being much more significant – the tip is also noticeably sharper, and as the whole pick is made from Delrin instead of Nylon it’ll last a lot longer than its Nylon rival.

I will say that the grip is pretty good – it’s Delrin after all, and the Mini moves through the strings with relative ease. Compared to its peers, Ernie’s dinky plinker is more pointed and aggressive in its tone than the categorically dull Tortex Jazz III (the Blackout 1.35mm in case you’re wondering), and less full-bodied than the Stiffo version of the Little King. Trying them out back-to-back on acoustic, I was very surprised that at the results – I was sure the Prodigy would be brighter because of the tip and bevels, or at least closer to the behaviour of the Nylon. I was quite wrong, and while I fully acknowledge that they’re different materials, it was the extra body of the Stiffo that was the most evident aspect.

I’m going to put all my cards on the table. I’m not a fan of the Jazz III. I completely understand its place in the Plexicon, and only a braying jackass would say it’s a bad pick – it’s just too small for me, which is why the Jazz XL is such a cracker. Tonal shortcomings aside, this is my biggest problem with the Prodigy – it’s too small. When you’re talking about a universe where everything is measured in 1/10ths of millimetres, the extra length of the Dunlop really does make an enormous difference. It felt like I couldn’t get comfortable with it, and going back to its contemporaries was like returning to the land of the giants.

So a disaster then? Not at all. Like Lazarus, the Prodigy had a trick up its sleeve. Out of curiosity, I thought I’d try it on my dulcimer, and lone behold it wiped the floor with the other two picks. On guitar, it sounded like a lost lamb, lacking the poise and maturity of its contemporaries. On the much smaller, thin-stringed dulcimer, it took on the persona of a wry court jester, full of spritely charm and mischief. I was tearing about on that thing, and to my utter amazement the Dunlops were nowhere in sight. Given how similarly-toned plectrums have behaved on other instruments, I’m going to stick my neck out and state that if you’re a mandolin or indeed a dulcimer player, this is a very serious piece. This put me in a bit of a position, because while I’d have real difficulty recommending the Prodigy for guitar, it shone so brightly here that I’m going to eat part of my hat. Not the whole thing – just the brim.

Ernie Ball make a few versions of this now in all the normal shapes (351/346 etc) with the same bevel, which I’ll try and get my hands on. I stand by everything I said about the Prodigy Mini on guitar – it’s a shrill, wayward imitation of a world-beating plectrum – on smaller folk instruments (of which there are millions worldwide, let’s not forget), it’s a monster, a charming, spiritually-charged and incisive tool. I’ll see how the other models in the range perform, because now there’s more at stake. A serendipitous effect to be sure – if I hadn’t tried an instrument other than guitar this would be a different tale. Well played, Prodigy, well played.