When a crow says an intelligent thing, chickens may laugh at it. This is the laughing of the sand castles at the powerful waves!

It’s been thrilling to watch certain makers grow in the community since HR! began. One of those makers is Crow’s Customs, the wood-centric hand-crafting magician who’s responsible for one of my most-used picks in recent times. Today we’re going to look at the brand new, fresh-faced version of the plectrum that’s taken a massive hammering since the day I got it, the effortlessly handsome Orru.

Dimensions
Measuring 22.5mm wide by 27.5mm long, the 6.7mm thick Orru is a 3-piece suite of Poplar Burl and that ever-pleasing material, Tagua. Sitting between a Jazz III and XL in size, its pointed tip and rounded shoulders make it less broad than the prototype incarnation I received back when the model was only half-named. The two pieces of wood that Mr. Crow has chosen to sandwich his Tagua between are magnificent, with scorched-looking burls and fingerprint-type grains. Buff in its own right, the Tagua here is 3mm thick, a pleasingly-dense cut for this material.

Presentation
Liam does tend to favour a sharper tip, and this spikey piece is no exception. The prototype Orru I received also had a pronounced end, though the pick itself was was only 4.9mm thick with a 2mm core. Our English chum has finished the striking Tagua section with as graceful a sheen as one can have while still being able to call that surface matte. I love seeing Tagua buffed-up like this, and although there’s more chirp than textured Tagua (a la Howling Monkey), the sensation through the strings is excellent.

Tones
Tone-wise, I was expecting this more recent version of the Orru to be brighter with a touch more bass than the previous version. It’s definitely more pronounced in the top end, and the bass is less heavy. Those of you who’ve got any experience with needle-sharp picks will note that this feeling tends to dissipate after bouts of serious playing – I’d surmise that the more the tip shapes to your personal approach, the more full-bodied the sound will become. Like all Crow’s Customs picks, it’s very good-natured and quite cheery sounding, so sliding into my normal grim-faced, dramatic playing felt unwarranted. Single note work popped-out beautifully, and hybrid picking especially was a pleasure.

Bonus Round
On acoustic, this was a very rewarding experience. My octave mandola loved it, and major key work sounded even more major-y than normal. Electrically, it made me want to play a lot of wise-cracking, cheeky lines, and the depth of push afforded by the combination of resonant materials, a thick body and a pointed tip meant layering in an ambient context was a joyous experience.

The Woodening
Let’s talk about the elephant in the room – the wood. I’m not a particularly delicate player in a band setting, and I play a lot of baritone. Baritone = big strings, and you’d think that pummelling a pick like this would wear away the wood significantly. After months of serious battering, the wood portion of my previous Orru has receded around 1mm from its original position. The Tagua itself has worn to the shape of my approach, and what was once a bright, jolly sound is a bit more Brandon Lee than Brandon Boyd. This is a great thing – like a solid wood acoustic, the materials here adapt to you, and unless you’ve got the driest of dry hands, you should grip the wood part no bother.

Conclusion
As discussed in my upcoming article The Burden Of Beauty, buying a pick like this and seeing it tarnish can cause much distress, until you realise it’s a tool. Amongst the thousands of picks that come through the office, it’s rare that I punish any of them quite as hard as I do these. If you’re looking for a thick boy that’ll do acoustic and electric with a smile, get one of these. P’caw.

Follow Liam on the socials @crows.customs, and find his works at the HR! shop! 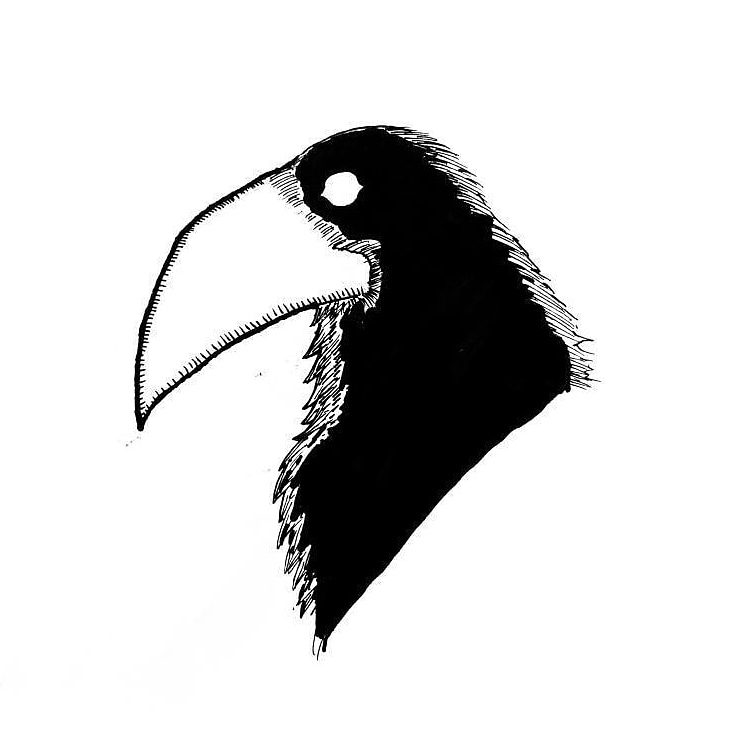 Crow’s Customs is a one man job, founded in 2019. Buy their picks from the Heavy Repping! shop ...