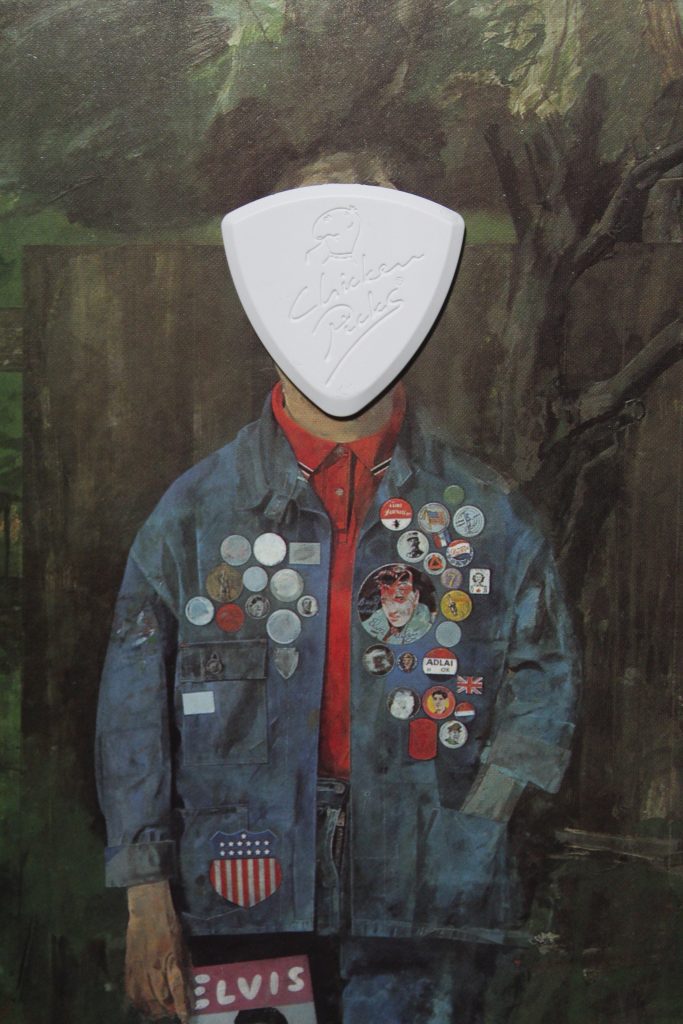 “The sky is falling.”
– Chicken Little

It’s been quite a year already, as they say, and despite reports of a raging virus, political unrest, social upheaval and galaxies going dark, the Plectroverse is alive and well. One of the big names in our hallowed community is that of Chicken Picks, the company started by Eppo Franken to provide his favourite kind of pick sound, and it is with some joy that I report a new model from their clucking stable. Farm-fresh from the NAMM show, Chicken Picks had two new models to show, the fanciest of which is this – the Bermuda XL.

Let’s get right to it here. The XL is not a new shape, but it is a giant version of my favourite Chicken, the Bermuda III. It’s been touted as The Bass Pick, and before you go breaking your spaghetti, playing bass with a pick doesn’t make you any less of a player. A lack of timing, listening and humility makes you less of a player, and those 4-stringers chopping away with a plectrum can rest easy, safe in the knowledge that only the most childish detractor would call another musician out for this least punishable of actions.

Currently available in 2.1mm thickness, the matte-finish thermoplastic XL is the largest of anything that Eppo’s company has produced, and seated next to its forbears it looks positively huge. I’d liken it to the difference between the Jazz III and the 351 rather than the III and Dunlop XL, and it’s definitely a different feeling in the hands. I’ve got one of everything that CP make, and this is the most swaggering, most positive sounding of them all. Eppo’s picks never carry a negative vibe as far as I’m concerned, and even playing darker music, this blanched behemoth made me feel more jubilant. The bigger shape sits very well, and I’d say that anyone familiar with the tri-cornered classic that is the 346 will find much to like here.

That being said, comparing this to a conventional celluloid or Delrin 346 would be like comparing a slice of bread to a sandwich. Rather than simply offering three identical corners, the Bermuda has two pointed tips and a rounded one, with enough disparity between them to make significant tonal differences. In keeping with the nature of Chicken Picks’ other offerings, there’s a breathy, silken quality to the striking tone, coupled with an unusual amount of pop for such a shape. I’d always found conventional 346’s a bit on the blunt or floppy side, and to have two potent points and one more blunt arrangement makes for not only a more present, immediate sound, but more control on top. One thing that’s evident here is something not present in the rest of the range – sass. There’s a cocky lilt to the XL that’s more Bermuda shorts than Bermuda triangle, and I found myself playing groovy, muscular lines with it a couple of notes in. The natural dryness of the material lent itself to such conduct, and coupled with the flats on my bass I was thumping out Jurassic 5 lines in no time.

Let’s look at it from two angles then – on bass, this is a poppy, pokey sound with minimal drag and plenty of sass. On guitar, I found it graceful in a wink-wink sort of way, like pairing a cocktail dress with trainers. It nestles in the crook of my index finger very well, and feels proper and secure. I’ve been hammering the same CP Bermuda III 2.7mm for the last couple of years with so significant wear signs, and given reports from other parts of the otherwise fickle and hard-to-please internet, the wear seems to be universally tough, unless you’re really, really hammering it. It might be a little large for some players, but if you’re looking for a well-behaved if slightly cheeky hard-wearing pick, look no further than the Bermuda XL. Nice.