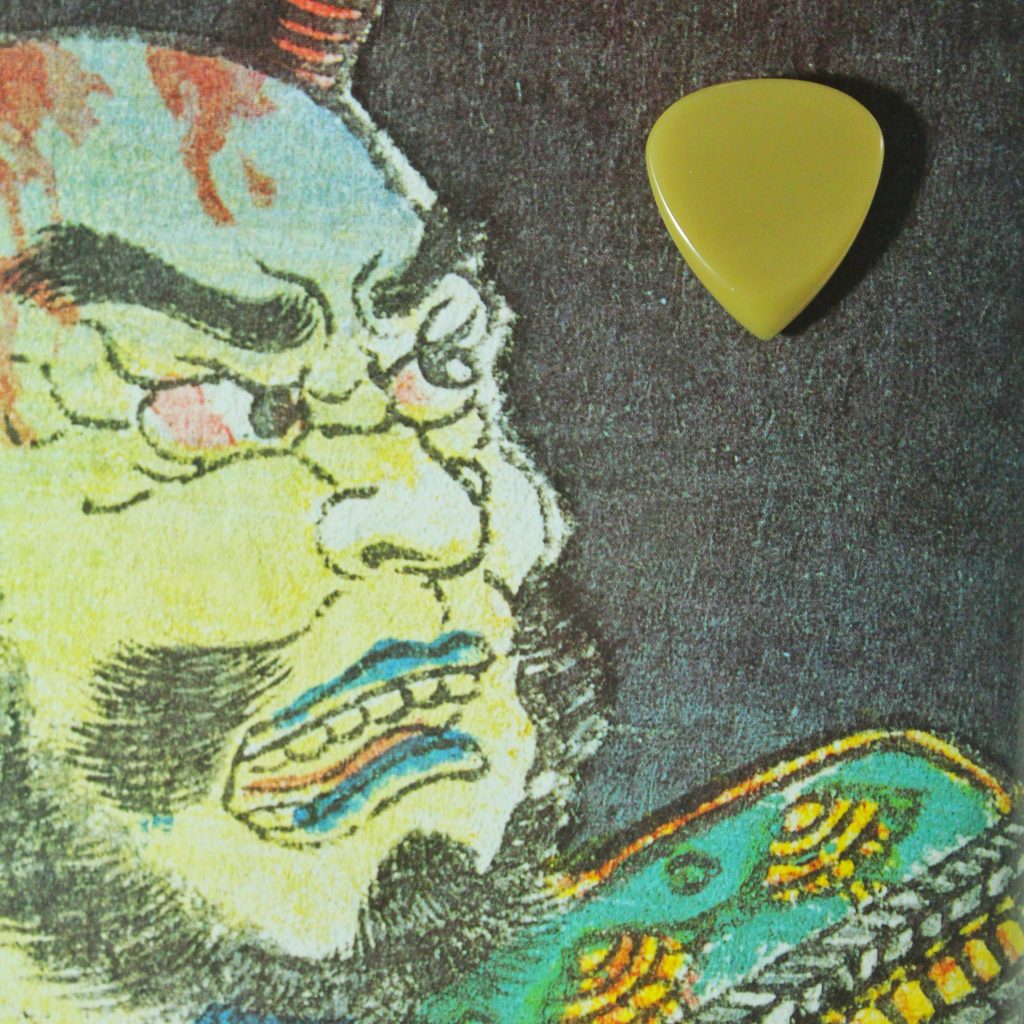 Game Of Thrones was quite the thing. Whether or not you watched it, it’s been a fiscal success at the very least, and the furore surrounding it has been equally pronounced. In keeping with the drama of the show, I’ve decided to cast my eye over one of the fastest, most relentless picks in my collection, the BHL Hodor. Made by one Brock Little – whom you can read an interview with here – the Hodor is a hefty hammer, and if you’re a guitarist who likes the fast lane, do yourself a favour and read on.

Operating out of Hong Kong, Mr. Little deals primarily in extreme picks – whether that’s in thickness or materials, nothing about the BHL gear is wishy-washy. My experiences so far have comprised the grip-beyond-reason of the Exultem and the unyielding stiffness of the Megalodon, but the Hodor is something else. Crafted from PSU and 5.6mm deep at its thickest point, it’s not a floppy acoustic strummer, nor is it intended to be. By the time this came into my possession I had played picks of 9mm and up, so the beef didn’t bother me, and in truth, if you’ve been interested in heavier picks and aren’t sure where to start, this is a good spot.

A plain plectrum at first glance, there’s a great deal more going on than you’d imagine, and our chunky pal hides much subtlety. The gripping surface is finely brushed to give a matte-ish texture, while the outer edges are polished to an almost hilarious degree. Though this is common practice with materials like acrylic, seeing it done with this infinitely harder substance lends the Hodor a curiously purposeful air. The faces are meant for holding, and the edges for striking – there’s no ambiguity, and though this is by no means a wallflower thanks to its imposing girth, the absence of any visual flashiness meant that I wasn’t thinking about how cool it looked – I was there to merc riffs.

It’s a great feeling, if a little odd at first. This is because the Hodor isn’t a flat surface – there’s a very slight concave to one side, resulting in an overhang onto the other side of the plectrum. Clearly designed to encourage grip and to work with the contours of your thumb and finger, I found that it worked both ways round, though I did prefer the curve going towards my thumb. I’ve seen this shaping on some of Brock’s other work, and it’s testament to the obvious time taken in development that it’s been realised so well. When you get your hands on one of these that feeling might be something you’re conscious of, but once you’re 20 minutes deep in the most physically relaxing jam of your life you’ll wonder why you didn’t get it sooner.

All that being said, let’s talk Toan. It might come as a shock that this pick is tonally not an exploding warhead. The almost impossible slickness means that getting a chonking, dj0nting rattle on the go is harder than you might think, but if I might venture, there’s more to thick plectrums than just shredding and distorted barbarism. The Hodor is weirdly languid, and remains one of the most wrist-friendly picks I own. Certainly, the scope for tearing about at demented speeds is more than present and the power is quite significant, but I found it led me to a more grandiose, fluid place than I thought it might. As that’s my thing, I was pleased. It wouldn’t be my first choice for jazz as it’s a little too pokey at the front for that, but for the adventurous country picker or late-hours bluesist I can see the Hodor having plenty of appeal. Playing a lot of eastern-influenced material, I loved its supple potency – like the belly of the dancer, one might say. Were I to be extra dramatic, it’s a bit like Rick in Casablanca, if Bogart chirped a lot because of his polished thickness.

That’s the only complaint really – all picks I’ve come across at this thickness and level of polish chirp like budgies being tortured for information, and it’s either something that bothers you or it’s not. In the heat of battle it’s a difficult thing to discern, but if you’re not used to big plectrums you’ll likely notice it acutely. I’m not sure if the Hodor was designed with a specific purpose – it comes in three materials (UHMWPE/Ultem/PSU) and has a broad, sharpened tip – and it’s possessed of a knowing, learned sound. I wouldn’t call it serious necessarily – contented would probably be closer. It’s at peace with itself, and rewards the player for taking their time, like Speedy Gonzalez in Mr. Miagi’s body. Serene.