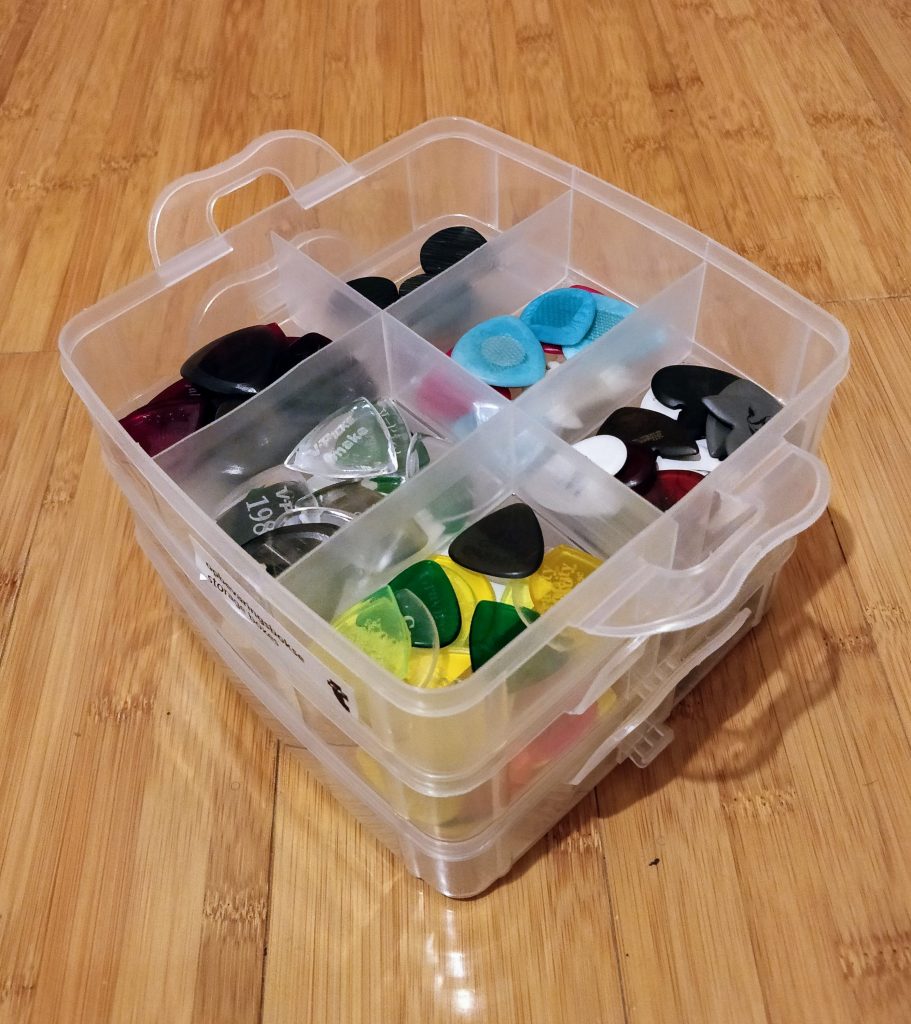 Heavy Repping! began in earnest with its first post on the 14th of October 2018. This was before the Wall Of Builders, before the YouTube channel, and technically before I had any presence on Instagram. The whole idea hadn’t really been thought out yet – I really loved picks and wanted to write about them, and HR! was my outlet, whether anyone read it or not.

Since then, I’ve spoken to and interviewed some of the biggest names in picks,  posted 24 videos to YouTube, been sent everything from hand-carved custom plectrums to unmarked prototypes and begun to understand the extent of this beautiful community. I’ve played picks as thin as 0.3mm and as thick as 13mm, received plectrums from builders in Canada, France, Italy, Australia, England, Holland, Russia,  Colombia, Mexico, Switzerland, Germany, China, Japan, the US and Iran, amassed a collection of just over 600 picks, and met some truly excellent, very kind people the world over. But what have I learned?

Well, for one thing, I’ve learned that a lot of guitarists know cock-all about picks. Far from an indictment, this is chiefly because picks aren’t something that guitarists have spoken of all that much until the last 5 years particularly, and although companies like V-Picks and Chicken Picks have been going since the ’80s, it’s really only in the last few years that anyone’s even taken an interest. The death of Jim Dunlop and some recent articles have helped to bring the focus back to plectrums and their importance, but most guitarists, when asked, either deride the idea of paying more than a few pence for plectrums, or simply aren’t aware that the options exist.

I don’t, and will never, hold anyone to account for not knowing. Even I didn’t know how deep this community went when I started the blog last year. It’s one thing to love something, but it’s another entirely to study and try and understand it, and it wasn’t until I was advised about Joe Macey by Jeff White from Plectrum Spectrum that I really got an idea of how much I didn’t know. This meant reading more articles, tracking down old catalogues, and finally getting a copy of Will Hoover’s PICKS! book, which was the day I realised I truly did care for this subject matter very, very much.

What’s been really eye-opening is how the community of pick makers have taken to it. I was really surprised by responses I received from the likes of Monster Grips and Stone Age, the discourse I had with Xufoy and Savage Customs, how informative builders like BHL were, and how open people were to fielding my relentless (and occasionally very late) questions. It would be impossible for to thank the community enough for their ongoing understanding, so I’ll continue the best way I can, by making a channel and blog that serves everyone as honestly and efficiently as possible.

Apart from that one instance where I was very unkind about the Dunlop 0.46mm Nylon, I’ve tried my absolute hardest not to be negative about people’s creations. This is a very hard world, and much like in the case of guitars/pedals, I don’t believe that there’s one plectrum that rules every player, so even if I don’t get one with something at all, trashing it would be pointless. Rather, I’ve endeavoured to give you, the reader, as much information as I can that would be useful to you, on the understanding that by doing this, you can make as informed a decision as possible in a field that’s more tactile than any other.

As I go forward to the next 100 posts, I’m doing more interviews with makers, starting to talk to collectors as well as artists, and planning how to take HR! to the next level of its evolution. In time, I hope that this will be the front page for plectrums on the internet, and that whatever sort of pick you need, you’ll be able to find it here.

I extend the most heartfelt of thanks to you, the reader, who keep checking out the page even when there’s nothing for a couple of days. Trust me when I say I could write about this all day every day and never get bored, and perhaps one day, I will.

Remember, if you don’t know what to do – Rep Hard, Rep Heavy.

Sincere thanks go to Mike at Odessa for building the Stick, Andy at Break The Machine for his advice and for gifting me the Heavy Repping! logo, Cruz at Woodland Cast for the HR picks, Matt at Stone Age for the chat and for showing me as-yet undiscovered builders, Exeter Library for giving me a place to work, Malte at Xufoy for his mad designs, Nick at Gem for his kindness, Immortal Instrument for the amazing box, Pete at Swiss, Alexis at Iron Age, Brian at Howling Monkey, Roopam Garg, Connor Kaminski, Ruvane at OCGP, Andrew at Monster Grips, Carlos at Rombo, Vinni at V-Picks, Eppo at Chicken Picks and Tom at Winspear for their interviews, Plectro for their insane 3D corn build, Sergio at Plexstrum for the prototypes, John at Superbite for the whole damn collection, Patrick at Hufschmid for the masks, Norman at Gypsyguitar.de for the Miller, David at Tantris for the most lethal plectrum ever made, Jerry at Rock Hard for the Stealth, Terence at Piglet for the roster, Nadz for the Japanese haul, Alejandro at Dasotomic for his unbelievable extras, Riki for the pick with the moustache and the giant camo, Pablo at Pleks for the crazy Delrin trio, Jay and First Line for the Gravitys, Dugain for the righteous jazz action, Mathas for the holy shredding, Tree for the boss wood, and Andrius R for the lightning. Anyone I’ve missed, I’m extremely sorry, but you are also extremely great!