Plectrography – 5 German Makers You Should Know 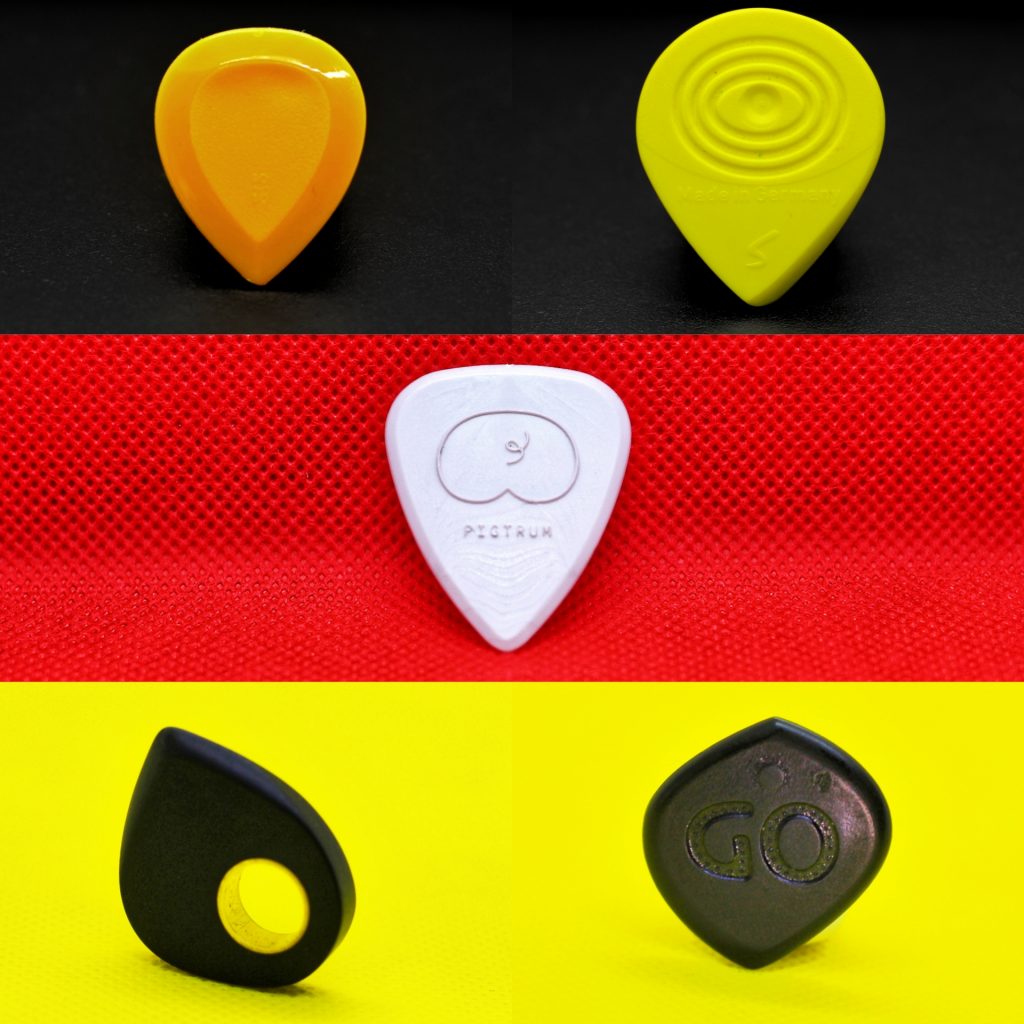 Wo Sind Meine Plektren?
The musical instrument landscape has been dominated, at least in my lifetime, by the Americans and the Japanese. Ubiquitous brands like Martin, Ibanez, Fender, Taylor and Gibson are first to enter the mind when we think of wood and wire, which is understandable given their global proliferation.

However, the Plectroverse is infinitely more decentralized. Given the relative youth of the modern landscape, I thought we should take a look at places that aren’t America, and see what incredible pieces we can find elsewhere. The US will get its own article, but today, let’s take a wander through Germany.

Die Ferne Vergangenheit
Historically, the Germans made some fine picks. Companies like Gotz date all the way back to the 1800’s, with makers like GEWA, Herdim, Hopf, Weisbart, Blitz, Lark and Fitzroy operating in the early 20th century. Though materials like celluloid were indeed quite popular, Casein, Galalith and hardened rubber were also common. The traditional dominance of the Mandolin-style pick was also less pronounced, with shapes that would not look out of place today proliferating.

The present era tells a very different story. Modern Germany is intensely focused on recycling, functional design and the place of art in everyday life, and their plectriers reflect that. Here are 5 makers you should know. Investigate immediate!

Militantly eco and all the more fabulous for it, Tibor’s Pigtrum has been an exciting company to watch develop. I’ve been keeping in touch with the Gaudiopolis guitarist since his earliest days, and have been thrilled to see the Pigtrum roster deepen to include two new materials and models in recent times.

Staying true to the premise that his picks would be as ecologically-sound as possible, Tibor maintains a plant-based line. The Butt has been joined by the Wrazze III and Troink, covering the classics of the 351, Jazz III and 346, and Pigtrum boasts some of the neatest, functional packaging you’ll see in the game. Showing that plant-based polymers can be injection-moulded with a high quality finish is not a bad accolade either.

The open, natural sound isn’t something that’s common amongst injection-moulded picks. Those players looking to wrench more power and clarity out of their acoustics especially would do well to check out the Butt, and bass-centred pickers should have a minimum of all the Troinks. Schnell!

Rombo
Defiantly modern, Rombo have nudged their designs into the mainstream with two successful Kickstarters and some of the tightest photography you’ll see in the community.

Carlos and Judith operate out of Stuttgart, with two distinctly different lines of picks. The coloured shapes of the Wave, Diamond, Origami and Classic are all injection moulded from a proprietary material, with the Black Series being made from compressed landfill materials.

There’s a brand-new series coming in September (which you can see a preview of here), and while they’ll follow the same premise as the existing plectrums, their thickness has significantly increased. Ideal for people looking to go a little further with their choices without breaking the bank, Rombo offers a good-natured, slightly darkened take on the modern plectrum. Check out the Horizon (it’s my fave).

Sertkaya
A hidden gem in the landscape, Oktay Sertkaya has been quietly making some understated, handsome picks for a little while, and I think it’s high time people started looking more closely at them. Injection moulded and adorned with the makers signature concentric ovals, they’re ideal for the player who finds the Jazz III and XL a little small, but wants to go wider rather than taller.

While Sertkaya focuses on a couple of shapes, there are a variety of materials to choose from. Though these are described as Soft, Hard, Extra Hard, Organic and Bio, the injection-moulding/hand-finishing process is present in them all. There’s a bevelling option, as well as finishes from Matte to Polished, and the use of recycled plastics is thoroughly present.

Oktay seems to be a keen fusion/jazz player, with the considered and urgent tone of his picks reflecting that. If you want to rip up the board with determined fervour, get your hands on these straight away.

Moving into the realm of wood and metal, David over at WooDo started posting on Instagram on the 7th of May 2021, sending me some picks out in the last few weeks.

The first few pieces were elegant, and simple. By the middle of May some interesting shapes were manifesting, and by the middle of June, the fabulous W1 was born. David is now focused on locally sourced woods and Richlite, which is a tremendous pick material. Resilient and good-looking, it’s great to see it in use.

To go from the initial stages to the picks shown above in such a short time is ridiculous, particularly when incorporating elements like brass rings, burled elm dots and working with the notoriously unforgiving wooden medium. Given the potential trajectory of such an approach, and with a lexicon of incredible woodworkers in the game, there’s a huge scope for David in the future. Observe!

Sadly no longer with us, Malte Seidler of Xufoy is someone I’ve talked about a lot in these hallowed pages. An architect and devoted snooker-admirer, Malte made some of the maddest picks ever created, and seems to be known to only a handful of collectors.

Unsuccessfully Kickstarting two separate picks (the Rost and GO), he made them anyway, and a couple of years ago found himself in an email conversation with the fledgling collector now writing this article. He sent me one of everything he made, including picks in a material that was never released (and is insanely tuneful and hard despite being very thin). These picks ranged from the graphite/Ultem-based GO to the only-made-for-disco Rost, the button-like Moon and fabulously impractical pyk, nab and dob, which were made out of some kind of rubber.

Though Malte’s work will likely never be remade, those of us who got to experience it know the profound sense of joy and borderline bewilderment that goes along with using these unforgettably-barking picks.

There’s not a lot of info out there, but I’ll be doing a biographical piece as best I can in the future. In the meantime, check out the link below:

Auf Keinen Fall Erschöpfend
While this list is brief, this is by design. Not every country we’re going to visit is full of makers, but everywhere has at least 5. These articles won’t be confined to just the modern era either, but let’s start there and see how we go.