On Form And Function 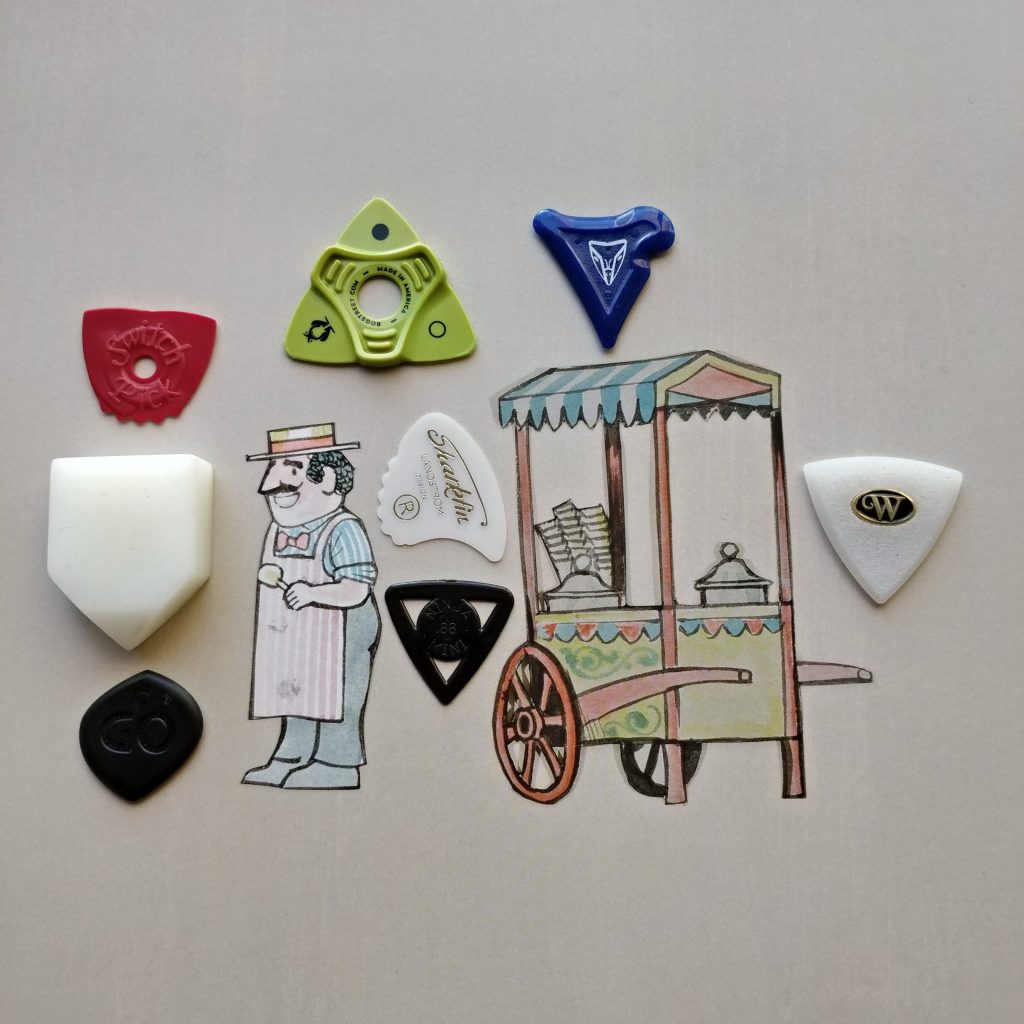 When you think of a plectrum and its shape, the most likely silhouette that comes to mind is that of the teardrop 351, or perhaps the Jazz III. That combination of wide shoulders and a tapered tip has come to define the pick in the eyes of many, both musicians and non-musicians alike. There’s nothing to state that this is compulsory, nor is it the only way of working, and in this article I’m going to talk about my experiences of the myriad approaches I’ve encountered in the Plectroverse.

Out At Sea
The most obvious example of diversification from the accepted norm set down by D’Andrea in ’22 and perma-stamped into existence by Dunlop in ’81 is that most polarising of plectrums, the Sharkfin. Developed by Swedish musician Stig Landstrom, who sadly passed away in 2007 at the age of 85, the idea behind the Sharkfin was that the leading edge would do the work of a conventional pick, and that the raised bumps, when strummed with, could be used on the harmonic bite points past the fingerboard in order to generate a 12-string effect. Though other picks have tried to replicate this in recent years – such as the universally reviled Jellyfish – the Sharkfin managed to catch on enough to be taken on in an alternative form by Dunlop, in addition to being copied by companies like Alice.

Whirligig
The Sharkfin was by no means the first pick to stretch the bounds of the conventions of the 351, and if you cast an eye over Will Hoover’s essential Picks! you’ll see a number of ‘helicopter’ plectrums with a central hub and three ends. While these haven’t persisted into the modern day – likely owing to their slightly clumsy operation, the multi-end approach has found favour with companies such as Bog Street with their Leap model, and English makers Switch Pick, both of whom offer multi-tipped plectrums. The concept behind these designs is to offer the player a softer end for strumming work and a harder tip for lead, with Switch incorporating some of the Sharkfin’s DNA in its raised third side.

Right Out
What about picks that eschew convention altogether? The best example of this in my experience has been Xufoy, whose plectrums were designed by a German architect called Malte Sadler. Models like the GO celebrated asymmetry, smaller physical size, a single holding approach and a curiously bullish attack, while the Rost was based on a wire-frame design and meant to be used exclusively for disco. These picks showcase a different physical approach to playing, and ably demonstrate how a plectrums’ ergonomics can have a profound affect on note bloom, leading edge, sustain, depth and fundamental tone. One of the bigger names in the outrageous-shape game is Hufschmid, with designs like the utterly dominating Ergo Anvil. Brutal to the point of intimidating, these defiant structures seem terrifying at first, but when deployed in the manner for which they were designed, demonstrate a speed and slickness that their shape would never indicate. I was amazed when I got a 10mm Huftech Anvil that it moved as fast as it did, something that continues to surprise me.

Getting The Hump
A big part of all of this is what you’ve got access to. With the exception of the aforementioned Sharkfin, most shops don’t stock plectrums that exist at the more outlandish end of the scale. This is hardly surprising in a sense, but imagine this – if shops only stocked picks with a thickness of 1mm or above, we’d all accept that as the norm. It’s a bit like how you’d feel about a Dean Razorback if you’d spent your whole life playing acoustic – someone rocks up with something you’ve never seen and suddenly the world is a different size. Putting a Plexstrum XXL next to a T1 Standard might seem like an extreme comparison, but they’re both plectrums, and can therefore be used for playing the same piece of music, on the same guitar, by the same person. Is one right and the other wrong? Only the player themselves can tell, and the only way to know how you feel about it is to try them for yourself.

As I’ve pressed on with the Rep, I’ve found that the stranger shapes are some of the most exciting. While I know I can always fall back on a 2mm 500 series or an Ultex XL, experiencing the wider world has given me a new appreciation for the variety and depth that can be found in companies such as those mentioned above and their contemporaries, like Polyspectrum, Winspear and so on. If you see a mad-looking pick and wonder what it might be like, buy one and try it. It’s not an expensive test, and it might change how you feel about playing forever.