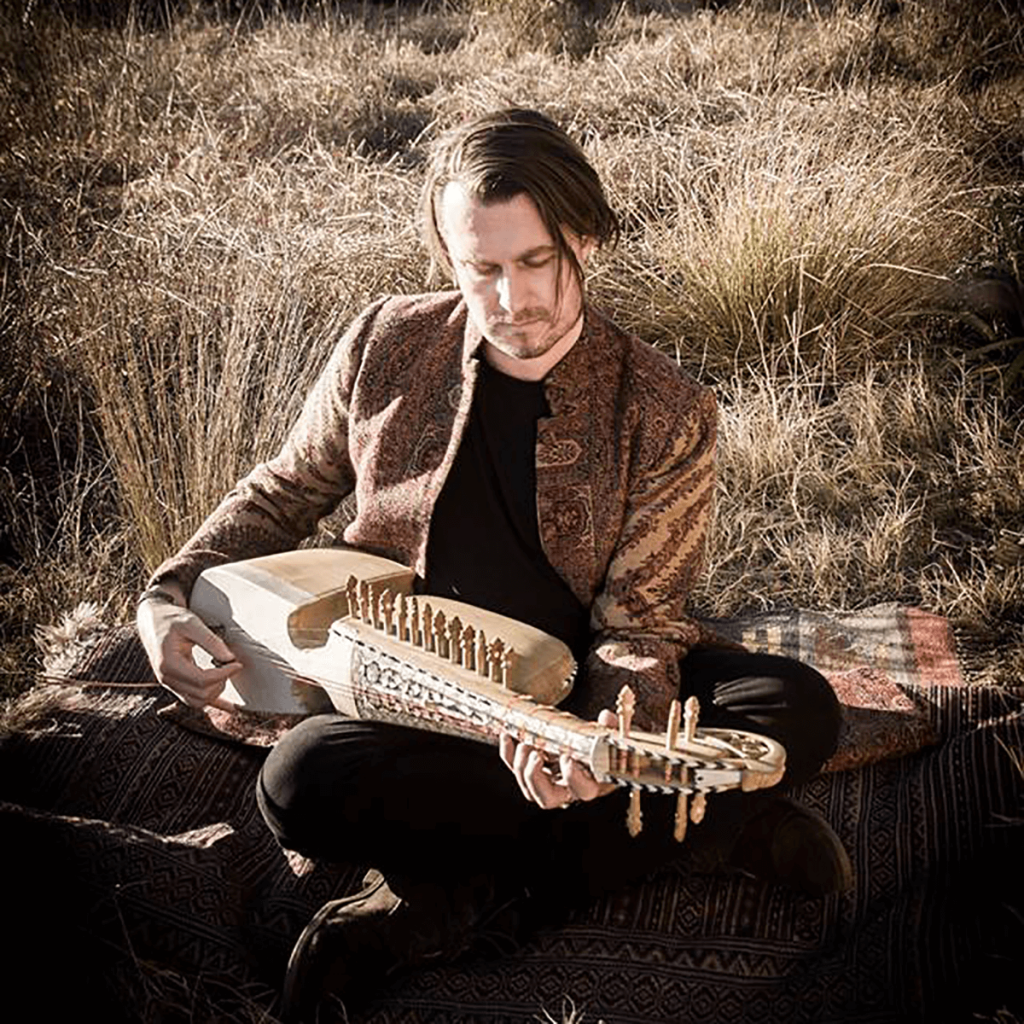 Head honcho of not one, but two fantastic record labels and with a diverse, mesmerizing track record behind him, I’ve been wanting to talk to Lachlan Dale ever since I stumbled across the first Serious Beak record. Proficient on guitar, bouzouki, rubab and setar among other instruments, I jumped at the chance to talk inspirations, techniques and picks with the man himself.
– JTD

HR – Thanks for talking to Heavy Repping! For the people who don’t know, can you introduce yourself?

LD – Gday, my name is Lachlan Dale and I run Art As Catharsis and Worlds Within Worlds. I also play various stringed instruments in Hashshashin, Black Aleph and under my own name.

HR – What was it that got you into playing music initially? Can you remember what your first pick was?

LD – Growing up, my Dad was always playing acoustic guitar. He had a nice, clean fingerpicking style, and I can remember just sitting near him and listening from a young age. On car trips I’d always be hearing early Carlos Santana, Pink Floyd, Eric Clapton and Deep Purple. All of that made me want to pick up guitar, so I started lessons with a particularly useless teacher at age 13. I’m sure my first pick was a Dunlop Tortex Standard – maybe 0.73mm?

HR – Given that you’ve played a number of different instruments across Hashshashin, Black Aleph and Serious Beak, do you use different plectrums for each? How did you find adapting to the differing physical approaches of electric guitar and rubab?

LD – I use Dunlop Carbon Fibre Jazz IIIs for guitar and bouzouki. The grip is amazing, and I find having a small pick helps with accuracy.

I’ve experimented with various options on rubab, and I’m struck by how sensitive the instrument is. I’ve settled on coconut shell picks, though I occasionally play around with a selection of wooden picks that Javier Gonzalez made from Boxwood and African Blackwood. The Jazz III picks sound quite nice, but they’re not really suitable for the modified grip that the Afghans use on rubab – they have this forceful, stiff-wrist technique that produces a very full, resonant sound.

Adjusting to the instruments gets easier over time, but even after two-and-a-half years of playing rubab I still don’t feel fully settled playing the instrument. I’ve had to learn a new style of picking (the wrist is kept at a 90 degree angle, and the pick is held between the thumb and the side of the first finger), and it takes a long time to build the right power, control and sensitivity. I could cheat and play the rubab like the guitar, but the difference in sound is pretty evident to those who know. I feel like I’m still learning some of the basic techniques – for instance, being able to slide on the unfretted area. The rubab is teaching me patience.

HR – How important is your choice of pick when it comes to the way you engage with your instruments?

LD – The rubab has a huge range of sounds – it’s so responsive to the pick you’re using, the amount of pressure, small imperfections. Finding the right pick is very important to develop the right picking style and developing strength.

HR – In Hashshashin particularly you’re playing a lot of changing meters with an emphasis on eastern scales. What was it that turned you on to those disparate styles? Who were the players that influenced you?

LD – Trey Spruance is probably the first to mention. I saw Secret Chiefs 3 in Sydney back in 2007. At the time I had no real grasp of the sounds they were making, or the traditions they were referencing – all I knew is that I loved this strange, deep music. They showed me my first glimpse of the sophisticated forms of music outside the Western canon.

Playing with Tim Brown and Gene White in Serious Beak was hugely influential. They really introduced me to the odd meters and polymetrics of bands like Meshuggah, The Dillinger Escape Plan and Botch. In his guitar playing, Tim would draw from people like Danny Gatton, Brent Hinds and Fredrik Thordendal. I can probably trace my eclecticism to Serious Beak, too – they were forever throwing in strange musical motifs, probably thanks to a shared love of Estradasphere.

Then there’s Earth’s Dylan Carson, who had me fall in love with the power of drone and dirge, and Bill Frisell’s wonderful solo playing.

HR – There’s an abundance of musical styles present between the music you’ve recorded and the acts present on both Art As Catharsis and Worlds Within Worlds. Which artists on the roster have made you look at your playing differently?

LD – It’s always lovely when an Australian band really forces me to up my game. There have been quite a few over the years – Tangled Thoughts Of Leaving (who are not on my roster), We Lost The Sea, Lisathe, Instrumental (adj.), HELU, Squat Club (also not on my roster), Space Bong, Drowning Horse, Bolt Gun…

More recently the artists from Worlds Within Worlds have been my source of inspiration – Qais Essar, Alam Khan, and 3,14 with Efrén López, Ciro Montanari and Jordi Prats, and Alam Khan in particular.

HR – Coming from Serious Beak into what you’re doing now, can you give the readers an insight into your writing process?

LD – Well, in Serious Beak I was really just playing catch up to the other guys in the band. I would be taught rhythm guitar parts and we’d drill them endlessly.

In Hashshashin we’ve been experimenting with a range of different approaches – sometimes I’ll bring in an almost-finished song, other times we’ll have a few riffs to launch off and spend a bunch of time improvising or writing iteratively.

These days I’ve been exploring more free form, improvised performance with Black Aleph and my solo project. With the COVID-19 lockdown I’ve spent a lot of time looping drones and exploring modes, moods and textures. I’ve been vaguely trying to draw some influence from Eastern classical musicians, with their very fluid manipulations of time – people like Pandit Nikhil Banerjee and Ali Ghamsari – though there is no way I will ever approach their level.

HR – As you’ve got quite a lot of irons in the fire, what’s been the most memorable event – or some of the highlights – of your work so far, both in label and band life?

LD – I feel very lucky to have had the chance to support bands like Neurosis, Deafheaven, Napalm Death, Suffocation and Insect Warfare early on, but after playing in bands for more than 15 years, it’s the chance to play, write and tour music with friends, to make new connections, and to see others grow that is the most rewarding. I’m still ecstatic that Instrumental (adj.) and HELU exist, for instance. Those guys are close friends, so to get the chance to release their music – which is so closely aligned with my own tastes – is very rewarding.

My pal Chris Allison drums for Plini these days. He’s always been an incredibly dedicated drummer, but it’s been wonderful to see him decide to make a full commitment to music, and then get picked up quite rapidly by a world class artist. Then there is the rise and rise of We Lost The Sea, the ARIA nomination for Zela Margossian Quintet, the chance to release music from Efrén López… it’s been a rich and rewarding path.

HR – What advice would you give to anyone looking to study eastern instrumentation?

LD – Find a good teacher. I’m just a heathen stumbling around in this world, but I might be able to suggest a few people. Ross Daly’s school Labyrinth, for instance, looks fantastic.

HR – Hammering as we are towards 2021, what’s in the pipeline for you and your collective endeavours?

LD – I’ve been slowly assembling a solo release for most of the year. It’s been a strange process without a clear endpoint, but I have a bunch of tracks with contributions from people like Peter Hollo (Tangents), Simon Dawes (Instrumental Adj.), Michel Gasco (Orontes), Chris Allison (Plini, Instrumental Adj.) and Jatinder Singh Durhailay. I might end up releasing a collaborative album first, then working on a ‘proper’ solo record.

I’ve been laying down some rubab for Brisbane jazz ensemble Waqef, and psych/worldbeat producer James McKenna recently, which has been a good challenge. I’ve collaborated with Conor Ashleigh on another short film, the soundtrack of which is me improvising on the Persian setar in an experimental reverb chamber. We’ll finish off Black Aleph’s debut at some point, and Hashshashin have a new track we’ll drop sometime soon.

Much and many thanks for speaking to HR! – all the very best!