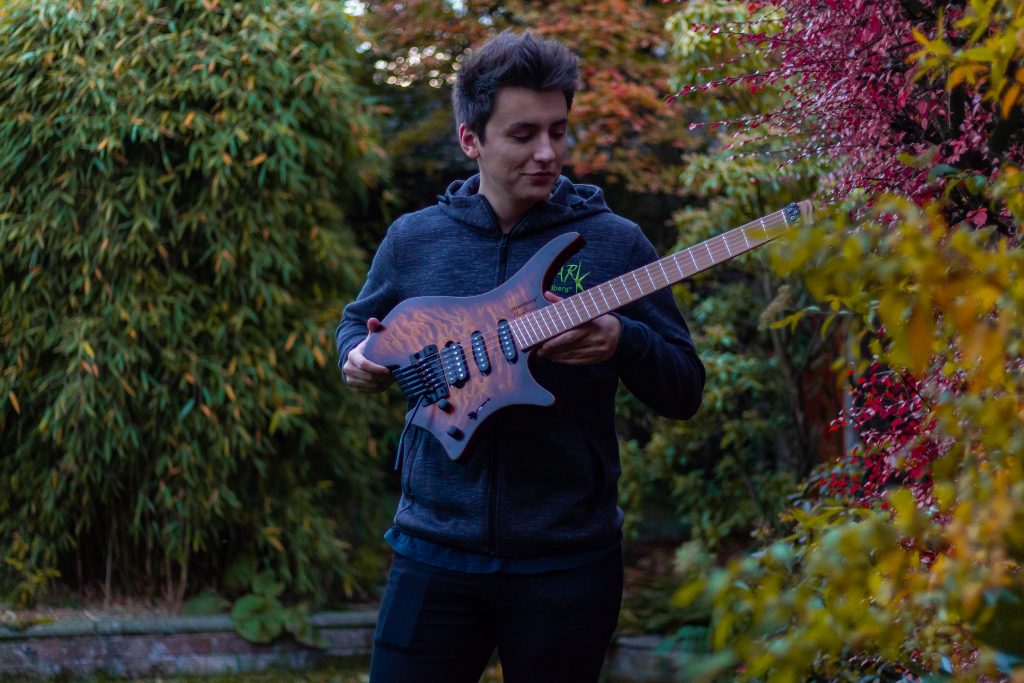 It’s an exciting time to be a young guitar player. Guitars are made specifically for certain fields of endeavour, and the generation that grew up practicing to machine-perfect records are making the guitar evolve into uncharted waters of technicality, melody, and composition. One such player is the exuberant Connor Kaminski, a Stone Age endorsee responsible for some thoroughly modern, fleet-fingered majesty. I sat down with him to discuss headlessness, the beauty of stone, and the solidarity of the modern guitar community. Read on!

HR – Thanks for talking to Heavy Repping! For the unaware, how would you describe your style of playing?

CK – Glad to be here! I’d describe my guitar playing as hopefully a familiar approach to the instrument, but offering something completely new at the same time. I’m looking to write guitar based music that’s instrumental but can also be enjoyed if listening casually.

HR – How did your relationship with Stone Age Picks come about?

CK – I first discovered the company when Dan Griffin started using them on his Instagram videos. It’s kinda funny, I had always been super interested in collecting rocks, stones, quartz and fossils when I was a kid (weird hobby I know) and I forgot about my interest until finding Stone Age. It was the perfect combo of something I’d cared about when I was young and something I care about now (the guitar). I first ordered a jazz style around August last year and immediately loved the raw tone from the agate connecting with the metal strings. It was later in the month that Matt contacted me to work out an endorsement deal. I remember the butterflies reading that message and instantly saying “YES”.

HR – What plectrums were you using before? What weren’t they doing that Stone Age do for you?

CK – I’d always been messing with Jazz III style picks for years. I had never had any outright issues with those picks but I could wear one down in a matter of days with how much I used to practice. Stone Age picks obviously excel in this area and it is one of the many reasons I love them more than any other picks.

HR – How important is your choice of pick in accomplishing what you want to say on the guitar?

CK – I want something that I almost forget I’m holding. Something that just feels 100% natural. I don’t want to fight against the pick or feel it connecting oddly with the strings. Stone picks solved everything. The connection between string and pick felt like an overhaul and an upgrade.

HR – When did you start your love affair with Strandberg? What do they do for you that conventional guitars don’t?

CK – Strandberg guitars are something else. I found them watching the Plini music video for “Ko Ki” way back in 2014. I saved up all the money I had at the time and it wasn’t until the 2015 autumn that I bought my first Strandberg. It arrived in the morning just as I was leaving for a full day of university studies and I can’t explain how much I just wanted to stay home and unbox the guitar. When I eventually did, I knew there and then that it would be the only guitar I wanted to play. It’s a completely fresh design of the guitar that the industry needed. With a real and honest focus on ergonomics, it completely won me over in seconds.

HR – Who were you listening to that got you to pick up the guitar? Which players get you excited now?

CK – Matt Bellamy from Muse, Kirk Hammett, James Hetfield and John Petrucci all made me pick up the guitar every single day. When I was a lot younger, I wanted to sound like them and I wanted to be in bands just like theirs. These days, you can see so many amazing guitarists a few clicks away because of social media like Instagram. People like Cameron Brown (@cammybee1), Tomas McLaughlin (@mcrocklin), Stephen Taranto (@stephentaranto), Plini Roessler-Holgate (@plini) and Aaron Marshall (@aaronintervals) inspire me every day.

HR – What do you think has brought about this new interest in headless guitars?

CK – The design. Ola Strandberg was one of the first luthiers to really nail a serious headless guitar design with a real ergonomic approach. Other companies have followed his footsteps and lots and lots of iconic guitar players now own headless guitars. If you see your favourite guitarist with a headless guitar, you’re going to want one as well.

HR – How do you enjoy being a solo artist in the instrumental/djenty field? Is there a sense of community between the players?

CK – I have to thank the community for everything. The amount of support from fans and guitar players alike is truly surreal. It’s like a family.

HR – You’ve got a new record out called Somnium – who were you listening to when you were putting it together?

CK – When I recorded Somnium, I was really looking to finally get some music out there. I had been listening to Plini and Intervals and used their tracks as mixing references during the recorded process.  I am really proud of it as an EP but I really want to build upon those initial songs and really carve out my own sub-genre within the whole “instrumental guitar” music scene. I love electronic music like future bass and chill trap so I’m experimenting with adding those textures into my writing to make it more unique.

HR – What’s next for you this year?

CK– I want to release new music for sure and I want to step up my social media presence (i.e YouTube videos like reviews, tutorials, unboxing). I want to keep going in the right direction and create a bigger fan base for my music.

HR – Many thanks for the interview! Where can the readers find out more about you?

CK – Thank you so much for chatting to me! I had a lovely cup of tea whilst answering the questions! People can find me on Instagram @connor.kaminski (https://www.instagram.com/connor.kaminski).