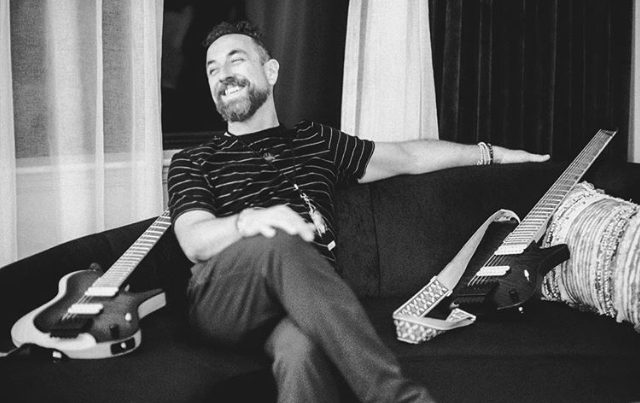 Working in the music industry can be a tough old gig, but a few people get to do something that they genuinely love. One such hard-working hombre is Chrys Johnson, who runs brand new plectrum show Player’s Pick Podcast. With a long background in the plectrum game and a genuine wealth of experience when it comes to pick development, I had to get a chat with him, so I did. What follows is a heartily good-natured dive into the world of picks, players and performance, not to mention a very specific, important memory and a bit of yoga. Don’t say HR! doesn’t do anything for you! Namaste.

HR – Thanks for talking to Heavy Repping! For those who don’t know you, can you please introduce yourself?

CJ – Gladly, thanks for reaching out! I’m Chrys Johnson, a hap-hazard guitarist of sorts for 20 something years now who enjoys a wide array of music, yoga, animals and human beings. I have worked behind the scenes in the music equipment manufacturing world since around 2006. Artist Relations, Product Development & Marketing for Ampeg, EMG Pickups, Jim Dunlop and now Kiesel Custom Guitars.

HR – What’s your background when it comes to world of plectrums?

CJ – Well other than just being a guitarist and using picks as a part of my overall guitar goals I recently have worked for the mighty Jim Dunlop Manufacturing for the better part of the last 5yrs and thankfully still get consulted and get to geek out with Jimi Dunlop himself on all sorts of pick projects…many of which are soon to be released in the next year. Working for Jimi and his incredible team really opened my eyes to the vast intricacies and variations possible in the making of plectrums. Jimi is a true artisan when it comes to picks…he is always dreaming up another approach and likes staying ahead of the curve…I am forever grateful to have been under his wing…I learn more and more from him every time we approach a new project.

HR – What was the motivation behind Players Pick Podcast?

CJ– Player’s Pick was born from a few things …one, my work with SO many incredible players in the last 5 years at Dunlop really made me a bit of a nerd about the materials, shapes, bevels, molds, grips & overall feel….two, I took my friend Moon (Zappa) on a ride-along – she wanted to see what I did for a living – and when I visited Tool in the studio she noticed part of my job involved swapping amazing personal stories…stories that she, a non musician, found really fascinating….leftover nostalgia from her backstage days eavesdropping on her dad….she said “you are a natural in your natural habitat. This is a show.” Three, no one really talks about picks and gives space to hear what the story is behind why players choose the plecs they do…until now that is! Haha and…I am a fan of hearing about creative people’s perspectives and approach to life in general…lastly, I’m always looking for incredible new music so I love that the pod is an opportunity to ask these great players of the world about what hidden gems they might be listening to or are drawing inspiration from.

HR – From your perspective, why is the pick so important to musicians?

CJ – Great question! I’m finding out so many things go into the choosing of a pick. Often times it has to do with your first guitar influence(s) as to what pick you use at first…a Father or early guitar teacher are often times who hands you your first guitar pick…it almost seems inconsequential at the time…maybe you think “I like the color of this one” and then just go at it and then at some point you notice maybe the pick you have is too flexible to play very fast you find something thicker and your style takes a little change as you explore having more resistance in and around the strings…and so on! I think picks are so important because they are often the first points of contact with your instrument…hands, picks, strings, strap & feel of guitar are all communication points …how each one relates to your particular body & emotion is relative to what you are trying to achieve of course….at first it all feels a little fixed until you find out there is a whole world of options to choose from depending on what you are trying to accomplish. Color, Shape, Texture, Material, Flexibility & Feel are all worthy considerations when it comes to choosing a pick… I find this whole process self discovery fascinating to say the least.

HR – What was your very first plectrum? What are you using now?

CJ – My very first few plecs were some Fender confetti celluloid and other random picks laying around my buddy Ryan Meranda’s place. His Dad Dave played guitar and so we were always kinda snagging his stuff in the beginning. Then we met Dan Bryant who gave us guitar lessons for a year or so …he rocked Claytons and Tortex so we used them too. Feel like Dimebag was my main reason for settling on Tortex Green for like 10 years without ever really thinking much about picks. Then my bud Zane Williams made me try out a Jazz III and I was changed…was a JIII guy for a about 4-5 yrs then started working for Dunlop and the ‘doors of pick perception’ were blown wide open…I’m now a fan of SO many shapes and styles because I have had time to let many of them finally sink in to the point where I actually get the vibe…example: for the longest time I couldn’t stand the Tortex Sharp picks that Jeff Loomis, CHON and Polyphia play but after enough time I have come around to seeing their appeal…still not my fav picks but I think I understand them better. Having been a Lead on the Dunlop FLOW pick project in cooperation with Andy James & John Petrucci I am super biased and pretty much prefer them to anything else. I like the entire range including the Tortex versions as well…a few favs are .88mm, 1.0 & 420 in the Ultex and then .88, .1mm & 1.14mm in the Tortex.

HR – As regards the podcast, who have you had on so far? Who’s on the books for coming on?

CJ – So far I have released a total of 10 episodes + episode 0 which was just a little introduction with a good friend of mine Steve Rauch (aka Steve Rock from old school KISW Metal Shop in Seattle) who I actually plan to have come back for other ‘Update’ episodes..I like him, we have fun…we also might start like 3 or 4 other podcasts if we ever figure out this dang clone machine we bought off of craigslist, maybe it’s the gestation period we aren’t giving enough focus t? Haha. Anyway…yes, the guests so far have been as follows:

Guests coming up soon as I finish some minor edits are as follows:

Plenty of other great players have agreed to be on the show…it will just take time and planning to make it all happen…really excited about a few of the bigger names that have already agreed but I’ll save that for a future announcement when everything is confirmed.

HR – Not asking you to play favourites of course, but who’s left the biggest impression on you so far?

CJ – That really is tough…many of my guests I have known now for a quite a while…that being said I will say that a few that really stick out to me are Gretchen Menn, Sacha Dunable, Tosin Abasi and Yvette Young…Tosin and I really got into some deep waters of discussion as we tend to do if we have enough time together…he’s easily one of my favourite players and homies to talk big concepts & ideas with…he gets expansive and thoughtful quick and I really enjoy that about him. Yvette and I do a similar thing when we talk but it tends to be a little more comedic and has a different mix of head & heart expression.

HR – Given the proliferation of smaller builders and increased interest in even the most minute details of gear over the last few years particularly, do you think that plectrums are on a similar trajectory to boutique pedals?

CJ – This is an interesting question to ponder. I think that logically yes, we are heading that direction as all categories tend to want to bloom into a boutique / artisan / hipster state…but picks are a smidge different …I agree in general that we should be working toward less single & limited use products in the world and the small builders are catering to and encouraging that type of behaviour with the crafting and selling of $35-$100 plectrums…but like almost all other categories the high end isn’t always realistic for most folks and on a whole we have been conditioned to the idea of picks not being an expensive part of your rig really and the issue of small artisan builders not likely to be able to replicate the kind of flex and snap you get from Tortex material without trying to be an exact copy which we already have plenty of….just look at D’Addario, InTune and now Ernie Ball all using the same original Tortex colors…shows just how massive of an influence Dunlop is on the industry. Small builders can for sure compete in plecs starting around 1mm but I have yet to see (would love someone to prove me wrong here) a small builder be able to come close in the highest selling/most popular gauges which are .88mm, .73mm, .60mm & down to .46mm in Nylon. There will always be competition in the stiff picks because you can always build a faster spaceship but in my opinion the real frontier for small plec companies will be in flexible materials that last longer and still provide crisp pleasing tonality.

HR – What’s been your most exciting moment in your plectrum history?

CJ  – When I was 16 and Dimebag Darrell gave me a small handful of his CFH Diamond Darrell / Pantera picks outside his bus around 1am in the morning…Portland Meadows, Portland OR July 10th 1994.

HR – What would you like to see happen to the musical community’s interest in picks in the coming months and years?

CJ  – Picks are firstly a tool for self expression so my primary wish is for people to not get caught up in the fashion too much but instead get friendly with a shape & gauge then just lose yourself in the playing and emoting with the thing…more actual experiences using the picks than time thinking about using them….what you think about them doesn’t matter…how you use them does…make sense?

HR – Many many thanks for the interview – all the absolute best!

CJ – It’s been my pleasure! Thanks for having me…hope to meet you person one day…keep up the great work brother John!