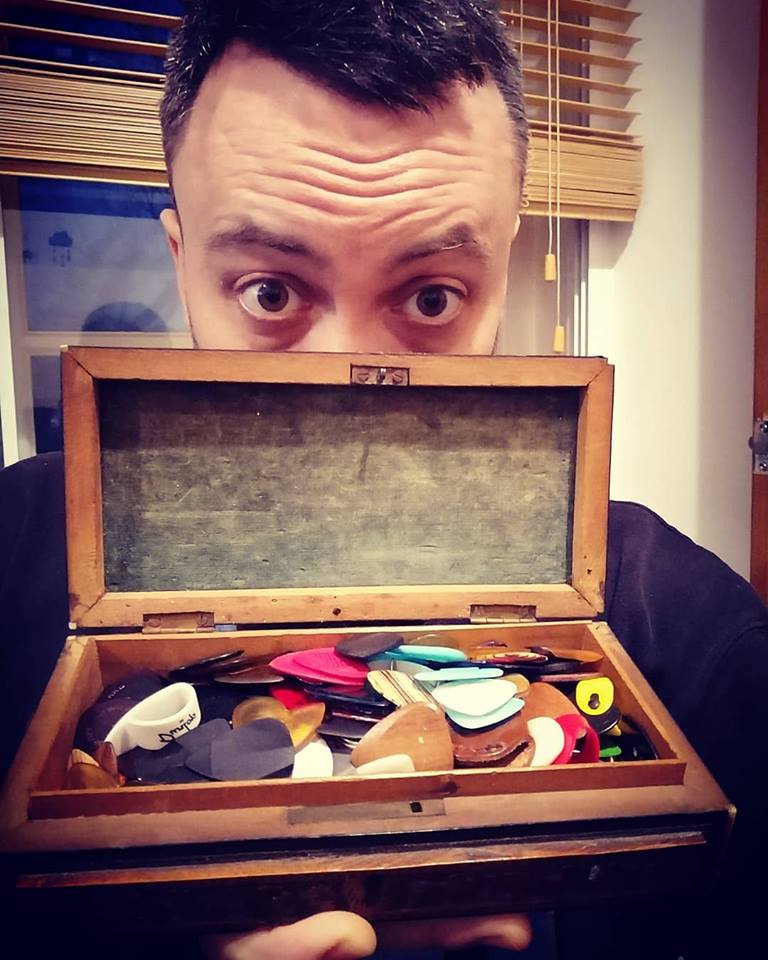 In my very first interview, I have a right old chat with the irrepressible Tom Kuppens of Vinyl & Coffee. Tom is a great man for picks, and has been a supporter of HR! since the early days, so it was a genuine pleasure to be approached by him for an interview about the blog. Below are some sections of the overall piece, but I firmly encourage you to go and read the whole thing on his website promptly. Thanks to Tom for coming to me and asking these questions!

How did Heavy Repping start?

It started with a series of one-minute reviews that I did on Instagram of the Dragon’s Heart Hardened Heart, and I found that I got pretty excited about the whole thing – who was making it, what the materials were, the stories behind them and so on. I got a reasonably favourable reception for these videos, and the deeper I got and the more picks I collected, I started to talk to the makers and discovered that no-one was talking about picks or taking them seriously. This seemed crazy to me, as they’re something that reaches out beyond the musical universe and into popular culture. Even the non-musician can recognise a plectrum, and for all these companies to be making picks and not be known, all these players who could be making better music with better tools, it was daft that someone wasn’t covering it. I started posting reviews of picks, and once I got into double figures, I reached out to a few big names in the game and found they were more than willing to talk to me, even though the site was nothing at the time. My first interviewee was Eppo Franken of Chicken Picks, and after this serious event, I got the courage up to press on – now I’ve interviewed Vinni Smith from V Picks, Ruvane Kurland of The Original Coin Guitar Pick Company, Brian Staebell at Howling Monkey, Matt Halliday of Stone Age, Tom Winspear of Winspear Instrumental, Igor from DawMan, Carlos Diez from Rombo, Chrys Johnson from Jim Dunlop, Roopam Garg of the Surrealist, Dusty Schiefelbein from T1, Pete Punckowski at Swiss Picks, Alexis Rodea at Iron Age, and Andrew Federico Jr. of Monster Grips, Brock Little at BHL, Connor Kaminski, Zoe The Pick Collector, Guy Devillez, and Nick Pagano of Gem Picks.

What have been the reactions so far about what you are doing and how you are serving the guitar world?

The most common reaction I get is surprise – the majority of players have no idea what’s out there because the companies that make the picks are chiefly one-man shows with enough time to make plectrums, ship them out and run an Instagram, and it’s rare to see any adverts in magazines. All the makers I’ve spoken to are thrilled that someone’s taken up the torch finally, and that alone makes it worthwhile. I always give people at work (Mansons’ Guitars) the opportunity to try whatever I’ve got on me, and that’s started a lot of conversations about why such things even exist, especially when it comes to exotic materials like stone, UHMWPE, Tagua and so on. Oddly, I get a lot of nods from drummers that I’ve spoken to – they understand that you wouldn’t use the same set of sticks for every style of music, so using different thicknesses/shapes/compositions of plectrums makes complete sense to them.

Have you got a favorite pick? Or a top 3 of picks? Or is this impossible to do?

I’d be lying if I said there aren’t some that stick out, and to be completely fair, I’ll state that there’s no one company I’d choose over any others. This isn’t because all pick companies are equal, but because I can’t make that choice – I’ve got close to a thousand mostly hand-made picks, so that’s a tough gig. The most important pick to me is the one a young lad sent me in the post when I was working in London after I gave him one of my earliest Gravity picks – it was his lucky pick, and I keep it in a pouch on my keys to remind me that what I do in life is worthwhile. As you’ve asked, my current favourites are the Dragon Picks Juma, the Hawk ToneBird 6, the Stone Age Pvrpetrator, the Arcanum Standard and the Plectrums Handcrafted True Blood – ask me again tomorrow!

And the last one, what advice would you give a beginning guitar player that just discovered there’s more to picks than the orange .6mm Dunlop pick he’s had for months?

There’s no one pick that works for absolutely everyone – if there was, we’d all be using the Dunlop Yellow. The best approach is do what I do – comb through Instagram, Etsy and Facebook looking for people who make picks, set up a Google Alert on your phone for guitar picks/plectrums, talk to makers, talk to collectors. Until the rest of the musical world gets into this, you’ll continue buying direct, so do your research and then take the plunge. I’m always available to answer questions, so go through the website or hit me up on Instagram and ask whatever you like. If I can help, I definitely will. To those of you who draw laughs when you talk about picks to other guitar players, remember – there’s a whole community of people who get just as excited as you do, and for every 1000 people that get excited about another Les Paul, there’s another one trawling eBay for vintage D’Andreas.