How Can I Be Sure? – What To Look For In A Plectrum 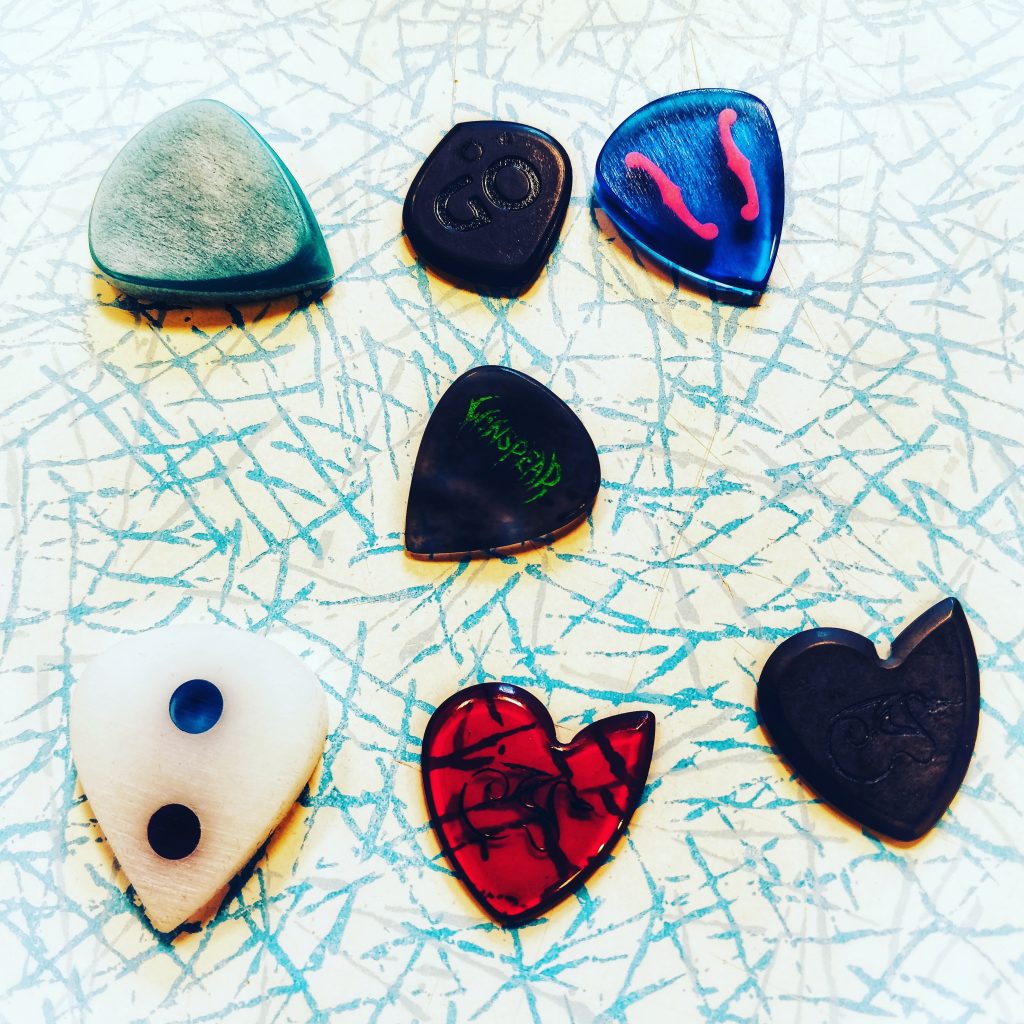 As this page establishes every couple of days, the number of picks you can choose from is really quite deep and numerous. Even smaller builders make an insane number of models, materials, gauges and thicknesses – V Picks alone make over a hundred – so there’s never been a better time to choose your guitar interaction tools.

But what should you look for? While there’s no real right or wrong when it comes to choosing a plectrum, I’ve come up with a rough guide to easing you down the choice path and make navigating the endless stream of composites at your disposal a little daunting.

Think About Your Style

If you’re a guttural goregrind player who can’t even buy trousers without trem picking, don’t get plectrums made from wood. They will evaporate, and you’ll be left with a smouldering disk between your fingers two songs in. It’s not a defined rule that harder styles need harder picks, but if you’re a genteel strummer performing Bon Iver covers having a 5mm thick Ultem plectrum will deliver an utterly uncompromising tone with no subtlety. Smaller plectrums are less widely used when it comes to strumming application in the same way that larger-bodied picks are less favoured when it comes to speed-picking. There are always exceptions (Kerry King’s massive triangles for example), but this is still a matter worth considering. A thinner plectrum is generally preferable if you spend all night playing chords, and as the feedback you’ll get in your right hand thumping away at an acoustic all night does contribute to fatigue, don’t use a plectrum you’re going to find cumbersome.

Shout At The Bevel

The way the edges of your plectrum slope is a massive part of the way you’ll interact with the strings. Flat edges take to strumming quite well because of the pendulum motion of your whole hand getting behind the pick, but plectrums with right-angled edges can hold you back as your speed increases. The combination of bevel and tip is a massive part of the pick’s behaviour, and if you prefer a flat edge but wonder what a bit less drag would be like, find a sharper version of it and give it a try. A good example of this is the legendary Dunlop Tortex series – there’s now Jazz III versions of the classic 351 88’s, 73’s etc, providing you with the same material, edges and thickness as what you’ve likely been using for years, but with a sharper point. These are finding increasing favour with players, especially those who don’t like the slight deadening effect of the traditional Jazz III. As a general, sweeping rule, round edge = softer tone, sharp edge = pronounced treble.

The material that a plectrum is made from is a huge part of how it sounds. Even if you don’t notice the sustain as much, the attack will change, and if you want a store-bought example of this, test a Nylon pick against a Delrin one. Nylon has a slightly dull edge to it, and while this is helpful in extreme genres because it reigns in the sharpness of the sound and subsequently allows for greater note separation when you’re playing at speed, it doesn’t open up your tone as much as stone or acrylic. Carbon fibre can sound very serious, and while it’s a good material for stern, aggressive music, its natural urgency robs it of the subtlety afforded to polyamide-imide, or the jaunty chime you can get out of thermoplastic. Looking into the characteristics of these materials can help you say exactly what you want. A player like Heavy Repping! favourite Roopam Garg of The Surrealist was built for using Stone Age Agate picks, because he favours clean, compressed playing with huge amounts of intricate detail, whereas someone like barmy shred-warlock Rusty Cooley uses Swiss Picks polycarbonate because he’s playing with heaps of gain and at crazy speeds – the inherent characteristics of that material stop his notes from blooming too much, meaning that even at ludicrous speed, he’s still in complete control.

One of the most important things to me is grip. The reason I got so into acrylics when I started this journey was the fact that that material glued to my fingers like nothing else, and I felt so welded to the plectrum that I felt I could do anything. As I experienced different materials my preferences changed, and as I shared my collection with my musical friends I started to understand just how personal this element of plectrum construction was.

Everyone has slightly different skin. This means that some people have hands that are always a bit damp, or dry, or somewhere in between. A good friend of mine who plays a lot of crust and grind has extremely dry hands, so when he tried to use my polished acrylic picks they were flying all over the place. Alternatively, when the same bloke tried UHMWPE, it was like someone had taped it to his fingers, whereas I struggled to keep a hold of it.

There’s been a number of different approaches to this – back in the ’50s a lot of companies added rings of cork to their plectrums, and going back even further, brass drain-cover-looking-things with ceramic surrounds were added at the tops of plectrums to improve the grip. Swiss Picks, Gravity, V Picks and others put holes in their picks to improve the grip, whether it be a cluster of holes, offset ones, or a whacking great chasm in the middle, and all these approaches carry their own merit. Aniclee from China and Italy’s Esseti even put wood discs in the middle of their picks, and Rock Hard from Cleveland coat theirs in a carbon film and engrave the top and back to give crazy hold. There’s even companies like Monster Grip supplying after-market silicon grips, which allow players who love the tone of certain materials they struggle to hold onto to get the most out of those picks, so the choice is endless.

I’ve said a number of times on both the YouTube channel and on this site that I don’t believe there’s one pick that suits everyone, and this is true. While we can all use picks as we wish, there’s always something that will gel with you more than everything else. The most sensible thing to do is to try them – luckily, picks aren’t as expensive as pedals or guitars themselves, so taking a risk that costs £20 and might change your playing forever is a lot more practical than buying a whole new amp or guitar. Even if you don’t want to shell out for something made of an exotic material, you can spend a fiver on a random selection from your local shop and see what works. Take a risk! If you’ve only ever played floppy thin plectrums, try a different material – try an insanely thick, super hard one and see how you get on. It can change the way you interact with your guitar fundamentally, and that will inspire you more than you know.