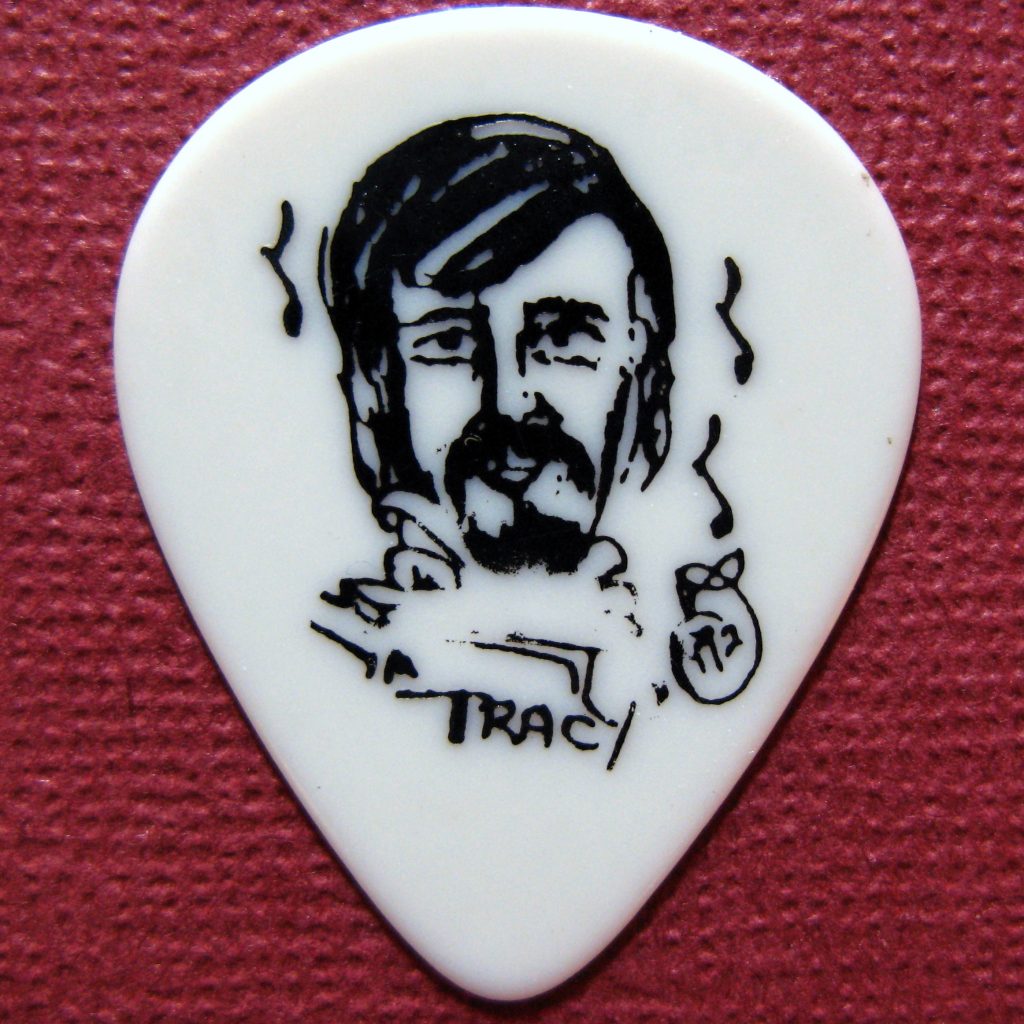 It was 1995 and much to my satisfaction, I just scored a handful of Fender Pic-Art picks from the now closed Whitaker Music store in Long Beach. As I approached the door to exit, a portly man in disheveled business attire, briefcase in hand and aware of my purchase, spoke up and asked if picks were my bag? I said they were. He bent over and put his briefcase down, rose, then extended his hand and said, “Hello, I’m Tracy Sands and I have some picks you may be interested in.”

We arranged a meeting at his small electronic business in Fullerton, Ca. where he handmade special small electrical gizmos that tweaked the sound of guitarist who used them. Tracy sold me a bunch of old vintage picks he had acquired from a music store that closed in the early 1970’s. We talked for over an hour and our conversation was just about wrapped up. I wormed my way from the back of his shop around his various work benches and tables, over boxes full of magazines, electronic gadgets and cables that had been haphazardly strewn in the narrow aisles.

Still I knew nothing of his personal pick, the one featured here. As I reached for the door handle, and as an aside to our dialog, he asked if I ever came across any old D’Andrea 348 picks, he’d like to buy them. Tracy said they were his favorite playing pick shape and D’Andrea had discontinued making them 2 decades earlier. He reached into his pocket, withdrew clutched fist, opened his hand showing me his personal D’Andrea made white 348 with his image on it. He said he was running low and the pick he was displaying was what he specifically wanted more of. I instantly recognized the pick as the one seen in Will’s book PICKS!, which had just been released a few months earlier.

Tracy told me he contacted Tony D’Andrea in late 1992 and asked if he would make him the 348 shape as a special order knowing they had been discontinued. Tony agreed to do so and would even print an image if he had one. Tracy remembered that over the summer of the same year (1992), while walking one of southern California’s famous beaches, a starving artist offered to do a quick sketch of Tracy’s face for a few bucks. The image that the anonymous artist produced in the summer of 1992, was now on a pick in the winter of the same year.

For his book, Will Hoover collected many picks in his ride across the U.S. in the early 1990’s and the Tracy (The Sandman) Sands ended up being one of the group appearing on page 81, making this pick a little piece of his-story. The Tracy Sands offered here was given to me personally by Tracy Sands in new condition.