By My Hand – Top 5 Thumbpicks 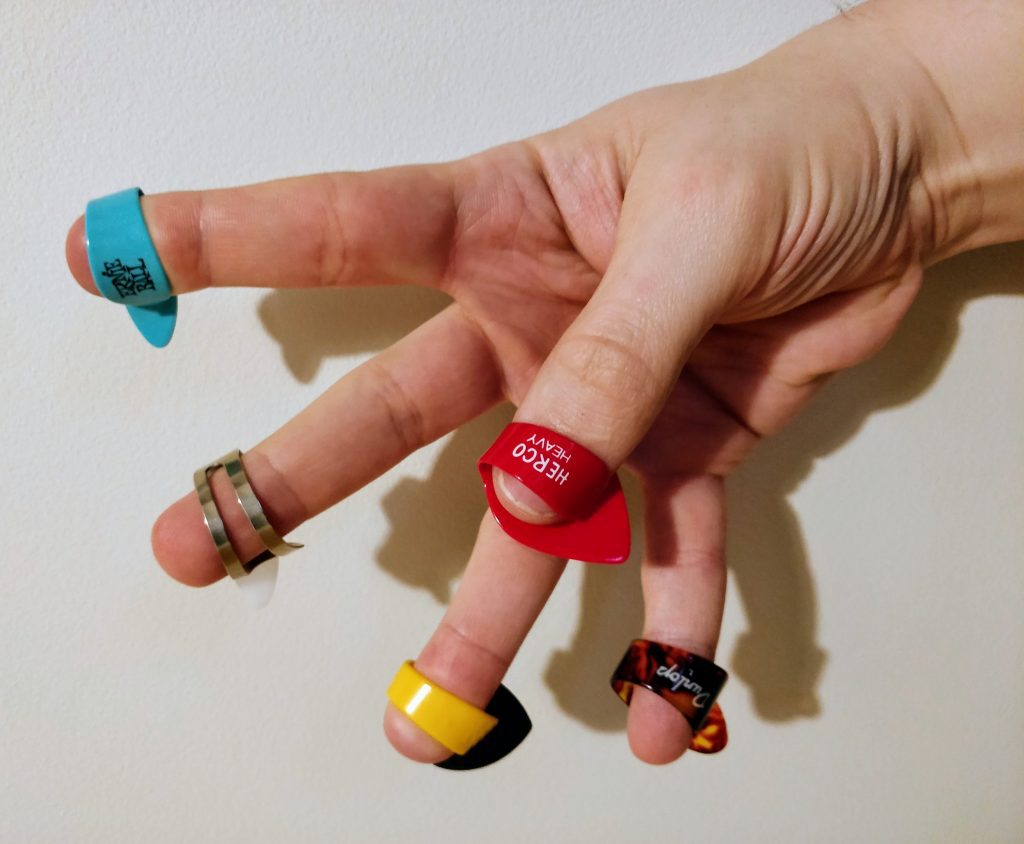 With most of the plectrum community seemingly geared towards trying to reinvent the flatpick, I felt this would be a good time to have a look at that most celebrated of tools in the country pantheon – the thumbpick.

Thanks to some serious wrist problems in my past, I’ve spent a fair amount of time using one of these to correct my picking hand, and it worked. My natural curiosity led me down the path, and I assembled a small but diverse selection of thumb-only tools, so here is my current top 5.

It’s almost guaranteed that you’ll have had one of these at some stage, tried to make it work, failed, and gone back to thrashing away with an .88, but this is one of the best thumbpicks I’ve used. Made from ‘shell plastic’, the 9022 is large and comfortable, with a solid, focused bass response and a seriously charged character. Like many thumbpicks it’s absolutely useless for strumming, in case you were thinking of doing that. Don’t worry, I’ve got just the thing.

Technically this is the second entry for Dunlop on this list, but it’s a Herco so we’re somewhat inbetween two stools. This is the pick that infamously fixed my wrist when it went wrong, and for one good reason. Essentially a large, vented celluloid plectrum with a thumb loop, the Heavy is a must for players who don’t thumbpick often and need to feel at home, or for players so used to a thumbpick that they need a loop in place when they strum. Both these things are fully possible with the Heavy, and although the sound is a bit thin and ponky, it’s so convenient that it’s hard to complain. Avoid the Extra Heavy, as it feels like your bones are being broken and doesn’t sound any better.

Made from Cellulose Acetate Nitrate, this long effort is a spanking bit of kit if strumming chords is something you wouldn’t even consider with a gun to your head. Comfortable and possessed of a very present sound, the Thumbpick (it doesn’t appear to have a model name) is very much exactly that. What it lacks in bottom end it makes up for in considered attack, and the fact that it’s thinner and less stiff than the equivalent Dunlop gives it a certain genteel quality to its hard-nosed cousin.

If you know anything about thumbpicks you’ll have been expecting a Fred Kelly, so here it is. My original one of these fell out of my bag at a gig, though a friend of mine came through for me with one that he didn’t use. The BumbleBee is unique in the sense that the pick part is height adjustable, and although it’s easily one of the most uncomfortable thumbpicks I’ve ever used – I believe the loop to be too small – the tone is exactly what it’s meant to be, a haven for those players who like country picking, old swing, and the sort of stuff that Johnny Hiland can play but I definitely can’t. Included on this list for its adjustability and fabulously clipped, muted sound, this is a must if you like old jive.

This is predominantly a banjo pick that I bought out of morbid interest, as I play the banjo like a chef does mechanical engineering, but it’s a very, very fine piece of equipment. ProPik make all sorts of tools for the banjoist, and this strum-free part Delrin/part Nickel Silver number is a beast for fingerstyle. Controlled to the point of being positive and quite grand sounding, it earns an extra 5 points at least for the metal part, which allowed me to easily bend it to my thumb’s shape. Once in place it was extremely comfortable, and the bass response was both accurate and beautifully presented. I’m intrigued by their Thumb-Flat Thumb model, which is their take on the Herco, so stay tuned.

I’ve put links to these very products in the titles of the list, so go and check them out.