Be Natural – Plectrums From The Wild 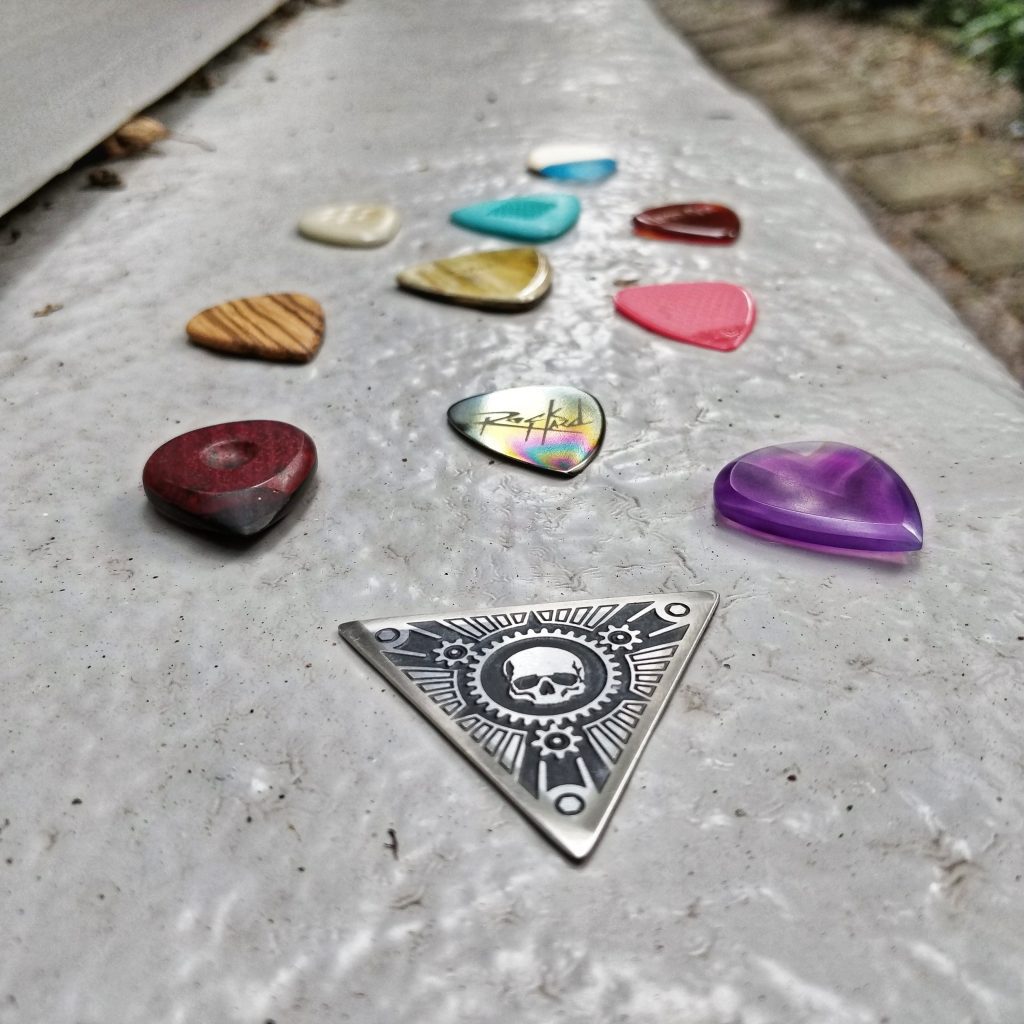 Since the invention of Celluloid, the medium of plastic has dominated the Plectroverse. This is hardly surprising – plastic is cheap, practical, malleable, and attractive, with a certain surety to its nature that makes it ideal for use in the plectrum field.

Developments in plastics and the proliferation of materials like Acrylic, UHMWPE, PEEK, Kirinite, Ultem and so on have meant that there’s more choice than ever for players and makers alike, and while this is great and extremely exciting, there’s an undercurrent of companies coming through with more ecologically sound ideas. HR! is a big fan of these, so I’ve collated a number of substances and builders for you, dear reader, to consider when looking at picks from the side of nature. Links for each company are in their names at the bottom of each section.

Wood
The most frustrating of all the substances is first on the list, wood is one of the oldest alternatives to plastic still on the go. Renowned for its unfortunate predisposition to wear, wood is still an extremely satisfying material to use. In an unfinished form, it means borderline-non-existent string noise, deep, meaningful tone and an oddly secure grip. When lacquered, the grip improves significantly, and pronounced chirping is paired with much higher durability. From personal experience, I’d honestly state that for clean, rich acoustic work it’s hard to find a better material. When people talk about it wearing down, that depends on the type of wood, how hard you are with it, and how much you use it. If you look at picks as tools – which is exactly what they are – then use your favourite wood pick for recording where it really matters, and choose an approximation for live work if you’re concerned.

Tagua
Ah, Tagua – light of my tonal life and my current favourite material. As demonstrated in the video a couple of weeks ago, Tagua is the most likely choice to become an alternative to plastic in a real-world sense. The pure-celluloid nutty yield of the Ivory Palm, it’s got a superb, lively tone and is easily shaped, dyed and harvested, with the nuts being abundant and relatively cheap. I’ve played these in thickness from around 2-3.5mm, and thick Tagua is something that keeps me awake at night. Something about it sounds alive – I don’t know whether this is just a perception of mine, but the feeling of it and the behaviour of it from a tonal perspective is extremely satisfying, and I’ve found myself coming back to it again and again. It’s one of the few materials that I like on both acoustic and electric, and for that reason alone I think it’s worth investing in. Its physical nature means that it’s as easy to shape as Epoxy but it’s tougher than bone or ivory itself, and I’ve known a few techs to make nuts out of it as well. It also gets slightly sticky where your hands are, giving it excellent live grip, and as long as you don’t immerse it in water for an extended period (though mine did eventually straighten back out again), its predisposition to curve slightly will be kept at bay.

Stone
Anyone in the tech-metal field will tell you that stone fever is snaking through the community like a virus, and rightly so. While there’s lots of examples of different stones like Jasper, Labradorite, even Jade and Gideon Meteorite to be found, the most common type is Agate, which is a lot more practical. I’ve played a number of different thicknesses, bevels, sizes and consistencies, and one of the most intriguing things about it is how each one varies in a very subtle way, with its own EQ set and behaviour. Stone is, of course, extremely hard, and I’ve only known it to chip rather than shatter – anyone working in this medium tends to make the plectrums over 2.5mm, as this yields the greatest structural rigidity and the most tone. The note separation and single note work is the greatest asset here, though the durability is something else. Let’s not forget that with a material like Agate, you could be using that pick for years, and putting aside the perpetual ‘what if I lose it’ argument, it makes much more sense to buy one pick for £20 and use it for 5 years without any wear than it does to buy hundreds of plastic ones and lose them. Take it from someone who knows – I’ve lost one pick this year and it did happen to be a stone one, and the loss has affected me deeply. Don’t lose your picks!

Metal
Ever since the TechPicks in the ’90s, we all know how we feel about this, but I’m going to make the case for metal. I’ve been lucky enough to play a number of metal picks, from coins to painted aluminium to carbon-coated steel, and I can tell you that the tonal benefits are significant. Both steel and aluminium aren’t bass-abundant, but what they lack in bottom end they make up for in speed, clarity, note separation and definition. Because the material is so strong, very little of it is required in order to deliver the goods, and nowhere will you find a more succinct example of this than the frighteningly-thin T1. Clocking in at 0.3mm, they’re the thinnest picks I own, but harbour crazy poke and loads of quality tone. Coin picks are a different story. As the composition of currency varies massively worldwide, so does the tone off each pick. Chirping is almost guaranteed, but the power I experienced with coins is hilarious. I’ve only ever got such brutality out of a Wegen Trimus, which was designed for downstrokes only, and I’d go as far as to say that my coin experience was up there with that.

Horn
I’m fully aware that this topic ruffles feathers because it’s part of an animal, but as horn is still widely used in the pick community – especially among Jazz musicians – its nature needs to be addressed. As we’re no longer using tortoise shell for picks, a lot of players turned to horn – usually cattle horn – as a material, and its thick, donky tone (when cut into heavy slices) was heavily adopted by traditional jazz players the world over. I’ve found that it works best over 2mm, and having played plectrums varying in thickness from 1mm to 3mm, would definitely err on the heavier side. It can be very brittle if not finished properly but if you want that gypsy tone especially, it’s definitely worth a look.

Recycled Material
This is a fresh one in picks, at least in a viable way, and information is only beginning to manifest recently, but anything that uses recycled materials is alright by me as long as it still works. The two principle companies I’ve come across are Rombo and Earth Picks, who both use recycled substances, albeit from very different stances. Rombo use pre-consumer textile waste and Earth use recycled plastics, with both being very sensible money and delivering very reasonable tone, and both sounding completely different. I sincerely hope that more inroads are made into this area in the coming years, as the amount of spare bits lying around to make picks out of must be demented.

There are also alternatives like bone (usually camel or cow), copper, bronze, recycled casino chips, glass etc, but as I have minimal experience of these, I didn’t want to speak on something I know very little about and mislead you. If there’s a material you wanted to know more about, hit me up at [email protected] and ask me.