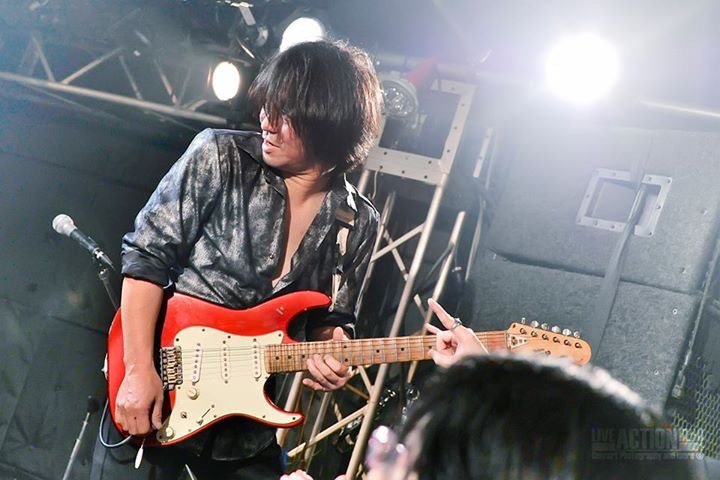 みなさん、おかえりなさい！It’s a new year, and to celebrate, our Japanese correspondent Chuck Kirby goes on the trail of shred-heavy legend Yoshiyuki Watarai. Read on immediate as they talk picks, prowess and technique in our very first article of 2022.

Greetings guitar pick aficionados.  To kick off a new year here at A Deeper Focus, I present to you my interview with Yoshiyuki Watarai (由悠季 度会) , who is one half of a killer twin lead guitar attack from the Japanese prog/power metal band, Mastermind.

I engaged in several discussions regarding choice of guitar picks and gear with Yoshiyuki, who was one of the band’s founding members – he teamed up with fellow guitar player, Yoshiya Satou (佐藤義也), to form the band in 1995.

Mastermind released 4 full length albums from 2000 to 2006 in Japan. After a 9 year hiatus, they released an EP titled AMXX that showed great promise for a strong comeback in 2015. The songwriting was always of a high quality, but on the new EP, the band was clearly taking it to the next level in terms of musicianship and approach.

Sadly, Yoshiyuki was challenged with an undisclosed health issue in 2018 that sidetracked the activity of the band, but he hopes to be back in good health again soon to resume the creation of new music and hopefully a new release.

Before I proceed to the interview, I want to also briefly cover a bit about Yoshiyuki’s main guitar and his gear. As can be seen in his photos, his main guitar is a Strat style red ESP-195SEC that he custom ordered from ESP in 1987.    This guitar has been a mainstay for him now for many years and has an Alder body and a Maple neck with 3 single coil Seymour Duncan pickups.   It has a volume and tone knob, a 5 way switch and direct switch. He is not one to load up a pedal board with lots of stomp boxes, and just uses a Maxon OD-9 for overdrive going through a Marshall 1959 amp. He said that this is his only equipment for live performances.

We discussed the future of Mastermind as well and he said that although the resumption of band activities is still undecided, he continues to write new songs and the band is still talking about releasing new music.  He was very optimistic about his future in music and felt sure that his illness will be successfully treated and he would definitely return to the music scene hopefully soon with an announcement of a new project.    He said look forward to it!  I’m a fan of the band myself and certainly do hope that they make a strong comeback.

As mentioned previously, Yoshiyuki is half of a dual lead guitar attack with his bandmate Yoshiya Satou and I have every confidence that the next instalment of A Deeper Focus will be my interview with Yoshiya as well – watch this space!

CK– At what point in your guitar playing career did you really start to focus on what type of pick you were using, and what were you looking for in a pick that would really help you to create your style as you wanted it to be?

YW – When I started playing the guitar, I used various picks. I tried Teardrop, Triangle (it’s called “rice ball” in Japan.) Jazz, home plate, everything. The thickness was also from .8 mm to 1.5 mm, from metal picks to tortoiseshell. By the time I was able to play a song, I settled down to about 1.2 mm, which was a jazz type. The pick manufacturer I was using in my mid-20s disappeared, so I changed to a teardrop type 1.14 mm. I changed it to 1.5 mm 5 years ago. Now that I think about it, I think it best suits my current guitar style.

CK – Tell me about the gauge of the pick that you prefer and if you prefer a certain shape.

CK – Is there a preferred material that your favorite pick should be made of?

YW – I like the Delrin picks I’m using now.

CK – Please describe how you grip the pick and if you have more than one method of grip and how you change the grip to use different techniques if that’s part of your repertoire.   Some players incorporate finger style picking techniques while concealing the pick in their palm or fingers and then bring it back into use during a song.

YW – Basically, I don’t do much changing of technique. Sometimes I may play in a finger style with the pick in the palm of my right hand.

YW – I play with the side of the pick during rhythm play.

YW – I usually use the pick for a long time, but if I feel something is wrong with the pick at a live concert or recording, I will replace it.

CK – Do you only use one type of pick regardless of what type of guitar, or song that you may be playing?   If you use other types of picks, please describe them as well.

YW – No, I’m using the same kind of pick all the time.

YW – Yes, I have done this.   I used a pick with the band logo printed on it from a band I was active in before Mastermind called Outstanding.

YW – If it’s not the pick that suits me, I use it as a promotional item.

CK – How much importance do you place upon your selection of the pick that you use on creating your style and sound and if it’s as important to you as your choice of strings, and other gear?

YW – Sound is important.   I used to use 1.14mm before, and I don’t know if everyone finds this, but in my picking style, I found that the thicker the pick, the thicker the sound, so I changed it to 1.5mm.  This works.

YW – The tone color changes and the thickness of the sound changes depending on the size of the pick.   Of course, the ease of playing also changes. I think it’s a good idea to focus on the pick as if we were trying out new equipment.    Thank you for choosing me for an interview like this.   This type of interview was fun.  Thank you♫

Check out this live performance compilation video from 2017 at the Kichijoji CRESCENDO venue, there are some great moments captured with Yoshiyuki shredding away both solo and with dual leads with Satou.

There is also a good quality audio video on You Tube of their studio version of Without Mercy from their album To the World Beyond.

Chuck Kirby is a pick collector with a love for the Japanese music scene. A regular contributor to the site, he has amassed an enviable collection of plectrums from some of the biggest names in the game, and is also camera-shy.