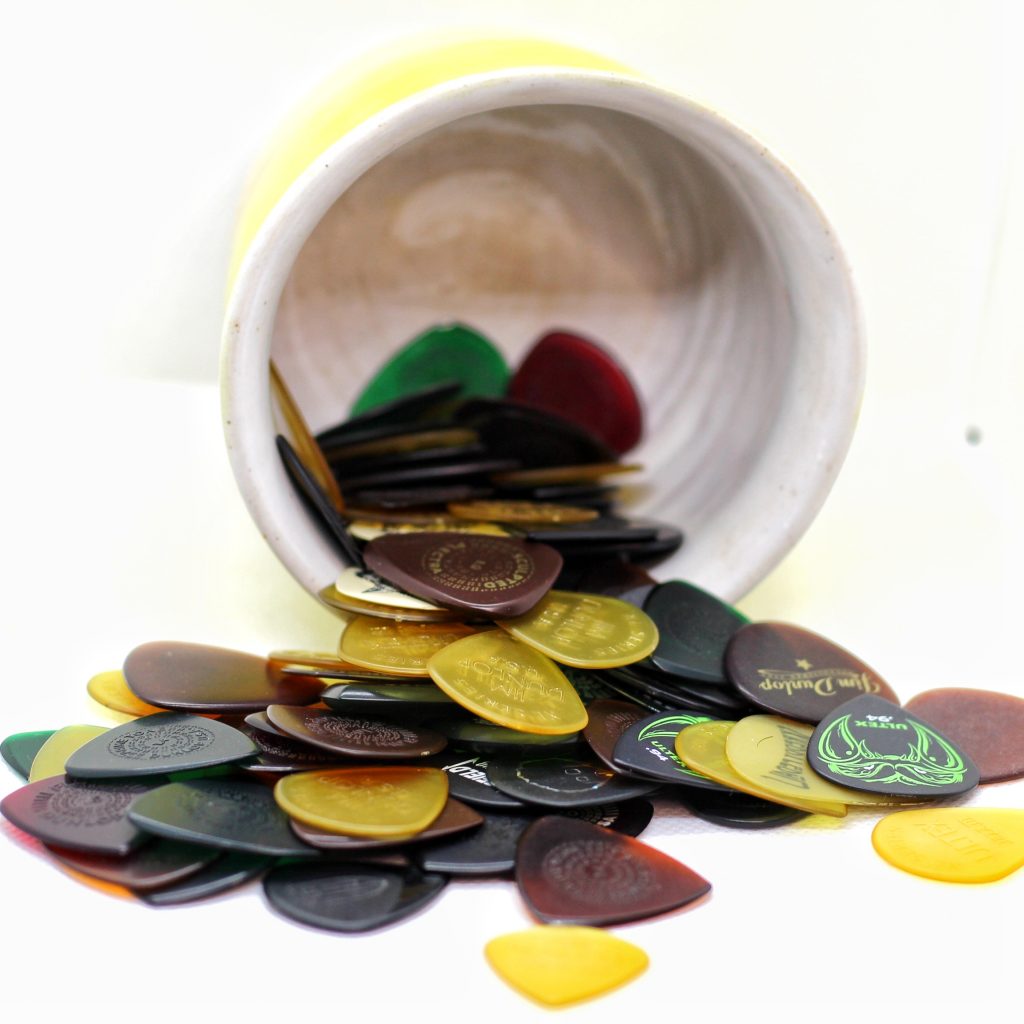 こんにちはピック愛好家! Our Japanese correspondent Chuck Kirby returns with the latest instalment in his ongoing series. This time it’s the turn of session-ace To-ru Mei (Toru Meki), who elucidates on his love for Ultem, and the importance of the pick in his performance. 読む!

Hello once again, guitar pick aficionados.  I want to present the next instalment of my series A Deeper Focus, by taking a look at the pick preferences of an outstanding Japanese session player who tours with Mr. Big’s Eric Martin. This player’s name is To-ru Meki, and he is a professional player that usually shies from the spotlight.

Well known in the guitar community in Japan, he’s played on album sessions for many popular Japanese vocalists such as Miku Sawai, Shoko Nakagawa, and Yui Horie, who is also a popular voice actress in Japan. I think you will find his responses to the questions to be very enlightening, as he goes into rich detail in his descriptions of how he plays and what went into his decision making with his choices of picks.  Photos of To-ru were almost impossible to find, so I have a video that shows him with the Eric Martin band. I hope you find his responses interesting, as he really takes a “deeper focus” into how he approaches a pick choice for many different styles of playing.

Please watch for the next guitar player from Japan that I hope to speak to soon.

CK – At what point in your guitar playing career did you really start to focus on what type of pick you were using, and what were you looking for in a pick that would really help you to create your style as you wanted it to be?

TM – When I started playing the guitar, I simply looked up and used the picks used by my favourite guitarists.
For example, Yngwie Malmsteen → Fender Extra Heavy, Brad Gillis → Metal Pick, etc.
After that, I checked the playing comfort and sound output, the tone after actually recording with a microphone, how to get used to karaoke, etc. Then according to the instrument to be played and the playing style, various picks such as pick material and thickness are selected, and I tried it. Especially when recording an acoustic guitar, I often consult with an engineer to decide.

CK – Tell me about the gauge of the pick that you prefer, and if you prefer a certain shape.

TM – The picks I use vary depending on the instrument I play and the playing style, but basically they are teardrops of 0.73mm to 1mm.

CK – Is there a preferred material that your favourite pick should be made of?

CK – Please describe how you grip the pick and if you have more than one method of grip and how you change the grip to use different techniques if that’s part of your repertoire.

TM – Some players incorporate finger style picking techniques while concealing the pick in their palm or fingers and then bring it back into use during a song.
Basically, I have a pick that feels like I’m lightly pinching it with my index finger and thumb, but I have multiple ways to hold it depending on my playing style.

It seems that I have a slightly deeper grip on the pick when playing hard backing or a solo, and a slightly shallower grip when cutting or stroking.

When changing from finger style-playing to pick-playing, I often hold the pick in my mouth, but when I have to sing a song such as a chorus, I hold it in my right hand.

As for how I play, when playing fast, I can use the movement of the first joint of the thumb, and when backing or cutting, I can snap the wrist, and when I play the stroke of an acoustic guitar, I can add the expression of the sound by bending and stretching the elbow.   I use this a lot.

TM – Instead of playing the strings as usual, I lightly hit the strings with the pick edge to change the pitch and make a sound (sound effect rather than playing).

TM – If I play all kinds of instruments such as electric guitars and acoustic guitars, I have many picks (many kinds) at one live event. If the pick is scraped and the sound changes, it is basically thrown away immediately, but depending on the pick, I may smooth it with fine sandpaper and use it again.

CK – Do you only use one type of pick regardless of what type of guitar, or song that you may be playing?   If you use other types of picks, please describe them as well.

TM – I choose the one I like from the ones on the market and purchase it.

TM – If I do order, I think I’ll put my name on it because it’s a big deal, but I’m not interested in custom picks at the moment.

TM – If I ever make such a pick and someone wants it, I’ll give it as a gift. Because I know myself as one who used to want a pick from my favourite guitarist.

CK – How much importance do you place upon your selection of the pick that you use in creating your style and sound? Is it as important to you as your choice of strings, and other gear?

TM – Given the impact of picks on playing comfort and timbre, I think it’s just as important as the choice of other equipment. The pick is also the first part to touch the strings of the guitar to make a sound.

TM – While I think it is very important, I think it is a “maze” with no exit when pursued.
Is it properly reflected in the sound output while understanding that “the person who is playing is the one who can experience the change by changing the pick the most”?   Is the “purpose and means” interchanged?   I will continue to face the choice of a pick while checking such things.

Chuck Kirby is a pick collector with a love for the Japanese music scene. A regular contributor to the site, he has amassed an enviable collection of plectrums from some of the biggest names in the game, and is also camera-shy.