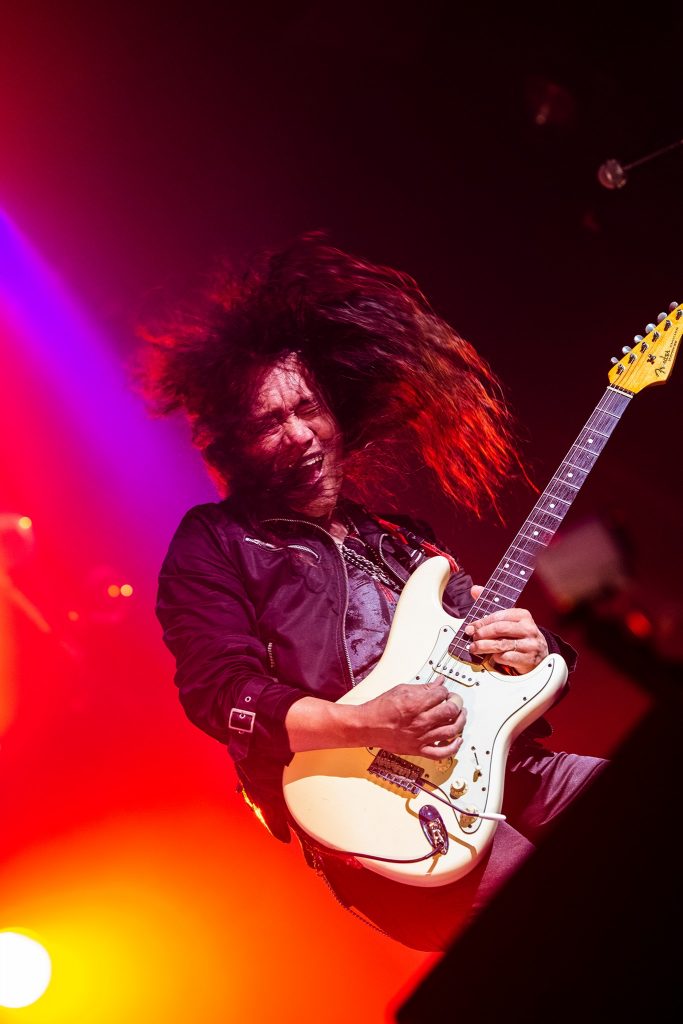 In this most recent installation of his ongoing series, our Japanese correspondent Chuck Kirby talks picks and prowess with wide-vibratoing shred lord Tetsuya Mitani. 以下の彼の素晴らしい記事を読んでください。!
– JTD

Hello again guitar pick fans of all types and shapes.  I am happy to bring to you my next interview with a veteran of the Japanese metal and shred scene, who was kind enough to respond at length about his choice of guitar picks as well as his guitars.

I found Tetsuya to be a very friendly guy. He was open about his playing and who his influences were when I first got to know him early this year. He is extremely appreciative of his fans and gives every live performance 110%.  I guarantee he never disappoints. Tetsuya has performed as a solo guitar player, but he also fronts two other bands – Emerald Aisles, and an instrumental trio called Tetsuya Mitani’s Amadeus.

Most of Tetsuya’s music is technical neo classical instrumental music with the emphasis on shredding combined with great melodies and epic themes. Before we discussed his choice of guitar picks that he prefers, he told me a bit about his choice of guitars.  Tetsuya is a truly dedicated fan of Fender and one of his main Stratocasters that he plays is a 2006 vintage reissue Strat made in America. He also plays two Japan made models quite often as well, but ‘the Strat has basically remained unchanged since it’s inception, it proves that it is a complete instrument, and can bring out any type of music in infinite ways’.   As all of the greats have played Strats like Hendrix, Blackmore, Yngwie, Uli Jon Roth, Gary Moore, and others, he loves anything that is the Fender brand, which we will further see in his responses to the pick survey.

Now before we take a look at his survey responses, I would encourage you to check out Tetsuya’s music on You Tube on his channel called emerald2040.

His official website can also be accessed here:
https://emeraldaisles1101.wixsite.com/mysite

Tetsuya is a gifted and outstanding guitar player, and really should be more well known outside of Japan, so I wanted to help get the word out here that he is a player that should be noticed and appreciated for his skill and talent, and supported by guitar fans around the world. Let’s take a look now at his choice of picks and dive into it a little deeper.
– Chuck

CK – At what point in your guitar playing career did you really start to focus on what type of pick you were using, and what were you looking for in a pick that would really help you to create your style as you wanted it to be?

TM – When I started playing the guitar, there weren’t as many types of picks as there are now, so I started with the standard teardrop shape pick (351). After that, I changed to a jazz type pick around 2000. In order to improve my own guitar skills, I change the shape to a specific shape only when practicing, depending on the content of the practice each time.

CK – Tell me about the gauge of the pick, and if you prefer a certain shape.

TM – The pick I’m currently using is Schecter, because
the type that I prefer is made by Schecter. If Fender made this type of pick, I would prefer the Fender brand of course!

CK – Is there a preferred material that your favourite pick should be made of?

CK – Please describe how you grip the pick and if you have more than one method of grip. How do you change the grip to use different techniques, if that’s part of your repertoire?  Some players incorporate finger style picking techniques while concealing the pick in their palm or fingers and then bring it back into use during a song.

TM – Prior to the Corona pandemic, I threw about 20 picks into the audience from the stage at one live event.
Now zero picks (LOL). Newer picks are easier to use than used picks, so I will replace them early when I’m playing on stage. But when I play the guitar at home, I use them until the picks are scraped and they don’t hit the strings properly.

TM – I have no partnership with a pick manufacturer. My favourite pick is only Schecter jazz type,1.00mm  at present. However regarding the pick shape, I am always thinking about returning to simple teardrop shaped picks.

TM – Yes.  About 7 years ago, I had 100 picks made with my band name of Emerald Aisles along with my name printed below it.

TM – I would always want to make them mainly as a gift for fans.

CK – How much importance do you place upon your selection of the pick that you use on creating your style and sound and if it’s as important to you as your choice of strings, and other gear?

TM – It’s not that important. The pick is a technical matter, but I attach great importance to “how smoothly can I play the most difficult and challenging things?” Regarding the sound, the playing technique part is the largest, and compared to that, I think that the change in sound due to the material of the pick does not really need to be focused on so much.

Although I use Schecter picks, the Fender pick is the best, because it is printed with Fender on it. I’m saying Fender because all things Fender are correct, it’s god, and it’s in order!

Chuck Kirby is a pick collector with an unyielding love for the Japanese music scene. A regular contributor to the site, he has amassed an enviable collection of plectrums from some of the biggest names in the game, and is also camera-shy.